Book Review: Better Living Through Criticism: How to Think about Art, Pleasure, Beauty, and Truth 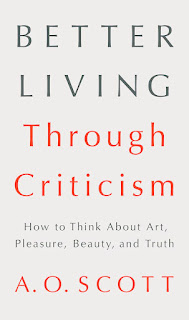 Better Living Through Criticism: How to Think about Art, Pleasure, Beauty, and Truth by A.O. Scott
My rating: 3 of 5 stars