Book Review: Interview with the Vampire 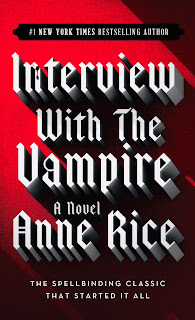 Interview with the Vampire by Anne Rice
My rating: 5 of 5 stars

Vampire narratives, far from being about the desire to cheat death, are really stories that help us to understand that even living forever won’t save us, and in this story Rice dares us to ponder whether we ourselves could even genuinely endure the endless sorrow that, without exception, so often accompanies an everlasting life.
Interview with the Vampire is a gothic horror novel by the American author Anne Rice, first published in 1976. The novel centers around vampire Louis de Pointe du Lac, who tells the story of his life to a young reporter. But from the outset Louis struggles with his vampire nature, frequently worrying that being a vampire automatically marks him as a "child of the Devil," however, it’s his darker side, or rather his human side, that is now revealed instead of hidden behind a bourgeois morality that really troubles him.
Despite Louis's attempt to cast his life as a cautionary tale, the young interviewer cannot accept the inevitability of a vampire's despairing end and his ultimate message about the dreariness of immortality has no effect on the interviewer. In the arrogance of youth and humanity, the interviewer believes he could use immortality far more wisely than any vampire who came before him and asks Louis to turn him. The lesson for us is clear. Youth will never learn from the wisdom of age and will always seek to experience things for itself.
This was Rice’s debut novel and is based on a short story she wrote back in 1968 and was composed shortly after the death of her young daughter Michelle, who served as an inspiration for the character of Claudia. “Writers write about what obsesses them,” Rice said in an interview. “You draw those cards. I lost my mother when I was 14. My daughter died at the age of 6. Lost my faith as a Catholic. When I’m writing, the darkness is always there. I go where the pain is.”
Rice’s compulsively readable novel is also arguably one of the most celebrated works of vampire fiction since Bram Stoker published Dracula in 1897. As the Washington Post said on its first publication, it is a “thrilling, strikingly original work of the imagination ...sometimes horrible, sometimes beautiful, always unforgettable.”
Some modern critics, however, have proposed that the reason readers became so enthralled with this book, or with vampire narratives in general, is because, in so doing, they overcame, or at least temporarily were able to escape from, their fear of death. The origins of most vampire myths being rooted in the fears concerning the dread of premature burial. But in Freud's view it is not actually death that people fear, because nobody really believes in their own death. Instead mourners project the idea that the recently deceased must yearn to be reunited as they do. Emotions such as love, guilt, and hate fueling that desire. Furthermore, that which one does fear cannot be death itself, because one has never died. People who express death-related fears, veritably are trying to deal with unresolved childhood conflicts or traumas that they cannot come to terms with or express emotion towards.
Which is what makes Interview with the Vampire such a human story. It’s a story in deep connection with mortality, human frailty, hunger, sex, and death, and how all these things come together to define us. But if I were pressed to sum up the theme of the book in one sentence, I would suggest that it revolves around whether or not we can authentically achieve true love in a such a hostile world, one in which God is dead and there is no Hell, just this baleful life on earth and a series of corpses.