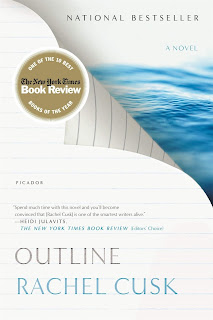 Outline by Rachel Cusk
My rating: 4 of 5 stars

The perception that some people do not like Rachel Cusk is so omnipresent in the criticism approximating her work that it’s surprising to me that no one has ever started a review of one of her books with “I, too, fucking hate her.”
She’s narcissistic, to be sure, but she’s a writer. And that’s what writers are, narcissists. But as Cusk herself has said concerning this criticism, “Society organizes itself very efficiently to punish, silence or disown truth-tellers.” But, people don’t trot down to Barnes & Noble to pay $24.95 for the truth. You have to wrap that shit in a piece of cheese so they don’t know what they’re eating.
Outline is Cusk’s eighth novel, but it isn’t a plot-driven narrative. It’s storyline, such as it is, spans a few days in the life of its narrator, a divorced English writer named Faye who flies to Athens for a short stint teaching a summer school course; she's actually one of a revolving group of visiting writers, and in ten closely observed chapters, Faye relays the surprisingly confiding, and engrossing, stories people tell her about their lives during her short Greek odyssey.
Cusk’s prose is far from musical however. But it is what I would call ritualistic. Judged purely by sound, her writing is somewhat reminiscent of those 20th-century writers who wrote obsessively and immersively about the Greeks. The monologues in Outline are controlled trances, like Stevie Nicks at the end of ‘Rhiannon’: you enter the speed and the artifice and the belief of it with her. They seem to have been written compulsively; they certainly read compulsively, and there is a relentlessness to them, an onslaught that is like the onslaught of life.
In remaining largely unknown throughout most of the novel, our narrator, Faye, allows Cusk to explore this ‘onslaught of life’ which is really, universality itself, a sort of truth, perhaps even a sort of grace. “To love truth means to endure the void,” wrote Simone Weil in her notebooks, suggesting perhaps that we should resist the temptation to fill the empty spaces of ourselves with our own stories, and instead welcome grace into the absence.
Throughout the course of the novel, Cusk very specifically and explicitly exploits the public conversations of men, which she seems to consider genial and beneficent, but which most women, very often, consider a burden or an intrusion. But Outline serves as an inversion to this public spectacle: a man bending a woman’s ear, Cusk bending our ear on the page. And as the conversations unfold it becomes very clear that they are fantasies in which the infinitesimal openings of small talk eventually drill down to the centre of the earth.
Outline explores both the way people present themselves and really the act of storytelling itself. On one level it’s an absorbing series of confessional tales, but it is also a deft, multi-layered commentary on the nature of narrative and the effects of a listener's bias and filter. As a loquacious young student in Faye's class says, "a story might merely be a series of events we believe ourselves to be involved in, but on which we have absolutely no influence at all."
If I had read this book when I was younger it would surely have been aspirational for me; now, unfortunately, it is merely a mirror of my life. I burned through the book in a little more than four hours. And it bears little resemblance to any other novel I've ever read. It’s characters were vague and unformed, but they still came through with periodic and startling observations about life and human nature that hit me like a punch in the throat. The conversations were personal and searching; and they flowed naturally and inevitably from the mundane to the ontological.
Which makes the "star rating system" I invariably default to, almost completely and totally useless for this book. I say that knowing that it’s probably just as completely useless for any other book, in truth, but that's for another discussion. I gave the book four stars. But, what does that mean? Absolutely nothing. I hated it and loved it. Full of wisdom and completely meaningless. Irritating and boring, but a page-turner nevertheless. And just like the book, my review will most likely make no sense to anyone.