My Reading Life: with Michael Sokolove 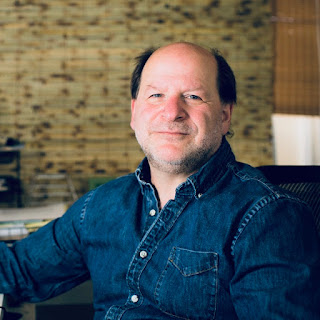 Oh my goodness, just five?? Ok, off the top of my head: The Great Gatsby (Fitzgerald); American Pastoral (Roth); The Power Broker (Caro);  Manchild in the Promised Land (Claude Brown) and the most recent book I've loved, The Incendiaries (R. O. Kwon)

The Great Gatsby, which was introduced to me in 11th grade by my treasured English teacher, Lou Volpe, was the first book that truly showed me how beautiful language can be. The sentences and the words and the perfectly constructed narrative put the reader in something like a dream state.  The Power Broker sets the standard for nonfiction; it shows what the highest possible ambition is. You can never match it but it's nice to know what the bar is.

I have never successfully read Faulkner. It's a character flaw on my part.

I have lots of books beside my side of the bed but I rarely can read long before falling asleep. I'm a sit-in-a-chair reader and I can never understand people who read for an hour or whatever in bed.

Hard to say. I feel like as soon as I could read I fell in love with it. I was a shy kid and a little bit of a loner -- I learned early on that a book was really great company.

Conversations with Friends by Sally Rooney; The Nickel Boys by Colson Whitehead.

Slaves in the Family by Edward Ball. It is an incredible mix of memoir and history -- Ball's ancestors were slave owners in the South and he writes the history of not just their lives but also of the slaves who worked on their plantations. He goes out into present-day America and comes to grips with slavery, as best one can, by searching out the family members -- grandchildren, great grandchildren and great-great-grandchildren -- of the slaves who worked the Balls' property. An incredible book and not quite as recognized as it should be.

Also: Don't Let's Go to the Dogs Tonight, by Alexandra Fuller, a memoir of her childhood as the daughter of white settler/farmers in Africa. In some ways, not dissimilar to Edward Ball's book -- a story of horrible racial oppression told, in part, from the perspective of a child of the oppressors. The language in this book, the pure beauty of the writing, just blows me away, which is why I recommend it.

And lately: A Tale of Love and Darkness by the late Israeli author Amos Oz. Also a memoir -- so I guess I must be on a memoir kick.

Two books I read in my early teens: Manchild in the Promised Land and Ball Four (Jim Bouton). They may seem to have very little in common. The first is a sort of memoir/fiction mix of a young man's coming of age in Harlem, long before Harlem was gentrified -- and it is a mix of aspiration, danger, drug addition, hope and resilience. I was a kid growing up in what seemed to me boring-ass suburbia -- Levittown, Pa., blocks and blocks of mass-produced housing -- and Manchild was probably the first book that showed me how reading can take you to a completely different place. I was curious about other worlds and Harlem was distinctly not Levittown.

Ball Four -- the iconic baseball confessional by Jim Bouton -- served, in its own way, the same purpose. I was sports-crazed. Ball Four showed me the real lives of my "heroes." What the baseball world was really like. It didn't make me like the players any less; I liked them more because Bouton showed them in all their crude, hilarious, human dimensions.

I don't remember reading much children's literature. Unfortunately I don't think I was probably exposed to much good stuff. My early schooling was all about learning to read -- phonics and so forth -- rather than the joy of reading. I think the first chapter book I read -- I can still recall picking it off the shelf of an elementary school classroom -- was Born to Play Ball by Arnold Hano. It was a biography of Willie Mays for young readers. I was probably in about third grade.

I read the New York Times Book Review to know what's out there; I should probably look at more journals than I do. My family is bookish so I can count on my wife and my three adult children to also recommend books, which is a great resource and a great joy.

I'm reading The Friend right now, by Sigrid Nunez. It is nonlinear, essentially plotless, which I don't normally like but it's so wise and funny that I'm enjoying it. This book is also, in large part, about a dog -- and even though I have a dog and love dogs I don't usually want to read about them -- but I'm really liking it nonetheless. So there you go. What you think you like or don't like can change, depending on how good something is.

Eat the Document by Dana Spiotta. It's about a 60s-era fugitive radical -- I love books about people on the run and this one is really good.

Philip Roth. I needed to be of a certain age to really understand him.

Probably Manchild in the Promised Land - and by the way, I don't think it is, by literary standards, a great book -- but it was so eye-opening.

Fiction. I want to be transported.

Cheating a little here because it's been a little more than a year, but The Incendiaries by R.O. Kwon. Each sentence is like carved out of a gemstone. You want to read them twice because they're so beautiful. And the novel is about something deep -- the allure of a religious cult, the sense of belonging and love they can bring, the insanity of them, and the feeling of loss a person can feel after separating from one even after coming to an understanding how perverse the values were.

They must have but I don't remember it. I have a much keener memory of reading to my children and now grandchildren -- books by William Steig, Maurice Sendak and others. Here I'll mention another under-appreciated book that I always recommend and that we buy for new parents: The Wedding Procession of the Rag Doll and the Broom Handle by Carl Sandberg. All about a wedding attended by the Spoon Bangers, the Musical Soup Eaters and so on.  It is beyond wonderful.

See above. Sandberg's masterpiece. No use giving, say, Goodnight Moon because new parents will get multiple copies of that as gifts. Also, as a wedding gift we often give a  comprehensive, expensive world atlas. That's a go-to.

Nick Carraway. What's he really think of all those insane people in the Great Gatsby. I'd like to use my reportorial wiles to open him up just a bit more.

Politics and Prose in D.C., where I live, which is one of the great independent bookstores in America, despite its sort of clunky name. Like any great indie bookstore, it is a cathedral of books. I have had the honor of reading there several times and it feels like a spiritual moment each time.

Everything. I can't imagine not reading and not having a book-filled home.

Michael Sokolove is the author of five books, including Drama High: The Incredible True Story of a Brilliant Teacher, a Struggling Town and the Magic of Theater,which was the inspiration for the NBC prime-time series "Rise."
Since 2001, Sokolove has been a contributing writer for the New York Times Magazine, where he has written about the science, culture and sociology of sports, as well as politics and a broad range of other topics.
His work has been included in the Best American Sportswriting and Best American Medical Writing anthologies.
Before joining the New York Times Magazine, Sokolove worked as a newspaper reporter in Philadelphia. He and his wife, Ann Gerhart, an editor at the Washington Post, live in Bethesda, Maryland and have three children.