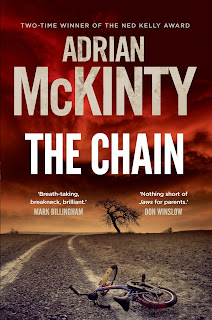 The Chain by Adrian McKinty
My rating: 4 of 5 stars

“There’s nothing that I wouldn’t do for my children.” Parents love saying this, and a few of them might even mean it. But in his latest thriller, Adrian McKinty, will test this assertion in ways you could never envision.
Those old enough to remember chain emails will likely remember the ridiculous, laughable threats that came with them. Now imagine they’re real, but instead of being told to forward an email to a dozen friends or suffer a breakup in the next week, you have to commit a serious crime, ruining someone else’s life in the process.
Rachel is expected to do just this, after she receives a phone call early one morning, telling her that her daughter Kylie has been kidnapped. To secure Kylie’s release Rachel must transfer the ransom money into an account and kidnap someone else’s child until they pay up and do the same. No Police can be contacted and each link in the chain must fulfill their obligation and perpetuate the despair. Those that break the chain, find their lives cut short by unfortunate events, as will the links on either side of them. Thus, the nefarious creator of the chain remains protected and makes each link harder to trace. As Rachel’s world implodes we follow her every move as she attempts to secure her daughter’s safety, whatever the cost.
All crime novels are, to a certain extent, morality tales, but this one is more so than most. Because beneath it’s surface, The Chain, is quite clearly the work of a philosophically minded thinker. Mckinty even has Rachel teach a class on existentialism. He also mentions Sarah Bakewell’s superb 2016 book, At the Existentialist Café. He wants the reader to understand that what they’re reading is existentialism in action, with Rachel defining herself moment by moment with each choice she makes. Read in this way, it’s a thriller on more levels than one. And one of the most chilling things about the book, is the insouciant way in which Rachel does whatever the logic of the situation demands. The book forces the reader to ask again and again: what would I do in this situation?
But because there are no moral certainties, we all inevitably lapse into error whenever we begin to think in moral terms. Nothing in the physical universe tells us what makes an action good or bad. The world is silent, it just doesn’t speak to us in normative situations. We are alone. Thus, all of our moral values are purely chimerical. All we are left with are choices. The hard part is learning how to live with them.
“I wanted to take a person who breaks all these codes of morals – in every conceivable code of moral philosophy, she does the wrong thing,” says McKinty, who studied philosophy at Oxford. “In terms of Kantian ethics it’s the wrong thing; in terms of utilitarian ethics it’s the wrong thing; in terms of Aristotelian ethics it’s the wrong thing. It’s the wrong thing to do and yet our instinct as a reader is, I’d do it too. We’d all do this even though it’s horrible.”
We have a natural resistance, however, to the idea that "ordinary" people could bear the commission, not to mention the psychological consequences, of such atrocities without going mad. And yet they do, which is both alarming and, in the context of this story, utterly plausible.
Mckinty raises a good many rudimentary philosophical questions and does so starkly. What is necessary? What is inevitable? What is justifiable? What does it mean to be a moral person? But, while interesting questions to explore, he fails to examine them as attentively as he sets them in place. Yet, still manages to tell a thoroughly absorbing story of choices made, both well and badly, and consequences stalled, evaded, suffered and escaped.
Whereas the majority of most novels are able to knit up the complex sleeve of circumstances they create, albeit, more engagingly than they unravel it. McKinty, like a lot of writers who have a great idea, suddenly seems not to know how to finish it, and the book disappoints a bit at the end, but not nearly enough to undo its mesmerizingly unsettling effects. But the climax is still, nevertheless, a poignant miscalculation. The premise, however, is by far the strongest aspect of the book and it’s the premise that will get people to pick it up in the first place. It kept my attention pretty consistently throughout, and the plot moves forward at a moderately consistent pace. It’s a gripping narrative really.
On the other hand, is this a great piece of literature? Of course not. But it does deliver on its promise, which is more than I can say about a lot of books within the same genre. Just go ahead and read the book. I don’t know how else to say it. As a writer, it’s one of those books that makes you hate the author, because you know you’ll never write as well as him. It’s a beautiful, challenging, disturbing, and, oddly enough, uplifting novel. My review, however, is none of these things.