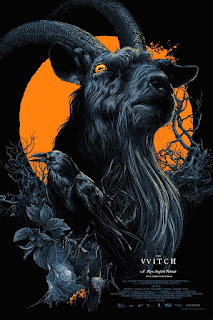 Directed by: Robert Eggers
My Rating: 4 of 5 stars

Hailed by critics since it’s release in 2015, The Witch, tells the story of young girl who is ambivalent to her own power in a male dominated world. And it’s exactly the films exploration of this uncertainty, that is the key to unlocking it’s subtleties. But it’s also the ending, particularly the resolution of Thomasin’s story, that distinguishes it from other, more traditional horror films, as it expertly blends horror with an odd note of self-empowerment.
The Witch follows a Puritan family in their new settlement after patriarch William (Ralph Ineson) breaks ties with their previous colony. What seems like a fresh start instantly collapses however, when the family’s baby, under the ward of the eldest child Thomasin (Anya Taylor-Joy), disappears. As the threat of supernatural malevolence closes in, the fabric of the family is slashed to pieces, and Thomasin is thrown under an accusatory gaze of witchcraft.
Yet, there is a fear of women’s bodies which play’s heavily in most horror films and in particular this one. At sixteen, Thomasin is just beginning to blossom into a young woman, and it does not go unnoticed by her family. In particular by her younger brother Caleb (Harvey Scrimshaw), who is somewhat frightened of his older sister now because of how she draws his gaze. Her mother (Kate Dickie) recognizes this as well and talks her husband into trying to find a family for Thomasin to serve so that she will no longer trouble the family.
As a young woman in 17th century New England, Thomasin is someone who is entirely stripped of any agency. She exists solely to serve her family and eventually be married off to bear more children. Thus, as The Witch progresses, it becomes clear that the campaign being waged against her family, far from being malevolent, is one that is targeted directly at liberating her.
However, the idea that she is being liberated is also an intentionally confused one. After-all once she submits to Satan near the end of the film, he takes the form of a man. But, nevertheless, there is still a bemused sense that she has somehow triumphed over circumstance and as a result the film does come to have a rather “happy” ending once Thomasin records her name in Black Phillip’s book, joining the coven. Which, also, consequently, becomes the first actual choice that she has been allowed to make.
Judging from the many interpretations of the film, it appears as if The Witch is destined to enter into that great canon of horror movies, stories which terrify us by tapping into the immense power and fury of isolated women, Carrie comes to mind, and while most viewers will rightfully ask if The Witch, even deserves to be called a horror movie, I’m rather ambivalent about the label myself. It’s ostensibly more of a family drama where the nominal Witch becomes symbolic of the Son's lust, the Mother's wrath, the Father's pride, and Thomasin's resentment. But, I will also say that if dealing with complex interpersonal family issues, set against the backdrop of religious hysteria, isn’t something which causes you unease, which any great horror film worth it’s weight in salt will inevitably create, then I’m guessing nothing will. Also, kudos to you and your perfect family.
Labels: Movie Reviews