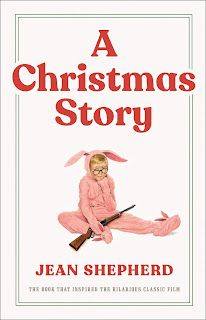 A Christmas Story by Jean Shepherd
My rating: 3 of 5 stars

For many people, Christmas simply isn't Christmas until they are able to sit back and comfortably enjoy a marathon viewing of “A Christmas Story” shown almost exclusively on TBS every year.
And honestly it’s the same for me. I have been a big fan of the movie for as long as I can remember, and, like other fans of the movie, I can quote, verbatim, almost every iconic line: "You'll shoot your eye out, kid." "Oh, fuuuddgge!" "He looks like a deranged Easter Bunny!" "I triple-DOG dare ya!"
And yet, in spite of this, and for whatever reason, I had never picked up the book. Even though every year it seemed to always appear on a shelf somewhere in front of me, as we did our Christmas shopping, and every year I dismissed it and moved on. That is until this year, when I discovered it again at a local “five and dime” and thought what the hell.
The book, much like the movie, is the quintessential look at American life in the Depression-era, Upper Midwestern town, of Hohman, Indiana, which was a stand-in for Shepherds own home town of Hammond, Indiana. And is an entertaining and fun look back at a childhood I never lived, but can easily, and vividly, imagine thanks to Shepherd.
You might be surprised to learn however, that Shepherd never actually wrote a book called “A Christmas Story.” The movie itself is actually based on a number of selected stories from Shepherd's body of work over the years, with one story here and another there, borrowed and adjusted to fit into the narrative of the screenplay as a single entity. And the one thing this book does perfectly, is to gather some of those original stories together under a single cover, saving one the effort of having to search them all out.
It was actually author Shel Silverstein who first encouraged Shepherd to begin to write down some of his stories. But, Shepherd, who performed primarily for radio in the decades after World War II, was reluctant to do so at first, as he was not a writer. Eventually, Silverstein ended up recording some of Shepherd's stories on tape, transcribed them, and then together with Shepherd, edited and developed them for publication. Some of which first appeared in Playboy magazine.
Nevertheless, creating stories centered around nostalgia is a tricky thing as the memories that create it are unique to each of us. The themes, however, are similar and that's where Shepherds success lies. And as I look back now, through the twinkling lights of so many Christmases, I find myself reflecting on some of my own holiday memories, or what my brother and I might even refer to as “tradition.”
Back before the internet invaded our lives, back before satellite/cable TV, the primary means of entertainment, in our house at least, during the Christmas season, was the stereo in our mothers kitchen.
And as soon as we made it home from school, on the afternoon which heralded our winter break, my brother and I would jam one of our mothers old eight track cassette tapes containing popular Christmas melodies into her little stereo, fast forward to Bing Crosby’s holiday classic, Christmas Dinner Country Style, and then dance around the house, full force, like wild savages. It was actually more likely running than dancing, but we didn’t know the difference.
The song itself speaks of a time when Christmas was still Christmas. And, for me, nothing embodies Christmas more than a country style dinner at your grandmothers house on Christmas Eve. Even now, as an adult, I still listen to the song, together with my son, as we decorate our house for the Christmas season. Much to the chagrin of my wife, who I should add, is forced to listen to that “fucking song”, her words, on repeat, as I instruct our son in the hollowed arts of “tradition” making.
Another one of our fine holiday “traditions,” pertains to every kids version of a Holy Book: the Sears Christmas Wish Book, the arrival of which was nearly as magical as Christmas itself. It provided an excuse, an invitation, rather, to dream. And with the fervor of our fictional ancestor Ralphie Parker, my brother and I would pour over the catalog debating, ad nauseam, which items were Santa list worthy and which were merely stupid. At the height of its popularity, the catalog could easily top 600 pages, with over 250 pages of toys, so this debate was never taken lightly.
But, whatever “traditions” we may or may not have had, most have now been adapted completely, as people have passed on while still others have moved away. We still make the effort to be together, it’s just that now our “traditions” are much the same as any other family; we eat, we give gifts and attempt to be merry. Thus, in a very poignant way, Shepherd’s stories articulate a world that no longer quite exists, if in fact it ever did.
Even so, after having read Shepherds compendium, I can now confidently say, without any fear of contradiction, that this ended up being one of those very rare occasions in which the movie was far better than the book.
Labels: Book Reviews