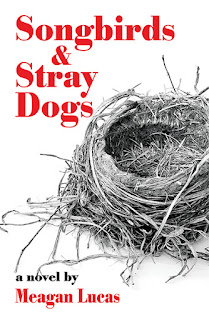 Songbirds & Stray Dogs by Meagan Lucas
My rating: 4 of 5 stars

One of the hardest things for a writer to perfect is dialogue. Which is probably one of the many reasons that I feel such a repugnance at having to read something written in dialect. It’s rarely, if ever, used correctly, let alone effectively, and as a result, pricks the ear like a badly tuned musical instrument. But, whenever I do happen to come across a good piece of dialogue, it begins to takes on the form of a great song. It becomes music. And the dialogue presented here, has managed to sing itself into my imagination and become a small but powerful opera in the unexpected form of a novel.
In Songbirds & Stray Dogs, Jolene has been abandoned by her crank whore of a mother on the steps of her aunt’s front porch at eight years old. And has spent the last thirteen years of her life living in the shadow of the pain her mother caused her, all the while trying, and failing, to prove herself worthy of her aunt’s costive love. But, it’s only after she inadvertently finds herself pregnant, and with the father of the child refusing her, that her aunt throws her out of the house. With nowhere to go and no one to turn to, Jolene heads to the mountains of North Carolina, in a desperate attempt to outrun the shame that is her life.
But, geography and a sense of place are both just as central to story as is dialogue. And in almost everything I’ve read about this book the importance of setting has been stressed. Some might say for good reason, as this book encompasses a very Southern story, born of sweet-tea and Jesus, cornbread and shot guns. A story that could have easily become mired in pointless despair but, through the authors own discriminating talents, manages to guard against this, which is quite impressive for a debut novelist.
The books genuine tenacity, however, lies with Jolene herself, who embodies a fierce, still center. She makes no boasts, issues no threats, and depends on a dogged faith that people will do the right thing if given the chance, even when no one we meet throughout the course of the novel really seems to deserve her faith in them. The only unanswered question, is how Jolene could have grown up in this world and still become such a strong, self-reliant and proud individual. Hell, how do any of us?
And although, while Jolene may be heroic, she will likely never be looked at as anything more than ‘white trash’ by those outside her small community, who will never experience anything close to what she has had to endure. And this is the real tragedy of the story. It’s heartbreaking. That even though she has overcome so much, people will never be able to get past the poverty into which she was born.
Nevertheless, it’s been said that a writers name becomes alive on the lips of their readers. Which effectively sums up my own experience with the book. It is both simple and sharp and Lucas paints a very sad story with a beautiful brush. Her writing cascades like rain, drifts in dreams and carries you on the tides with decadent descriptions as it ebbs and flows across the page. The world she has created pulses between innocence, triumph and annihilation; it recognizes however, that while there is great suffering and cruelty and ignorance in the world, that we still manage to walk among miracles.
And yet, primarily it is a novel in which the lives of the young are scarred forever by the weaknesses of their elders. Because ours is a world that is quite simply incapable of offering us any peace, we can only find it in our hearts. Which, admittedly, is both stupid and sentimental. But, honestly, if true, and by the same token at least, the world can’t take it away from us once we find it either.