Book Review: Democracy at Work: A Cure for Capitalism 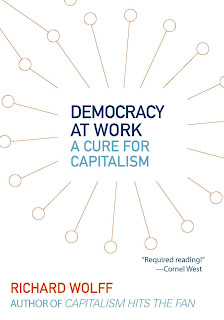 Democracy at Work: A Cure for Capitalism by Richard D. Wolff
My rating: 3 of 5 stars

Capitalism shapes almost every aspect of our lives, yet a vast majority of people have no idea what it even is, how it got started, or how it’s basic mechanisms, i.e, private property, capitol, and labor, relate to us. We are generally only given platitudes as to how it operates, such as freedom or liberty. However, if we truly understood it, we would tear it apart in minutes.
Americans love to announce they live in a democracy. But their workplaces are, in fact, small tyrannies. And unfortunately our current public discourse doesn’t give us very many helpful ways to talk about the dictatorial rule of our employers. Instead, we talk as if workers aren’t ruled by their bosses. We are told that unregulated markets make us free, and that the only threat to our liberty is the state. We are told that in the market, all transactions are voluntary. We are told that since workers freely enter and exit the labor contract, they are perfectly free under it. We prize our skepticism about “government,” without extending our critique to workplace dictatorships. We are told that our choice is between free markets and state control, but most adults live their working lives under a third thing entirely: private government.
One key cause for this intolerable state of affairs is the lack of genuine democracy in our economy as well as in our politics. The solution of which requires the institution of genuine economic democracy, starting with workers directing their own workplaces, as the basis for a genuine political democracy.
In Democracy at Work, Richard Wolff lays out a hopeful and concrete vision of how to make this possible, addressing the many people who have concluded that economic inequality and politics as usual can no longer be tolerated and are looking for a concrete program of action.
Wolff focuses the readers attention on one of Marx’s key discoveries about capitalism, namely surplus value, which is what employers appropriate above what they pay for wages. Wolff shows that productive workers are not compensated for the full amount and worth of their labour. And this constitutes exploitation. The expropriators constitute a tiny percentage of the population, and they control what happens with that surplus value. It is this relationship of production, Wolff insists, that has thwarted the democratic promises of the American, French, and other proletarian revolutions. And that this system of minority rule over ownership of assets and people’s labour power is also the cause of the staggering inequality that afflicts the world today.
His solution is to replace the capitalist economic system with what he refers to as Worker Self-Directed Enterprises (WSDEs) a system in which the workers not only own the means of production, but also own the related structural functions of the enterprise. This is Marxism at it’s purest.
The problem with Marxism, however, much like every other progressive idea, is not that it has been tried and found wanting, but that it has been found hard and so never tried. And I’m extremely thankful that someone has finally put something together articulating ideas that go beyond this “market capitalism vs. state socialism” false dichotomy that we’ve been brought up to believe. There are other viable alternatives.
This idea that the majority of working people have become wage slaves and spend most of the best hours of the day (and give the best part of their lives) working for companies in which they have no stock in, or say in how they are run, is unacceptable.
We must acknowledge, as I believe many people do, that there is no future of capitalism without exploitation. There never has been, there never will be. It’s not so much that it can’t be reformed, it’s that its basis is to exploit. Therefore, it is past time we considered remedies for reining in the private government of the workplace similar to those we have long insisted should apply to the state. As Wolff righty argues, a true state democracy cannot be sustained without total democracy in the workplace. And a true democracy in the workplace will not be realized if the appropriators of surplus are not identical to the producers.
In these times of unprecedented inequality, it appears as if a new historical vista is decisively opening up before us. Making the relevance of Marx’s ideas ever more prescient as wage-labour, i.e. slavery, continues to extend its menacing hand into all corners of the earth.