Book Review: Winners Take All: The Elite Charade of Changing the World 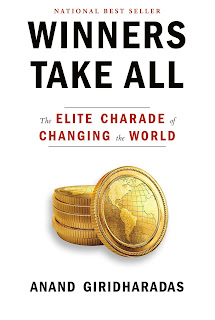 Winners Take All: The Elite Charade of Changing the World by Anand Giridharadas
My rating: 3 of 5 stars

I want to get a few things out of the way before I begin this review: (1) A villain who despairs of his villainy does not suddenly become a hero. (2) Generosity isn’t a substitute for justice. (3) Charity, is far too often a way of maintaining hierarchy, rather than a way of undermining it. And finally, (4) Capitalism makes charity necessary because Capitalism makes economic justice impossible.
Now, I am sure that there are some who may not believe, let alone agree, with all or even, most of these things, but, here’s something else they probably won’t believe or agree with either. The very act of charity also creates the pressure to be grateful. “When help is moved into the private sphere, no matter how efficient we are told it is, the context of the helping is a relationship of inequality: the giver and the taker, the helper and the helped, the donor and the recipient.”
More than a century ago, Oscar Wilde outlined the same danger posed by those trying hard to improve society. “Just as the worst slave-owners were those who were kind to their slaves, and so prevented the horror of the system being realized by those who suffered from it, and understood by those who contemplated it,” Wilde wrote, “so, in the present state of things in England, the people who do the most harm are the people who try to do the most good.”
In Winners Take All: The Elite Charade of Changing the World, Anand Giridharadas lays waste to this ever growing, and pernicious, perception that the rich and the elite are solving society’s greatest problems. And in doing so, has also managed to craft a compelling investigation into our current day class systems.
Giridharadas argues that the equivalent of today’s slaveholders are the elite citizens of the world, who are philanthropic more often than not, but in ways that ultimately serve only to protect and further their interests and cement the status quo. “For when elites assume leadership of social change, they are able to reshape what social change is — above all, to present it as something that should never threaten winners.”
Of the billionaires profiled in the book, all prefer markets to governments, policies to politics, and love solutions that are win-win, which is just another way of saying that they themselves should never lose. Theirs is a conservatism camouflaged in radical adjectives; change you can’t believe in.
What is truly obscene however, is that all of their philanthropic efforts, are bankrolled by the rest of us, through lower wages and lower taxes on wealth. Simply put, we pay the billionaires to tell us what to do. What gives their demands such amplification isn’t just their money, vital though that is, it is that they and their friends in government have dismantled many of our countervailing institutions, whether organized labour or local government. The author doesn’t call it by name it, but what he’s really describing is an institutional crisis in which the political landscape has been cleared of its forces for representation and reformation. Instead, power has been put in the hands of a group that believes trade unions are merely cartels, intellectuals are far inferior to “thought leaders” and hell is other people voting. And if we are to move towards a better society, the philanthropy of the super-wealthy must be scrutinized, as all too often, what appears to be a generous “gift” is actually a calculated action intended to increase their power, image or influence. As former British Prime Minister Clement Attlee said, “Charity is a cold grey loveless thing. If a rich man wants to help the poor, he should pay his taxes gladly, not dole out money at a whim.” Historian Rutger Bregman, echoed the same sentiments when he, now famously, said, “Taxes, taxes, taxes … all the rest is bullshit.”
Ours is now a world which labors in the gleam and sparkle of a new gilded age, where the rich and powerful fight for equality and justice any way they can, except in ways that threaten the social order and their position atop it. And it is indeed strange to me, that the people with the most to lose from social reform are so often the ones we place on the board of it.
This is quite possibly one of the most important books I’ll read this year. As it throws into stark relief, the elite idea that philanthropy is somehow better than paying taxes. Or even, and especially, paying their employees better wages. And I strongly suggest that everyone read and digest it, if for no other reason than to prepare for, what I hope, is, finally, the coming tsunami of societal revolt.