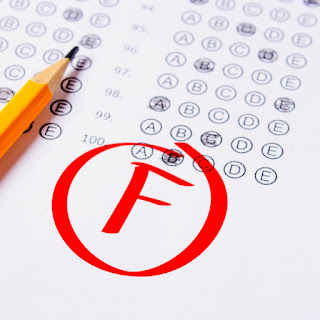 According to economics professor Richard Wolff, the practice of grading is one that has only served to prop up America’s capitalist economic system and its “major failures,” including "socially divisive inequalities” and the creation of “boring, dangerous, and/or mind-numbing” jobs. He asserts that capitalism’s survival can be attributed only to flawed human ideologies, one of which is the concept of “meritocracy.” Grades, he claims, are one of the many “mechanisms” used to “anchor” the concept of meritocracy in society.
And he’s right. The ridiculous merit system we all prostrate before, organizes how individual employees interpret the unemployment they suffer, the job they hate, the wage or salary they find so insufficient, the creativity their job stifles, etc. And it starts as schools train individuals to accept the grades assigned to them as measures of individual academic merit. Which prepares them to accept their jobs and incomes as, likewise, measures of their individual productive merit. Under this framework, unequal grades, jobs and income can all be seen as appropriate and fair: Rewards are after all, supposedly proportional to one’s individual talents.
Thus, it would appear that today’s schools have become nothing more than central institutions of a modern capitalist society that has not substantially changed over the last 200 years. Mostly because it emerged out of the development of capitalism and was constructed to serve the needs of the capitalist class in a new industrial era. It was the industrial revolution which initially drove the need for a basic level of expertise in the working population. Administrative growth, particularly in the 20th century, was also a major factor behind the push for universal reading and writing standards. Capitalism also sought to cultivate a new generation of ruling class managers and controllers of the working population. Wealthy private and exclusive select-entry schools train students from a young age to think of themselves as leaders, deserving of success and better than everyone else. These people are nurtured to study subjects like law and business. Many of them go on to be bosses, judges and politicians who feel that the system works because it worked for them. Making merit ideology also function as a crucial defense mechanism for capitalism’s failures.
This paradigm leaves little room for any systemic criticism. Inadequate educations are not blamed on an inadequate educational system unable or unwilling to fund high-quality mass schooling. Unemployment, bad jobs-and insufficient incomes are not blamed on the capitalist economic system. Had they been so blamed, both systems could well have come under criticism and opposition and died off long ago. Therefore, we cannot think of education as simply neutral, but rather as a contradictory system that is governed by antagonistic forces. On one side are the efforts of the bourgeoisie, the corporations, and their governments to build an education system that serves their interests. And on the other is the glorious history of education workers’ struggles — workers who have, in some cases, given their lives to defend not only their rights as workers but also the rights of working class and poor students to have access to quality public education.
But, the history of education has always been irrevocably linked to the history of class struggle and the ruling class has traditionally always sought to keep a well-rounded cultural education inaccessible to the masses. One of the ways that the Catholic Church maintained so much power in medieval Europe was by limiting access to the Bible. Only the educated clergy and nobility could read Latin, and this gave them free reign to interpret the Bible’s teachings in ways that reinforced the dominance of the feudal aristocracy over the peasant serfs and poor townsfolk. Only the wealthy receive a “quality” education, but the education for the poor and working class is merely training for work. It in no way has the goal of making people “the true owners of their lives.”
Make no mistake, grading is a tool of an oppressive capitalist force. And I, for one, refuse to fight for an educational system like the one in which we are currently accustomed. One in which “Equality” is nothing but a cynical and prejudicial lie. Until equality includes an end to class-based society and exploitation, I know it to be just another empty phrase. We are fighting to bring an end to class society, and in this struggle, we are truly fighting for our very lives.
Labels: Articles