Protect and Serve Who? 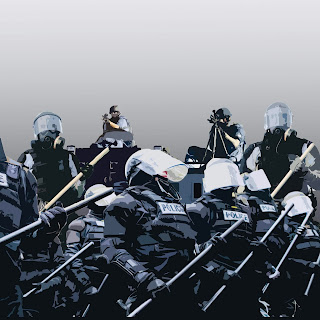 In almost every discussion about police killings of innocent civilians, there is always an underlying assumption that the police are supposed to protect and serve the population. That is, after all, what they were created to do. If only decent relationships between the police and the community could be re-established, this problem would be resolved. But this optimistic way of viewing the problem rests on a misunderstanding of the origins of the police and what they were actually created to do. The police were not created to protect and serve the population. They were not created to stop crime and they were certainly not created to promote justice. They were created to protect the new form of wage labor which emerged under capitalism in the mid-to-late 19th century from the threat posed by that system’s progeny, the working class. In other words, the police were created to be the domestic enforcement arm of capital.
Sam Mitrani, an Associate Professor of History at the College of DuPage, has written that, “Before the 19th century, there were no police forces that we would recognize as such anywhere in the world. In the Northern United States, there was a system of elected constables and sheriffs, much more responsible to the population in a very direct way than the police are today. In the South, the closest thing to a police force was the slave patrols. Then, as Northern cities grew and filled with mostly immigrant wage workers who were physically and socially separated from the ruling class, the wealthy elite who ran the various municipal governments hired hundreds and then thousands of armed men to impose order on the new working class neighborhoods.”
At least since 1855 the Supreme Court has consistently ruled that law enforcement officers do not have a duty to protect any individual, despite their motto of “protect and serve.” Their duty is to enforce the law in general. For example in 2005 the Court ruled, 7–2, in, Town of Castle Rock v. Gonzales, that a town and its police department could not be sued for failing to enforce a restraining order, which led to the murder of a woman's three children by her estranged husband. A more recent example takes us to Florida where a federal judge ruled that the school district and the Broward County Sheriff's Office had no legal duty whatsoever to protect students during the shooting at Marjory Stoneman Douglas High School. U.S. District Judge Beth Bloom dismissed the lawsuit brought by fifteen student survivors of the shooting against six defendants, including the Broward School District, the Broward Sheriff's Office and school resource deputy Scot Peterson as well as campus monitor Andrew Medina, who knew Cruz and saw him arrive on campus, but chose not to confront him.
We are uniformly inundated with the notion about the need for police in our communities, but if the police do not even have a duty to protect our children, then what purpose do they serve and, more importantly, who’s interests do they serve? That answer, will become self-evident once we consider these questions: If your landlord refuses to fix your kitchen sink or if your boss refuses to pay you, do the police jump in to help you out? No. If you do not pay the landlord on time however, will the police show up to evict you? Yes. If you strike with your fellow workers over unfair labor practices will the police show up to escort you off of the property or force you back to work? That answer again is unquestionably yes.
The Police fully represent only the interests of the ruling power and of the ownership classes, almost never the average poor or working class person. The primary function of the police is to simply uphold the status quo, enforce property rights and collect revenue for the state through enforcing largely arbitrary and predatory mandates. Most of their crime fighting efforts amount to responding to violence with more violence, almost no effort is ever spent towards preventative methods and when they do try to prevent crime, their standard tactic is prejudiced profiling based superficially on class.
However, it’s almost always the case that those who enact this repression on behalf of the powerful are working class themselves. Policemen, bailiffs, prison officers, and border control officials are amongst those who perform jobs antithetical to the interests of the working class. The inherent contradiction is in the fact that these people share the plight of the workers whilst simultaneously being the most powerful instruments of established power to maintain that plight.
Nevertheless, I do believe that the majority of people who join the police force do so with the desire to help their communities. But, unfortunately, they are given the wrong tools for achieving this objective, despite their best intentions. What most communities need is affordable housing, stable employment, high-quality health services, i.e. things the police can’t provide. And when the agents we send to deal with the needs of the poor have only guns and handcuffs, should we really be surprised that these interactions, almost by necessity, leads to violence and the criminalization of poverty?
Gary Norton once said, “It is time for the police to rediscover what the words "Protect And Serve" are supposed to mean.” I couldn’t agree more.
Labels: Articles