Book Review: Confessions of an Antinatalist 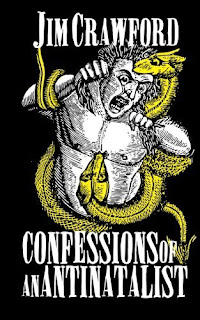 Confessions of an Antinatalist by Jim Crawford
My rating: 4 of 5 stars

“I never asked to be born!” Who hasn’t said, or screamed, this while in the grip of some teenage angst ridden meltdown? I myself still say it regularly, which is to say everyday, sometimes multiple times. But what if we took this grievance as a statement worth examining instead of writing it off as a phase we will most likely grow out of or at least learn to tolerate once we discover that adult pacifier known as alcohol? And what if we follow it through to its logical conclusion—that it's morally wrong to have children?
Welcome to antinatalism my friend, an obscure branch of philosophy that has developed a sort of cult following online. It’s a philosophical position which assigns a negative value to birth and argues that people should abstain from procreating as it is morally reprehensible to do so. Making, Confessions of an Antinatalist, part philosophical treatise, part memoir, a thoughtful deconstruction of our basest urges, i.e., the desire to fuck and propagate.
Crawford’s writing has as sophisticated-yet-folksy, feel to it, kind of like a more morbid version of Jean Shepherd. His prose is simple, lean and unpretentious, whether he’s talking about his health issues or discussing his interpretation of Buddhist philosophy. And while the first half of the book feels somewhat aimless, constantly flipping between heavier discussions of antinatalism with stories from his past, it works quite well in setting up the second half of the book, which is where things get genuinely more interesting. Crawford dedicates the end of the book to his own philosophy of antinatalism, which, sadly I found surprisingly short, followed by a brief exchange with his critics.
The instinctual response to this book, however, or to the idea of antinatalism more generally, is frequently: “Well gee, if life is so bad, why don’t you just stop whining about it and kill yourself?” Such a question serves to highlight the inherent flaw in antinatalist thought: that it’s a rational philosophy aimed at an irrational species. The drive to procreate, to blast that little bit of DNA, while balls deep, inside of some skanks cunt, to create yet another hairless lump of flesh, is one that no logical argument will ever be able to dent.
But, given this grim view of the human condition, it does make sense to raise the question of suicide: Why not put an end to one’s life, in order to escape from this ultimately senseless vale of tears?
The reason, of course, is really pretty simple, as Cioran knew, “It’s not worth the bother of killing yourself, since you always kill yourself too late.”
Schopenhauer likewise rejected the idea of suicide as suicide does not negate, but rather affirms, the will-to-live, for the person who would die by suicide desires life; it’s just that the individual is unsatisfied with the conditions on offer for their particular life. Within this logic, suicide is foolish because it prevents a person from attaining the highest wisdom and the true inner peace that would come from the actual renunciation of the will-to-live. Thus, Schopenhauer writes, suicide is “an act of will” through which “the individual will abolishes the body ... before suffering can break it.” He thereby likens a suicidal person to a sick person who “having started undergoing a painful operation that could cure him completely, does not allow it to be completed and would rather stay sick.” There is only one remarkable exception to his overall view on suicide: death by voluntary starvation. At the highest levels of asceticism, the negation of the will-to-live can attain such a point where “even the will needed to maintain the vegetative functions of the body through nutrition can fall away.”
Now I’m sure, most people, under the influence of powerful biological dispositions towards optimism, will find Crawford’s book intolerable. I’ve observed first-hand how people who come to this subject convinced that the idea is merely silly, quickly become hostile, if not downright vituperative, as the discussion progresses. And such hostile reactions aren’t confined to popular forums either; there’s a scholarly article by Sami Pihlström that argues, inter alia, that antinatalism falls under this weird category of “ethical unthinkabilities” that should be proactively refused entry into the open court of academe. In this regard, my interest in antinatalism overlaps with my interest in other taboo subjects that tend to provoke acrimony, such as the unorthodox exploration of suicide ethics which animates much of Sarah Perry’s work.
Nevertheless, Crawford’s uncommon willingness to speak openly about these ideas, common to all of us, ones which we are usually expected to suppress, is what ultimately makes this book so remarkably compelling. There is always the pressure to offer pockets of hope, redemption, or escape in our narratives, and Confessions is intent on withholding it. And while I’m unlikely to get a vasectomy anytime soon, Crawford’s book has at least made me reconsider my own inner desire to father more children.
Labels: Book Reviews