Book Review: The Not So Subtle Art of Being a Fat Girl: Loving the Skin You're In 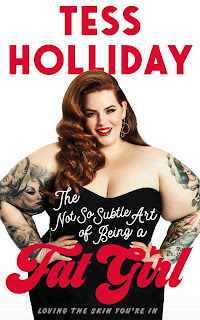 The Not So Subtle Art of Being a Fat Girl: Loving the Skin You're In by Tess Holliday
My rating: 2 of 5 stars

There are just too many rules for the body. Rules which are often unspoken and ever shifting. Making so much of having a body, simply about wanting someone else’s. And it is in this way that Holliday’s experiences come to serve as an implicit indictment, confronting us with four central questions: (1) What does it mean to have a body? (2) What does it mean to have a body that exists in a social space? (3) What does it mean to have a body that is considered unacceptable? And (4) a question which pertains to the female body alone; what does it say about our culture that the desire for weight loss is considered a default feature of womanhood?
The Not So Subtle Art Of Being A Fat Girl, is a deeply personal memoir written by famed model Tess Holliday and released by Blink Publishing. It’s a comprehensive book which reveals, in surprising detail, the life that came before the glamorous selfies, inspirational social media posts and the whirlwind schedule for which she is perhaps best known. Alongside discussions of online abuse, fat-shaming and the realities of being a single mother, Holliday weaves in some endearing anecdotes and bite-size chunks of life advice on everything from relationships and safe sex to style and body modification. She also talks about the pressures of being in the public eye and of her own personal relationship with the word ‘fat’, and how, in an effort to show women that they don’t have to be a specific size to feel good about themselves, kick started her own body positivity campaign under the hashtag #effyourbeautystandards.
However, while I think body positivity is necessary, I also think that it’s at risk of becoming nothing more than a buzzword, a candy-coated movement meant to help us 'feel beautiful' and love ourselves all the time, which I think is rather unfair to ask of someone. Shame masked as pride, or its pursuit, is not what body positivity is, or should be, about. Which is something I think Holliday is aware of, and so tries to ensure that she only works with people who don't use the term in a tokenistic way, but instead uses it to contribute to lasting change in the industry.
Even so, there is still an all too common misconception about body positivity; that it’s only about "letting yourself go," sitting on the couch eating junk food all day, not caring. Which is an enormous, and nonsensical, leap from trying not to hate yourself or making the effort to stop forcing yourself to fit into an impossible cultural standard. The idea that a body is "let go" simply because it's not being weight-suppressed and beaten into submission and creamed and Botoxed and tightened and toned is semantically inaccurate.
For me, body positivity simply means accepting the body you have as well as it’s changes in shape, size, and abilities it may undergo due to nature, age, or your own personal choices throughout your lifetime. It's the understanding that your worth and what's going on with you physically are two very different and separate things — that no matter what's happening inside, outside, or to your body, you're still just as worthwhile as anyone else.
But, to believe that championing body positivity equates to telling people to be unhealthy or to stop taking care of themselves is just blatantly simpleminded. On the one hand, it’s telling people to be okay with themselves and on the other, that other peoples' health is nobody's business but their own. If someone is being unhealthy in a way you deem inappropriate, that’s not your concern; it’s their body, it's called having autonomy.
Yet, for some inflated reason, bodies which are deemed socially unacceptable, are seen as public property ― reach a certain stage of fatness and you will rapidly learn that people feel entitled if not compelled to tell you what you are doing wrong, even if you are total strangers, because being fat evidently means you cannot be trusted with your own body and are in need of outsiders to instruct you on the finer points of having one. We view bodies, in particular fat bodies, as if they were a problem to be solved, as something we could discuss and debate.
Sometimes even I hate my own body, the unruliness of it. The fact that it demands things of me that I don’t want to give it. I hate it’s limitations. I hate it’s lack of discipline. And I hate the way it hungers but never finds satisfaction. I want and want and want but never allow myself to reach for what I truly want, leaving that want raging desperately beneath the surface.
Nevertheless, the ideas we foster about what a body should be, despite the fact that we all inhabit “unruly” bodies, ultimately makes it very easy to destroy people. Primarily because human life enters the public world already destroyed, appearing only as an object among others, leaving us with bodies, which we are both acutely aware of and desperate to transcend.