Book Review: The War of Art: Break Through the Blocks and Win Your Inner Creative Battles 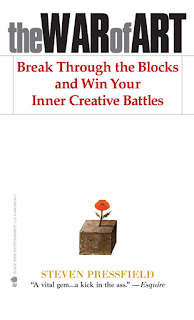 The War of Art: Break Through the Blocks and Win Your Inner Creative Battles by Steven Pressfield
My rating: 3 of 5 stars

We are taught from a young age to follow our dreams, to shoot for the stars. However, an invisible time limit is often set on these grand schemes and once that limit is reached, we are routinely told that it’s now time to “grow-up” even though we’ve been growing up our entire lives. But it’s only after we hit the job market, that we realize what growing up really entails. Because growing up had nothing to do with a specific timeframe nor was it tied to a specific age. Growing up simply meant declaring defeat on what we truly wanted to accomplish. Not all is lost, but now the uphill battle is finding time for your passion, your purpose, while still maintaining an acceptable quality of living.
I actually read this book several months ago, and finished it in one sitting, but put reviewing it on the back-burner. I wasn’t sure if it deserved to be reviewed. Some books are like that. “I am the reviewer who doesn’t review.” And since people keep recommending it to me, I finally decided to write this review, if only to stop the deluge of, although sincere, utterly plebeian requests. But what really kept pulling me back to it however, has more to do with a certain Pressfield quote, than anything else: “It was easier for Hitler to start World War II than it was for him to face a blank square of canvas.”
The War of Art, is a non-fiction novel on the front-lines of defeating the ugly beast called procrastination. It’s split into three parts, each chapter is ultra-short and every sentence counts. Book One defines Resistance. Book Two is all about “turning pro.” Meaning now that you’ve identified Resistance and recognized how it works against you, it’s time to combat it. Book Three takes it a step further, into “the higher realm,” where the muses and divine inspiration live.
For Pressfield, the source of all art comes from somewhere outside ourselves. This idea won’t appeal to everyone. Even the man who wrote the forward said he disagreed with it– he believes that internal talent must exist first before you can become inspired. In any event, there is something to be said for invoking, acknowledging and embracing the ideas that come in dreams, on long walks or perhaps even in the shower. Open and relaxed minds do make more connections and create ideas and stories seemingly out of nowhere.
Yet, if I were to be completely honest, I didn’t like this book very much either. It was just too unintentionally silly for me. Now I know silly books can be meaningful or moving, or even fun, but this one is just hard to recommend. In short, it’s both absolutist and extremist and fails to take into account the psychological nuances of the human brain, the demands and challenges of life outside of art, nor does it take into account a world in which our lives aren’t predetermined by a divine purpose. It’s particularly hard to suggest to anyone who is serious in their pursuit of writing. It’s too weird, dramatic, and fanciful, and the good advice and thinking it does contain is often buried in indulgence. You can find equivalently good inspiration without these flaws. I would suggest the book you read instead be, On Writing by Stephen King. It’s cruel to say this, but it’s also the book Pressfield should have read.
The problem is that Pressfield likes his fantasies. It’s clear he depends on them to work. Which may work for him, but as a model for others? With no offering of alternatives? He ends up losing himself in metaphor and will most likely lose inexperienced writers in them as well. As the book progresses his central arguments shift to mystic forces, with the task of creative work scrambling into literal notions of angels and gods and their pivotal role with writers and their work. If you like books like The Secret and find the Law of Attraction useful in your life, and you want to write, you’ll probably find this book inspiring I suppose, as it bets on similar faith in the universe and forces beyond our control as its central, or at least concluding, theme.
Nevertheless, you don’t have to like the book, or believe everything, or anything, that Pressfield says, to get something out of it. So if you’re curious, if you’re feeling a little nudge toward anything in this review, if you have a dream or an unlived life, then read it. Because, why not? Fight for your art goddamnit. No one else is going to.
Labels: Book Reviews