Short Story Review: The Boogeyman: a selection from Night Shift by Stephen King 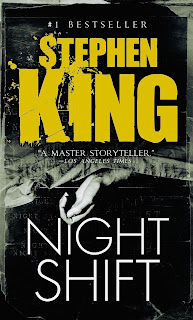 Whenever I’ve been asked over the years what my favorite short story is, my answer is always invariably, and immediately: The Boogeyman by Stephen King. I can think of no other story in recent memory that has had such a disturbing and profound effect on my psyche.
I was first introduced to King’s body of work at the tender age of six by a friends mother who was cool enough not to tell my mother what sort of things I was actually reading. But I was around ten before I found my way to this story and now, more than two decades and a few odd years later, I still will not go to sleep unless every closet door in the house is closed and latched.
King’s story legitimately scared the hell out of me as a kid. I was terrified mostly by the monster itself, slithering out of the closet to claim defenseless children. And now as an adult, a new layer of fear has been added, that of the parent who wakes the baby up in the middle of the night, just to make sure it is still breathing. Hoping that a roll of the dice hasn’t left them to deal with the horrific grief that is the aftermath of SIDS. King is good at that. Layering fear so that each time you read it, you find something else to keep you up long after you turn out the light.
The Boogeyman was originally published, in the March 1973 issue of Cavalier, and later collected in King’s 1978 short story collection, Night Shift, and falls within a timeframe of King’s career where he admits that he was feeling anxiety and even some resentment when balancing his newly found fame and ascent to the Horror God that he is now, with the responsibilities of raising and providing for his young family.
It tells the story of Lester Billings, a beleaguered father, plagued by guilt, who visits a psychiatrist and recounts the murderous tale, of his three, now dead, children. Billings alone knew the truth of what had happened and sought out Dr. Harper in the hopes of finding someone to share his burden; that his cowardice made him complicit in the deaths. And he carefully walks us through his terror and impotence as each of his children share and suffer a terrible fate at the hands of a monster.
One of the more fascinating themes explored in the story is one of imagination versus reality. Lester raises an interesting philosophy about what is real and what we believe is real. That perhaps if we believe in something strongly enough, then that makes it more real. The idea being that the more fear Lester has of the boogeyman, the more he believes in the boogeyman, the more real the boogeyman becomes, and the stronger it gets. It's an interesting concept that is a recurring theme in fiction and King actually recycles the idea in his novel, IT.
But, there’s also guilt, and an underlying message about not being a neglectful parent. From the way Lester describes his wife Rita and how he deals with his children, the reader gets the impression that his family is a burden to him. And it’s possible that his subconscious desire to get rid of his family is what drives him to ignore his children's screams for help. In the story he even implies that his wife Rita did not get pregnant on accident, because "children tie a man down". He then says that sometimes when the kids cried at night he wished he could just throw them and Rita out of a window. These are suspicious things that make the reader consider whether or not Lester himself is the boogeyman.
This is not however, King’s most well written story. Penned in his early years as a writer, it falls prey to all the things that he warns us to avoid in his book On Writing. “LY” verbs abound and some of the plot is unrealistic and dated. And the main character is not one with which you can easily sympathize with. He’s passive/aggressive, bigoted and misogynistic. Let’s face it, he’s ultimately little more than a cowardly jerk. Despite all this, The Boogeyman is still my favorite of King’s stories. But while it’s supposed to be a story about everyone's biggest fear growing up as a child: the dormant monster living in your closet that waits in the middle of the night for the right moment to snatch you from your bed. It’s really a story which illustrates what far too many of us know on an intimate, familial, even empyrean level; that home, is where you have to face the thing in the dark.