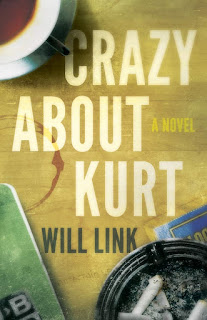 Crazy About Kurt by Will Link
My rating: 3 of 5 stars

The second Dave Grohl hit the snare for the first time, eighties metal was officially dead and grunge, for better or worse, would change the world forever. Making Nirvana the first alternative band to release an album that mattered and Kurt Cobain the only true icon grunge ever produced. He was the one who broke out first, he was the one fans felt the most passion for, he was the one who was the most controversial, and he is the one who died a mysterious death. Which ended up becoming a catchall event for anyone who wanted their adolescence to have meaning, purpose, or depth.
Although I won’t speak for the rest of my peers, grunge was more than just music: it was subterfuge, knowledge, philosophy, empathy, wit, courage, love, desire and anger, and it saddens me that nothing has truly replaced it. Sure, there will always be musicians who are politically aware, socially concerned, or risk-takers; not everyone is Fred Durst after all. But the days when gender constructs became virtually meaningless, when brains and coolness and sex appeal weren't incompatible, when mass popular culture transcended humble origins to become something profound, subversive and greater than itself … those days are gone. And they're in the same place all our ideals end up...the cold dampness of the grave.
Crazy About Kurt is a novel which takes place over one night in the suburbs of Long Island, and is set against the backdrop of Kurt Cobain’s suicide. It follows four friends who struggle with sex and identity as they try to invest their inevitable passage into adulthood with a significance it doesn’t seem to have. The beauty of the book is that it doesn't hide any of this. Unfortunately, it also makes the book hard to categorize in a way. It’s a bit like the winds of solitude roaring at the edges of infinity.
Though not unique in any particular way, it is well written, and Link does a fantastic job of connecting an ensemble of characters, who are trying desperately to fit in, all the while attempting to establish their own dispositions within different social groups and settings. He also manages to weave his story with passion and a little wayward energy, and even finds a literary style that matches the emotional fragmentation found therein.
Yet, no matter what particular group you may have belonged to, everyone inevitably broods the same. Such navel-gazing, quickly became a staple of the grunge era, both musically and socially - existential angst, coupled with self-loathing and irony, became the talking points for an entire generation. Making Crazy About Kurt, read almost like a work of historical fiction; and no sociological treatise could ever duplicate Link’s attempt at capturing exactly how it was to be alive at that cultural instant.
However, the books real pathos derives from the characters bumping off one another; the plot twists, such as they are, hinge on them realizing their surface impressions of each other are wrong. But nothing that happens in the book is all that surprising. The truths that are exchanged are more or less predictable, as they all have fairly standard hang-ups. Despite living in an oasis of privilege, the characters are still, nonetheless, touched by death. And the biggest life lesson here, if there in fact is one, has to do with the fragility of life and how we cannot shield ourselves from death and the meaninglessness which follows from it.
By the end, however, I did feel a sad indifference as the story ultimately failed to form any sort of useful fiction. And as a consequence, Crazy About Kurt, will be a book I think that many readers will find immediately recognizable once it’s begun and absolutely forgettable once it ends. But, even with all its faults, it is a book that still begs to be experienced. Because, ultimately, much like Nirvanas breakout album, Nevermind, it won’t be remembered as ‘great’, and certainly not as a cultural phenomenon, but simply as a representation of what it was like to be young in the nineties.