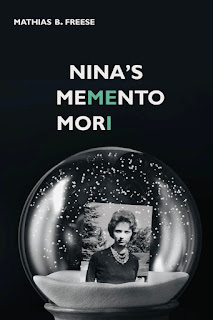 Nina's Memento Mori by Mathias B. Freese
My rating: 3 of 5 stars

When we love someone, who do we love? That person, or our idea of that person? Although other people no doubt exist in independent physical space, our entire relationship with them exists entirely in our minds. When we touch them, it is not the touch we experience, but our consciousness of the touch. We do not even know the other person. What we know is the sum of everything we think we know about them. Even empathy is perhaps of no use; we think it helps us understand how other people feel, but maybe it only tells us how we would feel, if we were them.
Which brings us to, what is perhaps the central problem of philosophy; from the inside we find meaning and knowledge, but from the outside, we find the possibility of neither. And it is here, caught in this peculiarity, between meaning and meaninglessness, that we find Nina’s Memento Mori, a collection of short reflective essays, which are existentialist in nature and psychoanalytic in action, written by author Mathias Freese. Which serves as a superb elegy to the authors late wife and is tasked with the profound responsibility of answering the question: "Who was Nina?"
Nina was undoubtedly a wife, mother, teacher, and lover, but now in a sense, she is also an emblem. An emblem of the security, hope and innocence of childhood, which a man can spend his entire life seeking to regain. She is the green light at the end of Gatsby's pier; the leopard atop Kilimanjaro, seeking nobody knows what; the bone tossed into the air in “2001.” She is that yearning after transience that adults learn to suppress. But while true, this explains nothing. It does however, serve as a remarkably satisfactory demonstration that nothing can be explained. Freese plays with this paradox all throughout the book. And it’s precisely the books construction which demonstrates how our lives, after we are gone, survive only in the memories of others, and how those memories butt up against the walls we erect and the roles we play.
However, this isn’t a book of counted sorrows. On the contrary. Though the material is literally heartrending, the writing is exhilarating and what unfolds resembles an adventure narrative of sorts: a traveler's faithful account of those harsh but fascinating cliffs of grief. Grief, being, as Joan Didion once remarked, one of "the most general of afflictions," yet one that has been written about less than one would expect.
Yet, Freese mourns more over the burden of existence than over its loss. Because life, as it turns out, is a cascade of nows falling on top of one another without meaning or purpose. Of all the philosophers, only Schopenhauer ever got that right.
For Nietzsche, however, no one can ever truly love life unless they are willing to see it for what it really is and still love it. In fact, you have to love life so much that you will it eternally, in all of its sheer beauty and utter horror. Nietzsche called this his most difficult thought. But only a broken heart is capable of great love. Because, grief, as Terry Tempest Williams once said: “...dares us to love once more." Love may in fact be the only rational answer we have to the meaninglessness of existence. The only other thing we have that even comes close is the knowledge that there is still such a thing as the human heart, we just don’t know what makes it beat.