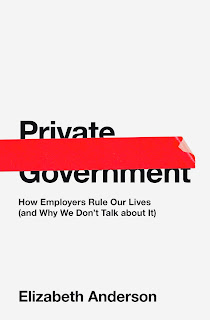 Private Government: How Employers Rule Our Lives by Elizabeth S. Anderson
My rating: 4 of 5 stars

The American workplace is marked more by hierarchy and domination than any other abstract idea concerning freedom and democracy. Managers can, and do, impose, for almost any reason, sanctions including job loss, demotion, pay cuts, worse hours, worse conditions, and harassment. Millions are pressured by their employers to support particular political causes or candidates and subjected to suspicion-less drug screenings. Soon employers will even be empowered to withhold contraception coverage from their employees’ health insurance. They already have the right to penalize workers for failure to exercise and diet, by charging them higher health insurance premiums. Making the top managers of firms, therefore, the heads of little governments, who rule their workers while they are at work — and often times, even when they are at home. Yet despite the presence of this vast realm of domination, contemporary economists and political theorists have largely been silent about the social relations of work. Philosopher Elizabeth Anderson, however, aims to change all of that.
In her book Private Government: How Employers Rule Our Lives (And Why We Don’t Talk About It). Anderson explores a striking American contradiction. On the one hand, we are a freedom-obsessed society, wary of government intrusion into our private lives; on the other, we allow ourselves to be tyrannized by our bosses, who enjoy broad powers of micromanagement and coercion. Anderson believes that many American workers are constrained by rules that would be “unconstitutional for democratic states to impose on citizens who are not convicts or in the military.” And she asks whether this might be a failure of our political system—a betrayal of America’s democratic promise.
Anderson’s critique also invokes the authoritarian communism of the Soviet Union and other countries. And this “dictatorship” interconnection makes sense, since companies are organizations ruled through a hierarchical command structure. Leaders at the top issue orders that flow down to subordinates, with no meaningful democracy for those on the bottom. Moreover, it’s “communist” in that companies successfully employ internal central planning. So the “free market” is, strangely enough, a network of competing, centrally-planned dictatorships.
Even worse, we typically think of workers as empowered free agents who, if they don’t like a job, can simply walk away from it. In surveying the economics literature, Anderson finds that economists often cite workers’ ability to quit as proof that companies have no real power over their employees. “This is like saying that Mussolini was not a dictator, because Italians could emigrate,” she writes. It’s absurd, she argues, to imagine that “wherever individuals are free to exit a relationship, authority cannot exist within it.”
She raises a good point. Because quitting typically imposes great costs on the worker while imposing minimal costs on the boss. Workers are often worse off for quitting than getting fired, since in many cases they wouldn’t qualify for unemployment benefits. Thus “Exit” is a poor way to discipline the tyrant at work. Not to mention that by quitting they would just be moving to another job, laboring under yet another dictator.
Which makes the stakes that Anderson so convincingly elucidates, far too high for us to afford to ignore. Because private government is rule by authorities who tell the governed that the rules to which they are subject to are none of their business, that they aren’t entitled to know about how their government operates, that they have no standing to insist that their interests be taken into account in how they are governed, that their rulers are not accountable to them.
We are so used to rhetoric that casts “government” as a threat to our liberties. But by making it clear that the workplace is a form of government (that the state is not the only government that rules us), we can make clear how the authority that employers have over workers threatens their dignity and autonomy. By naming that government as “private” — that is, as kept private from the workers, as something employers claim is none of the workers’ business — we can make more vivid the fact that workers are laboring under arbitrary, unaccountable dictatorships.
I think most workers, i.e, fellow wage slaves, would agree with Anderson’s arguments. And yet, finding ourselves in agreement, why don’t more people talk about it? Because we don't see it. And we don't see it because of ideology. We don’t want to acknowledge how much the rhetoric of American freedom outruns the constraints of private government. And for many, this defeat is hard to admit. Which is why we still, mistakenly view, the corporate world through an eighteenth-century lens. To large corporations, we lend the liberatory aura that, in Adam Smith’s day, surrounded small businesses. This allows CEO’s to “think of themselves as libertarian individualists,” even though they are more like “dictators of little private governments.”
But it may simply be that the human race is not ready for real freedom. The air of liberty may be too rarefied for us to breathe. The paradox seems to be, as Socrates demonstrated long ago, that the truly free individual is free only to the extent of his own self-mastery. While those who will not govern themselves are condemned to find masters to govern over them.