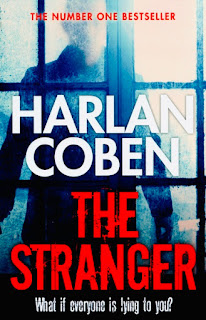 The Stranger by Harlan Coben
My rating: 3 of 5 stars

I have heard Coben say in interviews that, whenever he starts writing, he knows the beginning and the end, but never the path that will inevitably take him from point A to point B, nor does he write an outline. And I believe him. Because this novel feels as though it were written as a homework assignment in a freshman creative writing class.
I had never read this author before, but I should have trusted my instincts once it was recommended to me by someone with questionable taste. On the other hand the back blurb sounded intriguing enough, so I took a chance and borrowed the book from my local public library.
It has a classic thriller setup — a family man living an idyllic suburban life being thrust into a swirling conspiracy that is both chilling and, I suppose, to some, instantly relatable. The premise is an exploration of the deceptively simple “what if” scenario. Which has always been Coben’s strength as a mystery writer, or so his fans have told me; the way he is able to pose a question — a question that throws the protagonist’s life into turmoil — then spend a few hundred pages peeling back the layers as the characters work to find the answer.
It begins as the titular stranger, a mysterious man who informs lawyer, Adam Price, that his wife, Corinne faked a pregnancy and the ensuing miscarriage — the first in a startlingly high number of twists and revelations. After relaying the bad news, the stranger disappears as quickly as he appeared, leaving Adam in a conundrum—does he approach his wife or do nothing?
Don't get too excited by this gripping set-up. Because this so-called thriller is, in point of fact, dreck. The novelist tells you something...then tells you again...then tells you again...and again...and again...and again...and again...and............sorry, I nodded off for a moment.
Remember The Celestine Prophecy? Or The Bridges of Madison County? Both popular books that were kind of silly and shallow. You can now add this one to the list. It reads more like a rough draft of a screenplay than anything else. On several occasions I even found myself wondering if Coben is one of those “best-selling” authors who is now exclusively using freelance ghostwriters to churn out books simply because he doesn't want to write them any more, but is unwilling to give up the cash stream. It just doesn't read like a professional writer had anything to do with it.
Nonetheless, it was at least “entertaining” enough for me to read to the end. And it did have a fast opening that, surprisingly, managed to pull me in, unfortunately it was followed by a silly, laborious plot that gets worse as it drags along. There’s a huge cast of dull, interchangeable characters who appear and disappear without making any lasting impression on the reader or adding any substance to the story whatsoever. The pointlessly convoluted and sloppy plot simply limps along piling new characters and trite twists on without any real impact, and it’s filled with plot holes you could easily drive a mac truck through. There’s also minimal suspense, which is a kind description, and a resolution that is so second-rate that it's laughable. It was just too contrived. It’s almost as if the intrigue of the story line wore thin and Coben found it too difficult to pull all the threads together in an organic way. Maybe the thriller audience has no problem with writing that is driven entirely by plot twists and garden variety tripe; so, I guess, if you’re someone who loves thrillers, then don't take my review too seriously.
But I don’t want to shit on this book too much. Because in all conscience, I believe that Coben is a writer who really wants to have depth, and with this book, he set out to strike at the soft spot of human fears: the secrets no one wants revealed, especially those that pose a threat to family. And I applaud the effort. But the execution fell far too short. Good fiction almost always begins with story and progresses to theme; it almost never begins with theme and progresses to story. I’m sure however, that if you gave this book an enema, it would make one hell of a great short story.