My Reading Life: with Michael Collins 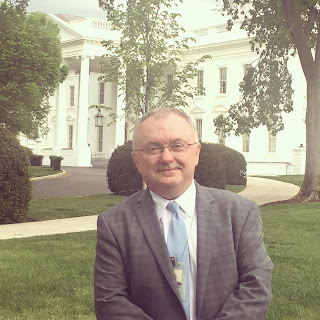 It’s hard to narrow the list to five, but I like a challenge. So five books that I really love (in no particular order) are The Grapes of Wrath, All the Light We Cannot See, Anna Karenina, A Tale of Two Cities and the David McCullough biography of John Adams. The John Adams book is not only a terrific read, it has caused Americans to reassess Adams’ presidency and his legacy. It’s essential reading for history buffs and for anyone else who wants to better understand the American experience.

Hillbilly Elegy. I hated the way it fed into stereotypes of southeastern Kentucky and the way so many Americans outside of Appalachia seem to think it’s a useful guide to understanding the people of that region. It’s not. It’s the story of one author’s family – an author who, by the way, didn’t even grow up in that area.

I also hated The House of the Seven Gables. We had to read it for an English class when I was in high school. I hated every sentence, every paragraph, every page. I hated it so much that I never read another book by Nathaniel Hawthorne. Maybe someday I’ll forgive him and read The Scarlet Letter.

I’m incapable of reading at night. Anytime I pick up a book after 9 p.m., I usually doze off before I get through the second page.

I don’t remember a time when I didn’t like books. When I was really young and hadn’t yet learned to read, I would pick up books and stare at the pictures. Once I learned to read, I read just about anything I could get my hands on. I remember taking the encyclopedia off my parents’ bookshelf and reading about all of these interesting people and exotic places. I guess you’d say I was a nerd.

I just started reading Leo Tolstoy’s War and Peace. It has been sitting on my shelf for years, but I’m just now getting around to it. At 1,386 pages, it’s incredibly intimidating. But I loved Anna Karenina so much that I wanted to read more of Tolstoy’s work. The Brothers Karamazov by Fyodor Dostoevsky is also on my must-read list. So are biographies of Janis Joplin, Woodrow Wilson, the Wright Brothers and the autobiographies of Bruce Springsteen and Elton John.

Lately I’ve been recommending All The Light We Cannot See. It’s a beautifully written, Pulitzer Prize-winning novel about a blind teen-aged French girl and a young German soldier whose paths cross during World War II. I couldn’t put it down, and I want everyone to read it.

The encyclopedias that occupied my parents’ bookshelf when I was a child. They opened my eyes to the world beyond my small town in southeastern Kentucky and made me want to explore these places on my own. I’ve visited 45 states and 26 foreign countries as an adult. My interest in travel sprang from the paragraphs and photos in those books.

Charlotte’s Web. I loved it as a kid, and I love it even today. I never tire of that book. I still have the copy that my parents bought for me when I was a kid. The pages are a little worn, but it’s still in pretty good shape.

I also loved the Hardy Boys mystery series. I checked out every one of those books that I could find at the school library. My parents eventually bought me the entire set. I still have them.

I read book reviews in The Washington Post and The New York Times, but I don’t read literary journals. Not enough time.

As I Lay Dying by William Faulkner is such a strange novel. Its stream-of-consciousness narrative made me rethink the way fiction could be structured.

One that immediately comes to mind is A Son of the Circus by John Irving. Some critics savaged that book. It’s not Irving’s best work, but it’s not the jumbled mess that it’s often made out to be.

Another book that I was forced to read in high school was Great Expectations. I didn’t like it at all and never picked up another Charles Dickens’ book for years. But I eventually grew up. I now put Dickens on my list of favorite writers. Whenever I read one of his works, it takes about 100 pages for me to adjust to his vocabulary, the rhythm of his writing, etc. But it’s always worth the effort. A Tale of Two Cities and David Copperfield are among my favorite books.

It depends on the holiday. I often read a light novel if I’m at the beach. If I’m traveling to a foreign country and have a long flight ahead of me, I usually pack a biography or some other work of non-fiction to read on the plane.

John Irving. He drives a lot of critics crazy with his kooky characters and sweeping plots. But how can you not love The World According to Garp, The Cider House Rules or A Prayer for Owen Meany? Even his lesser-known works such as Last Night in Twisted River or In One Person, are terrific reads.

Nathaniel Hawthorne for reasons listed above.

All the time. I especially remember them reading to me a kid’s storybook about firemen. I used to sit and stare at the illustrations of firemen climbing ladders up the sides of burning buildings, red and orange flames shooting through roofs and out the windows. It made me want to be a fireman. That didn’t happen, obviously.

All The Light We Cannot See, for reasons mentioned earlier.

Jay Gatsby of The Great Gatsby. Because he always threw a heck of a party.

Usually at Kramerbooks & Afterwords Cafe, a wonderful little bookstore in Washington’s Dupont Circle neighborhood. Stop by there if you’re ever in DC. You’ll love it.

Books can introduce us to interesting people, take us to faraway places and open our minds to new ideals. They can remind us of our common history and help us better understand each other. They can inform, enlighten, entertain and even infuriate us. They can open our eyes to the injustices of the world and prod us to demand change. The world would be a boring place without them.


Michael Collins is a White House correspondent for USA Today. He is a native of Whitesburg, Ky. He lives in Washington, DC. Follow him on Twitter
Interviews