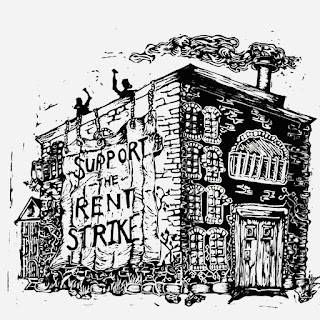 I’ve never liked landlords but I didn’t start hating them until I moved into an apartment complex owned by a property management company. I was shocked when I was hit with various fines (like a $50 fee when rent was only a day late), and then cheated out of my security deposit. Now I know the score. So I want to raise two questions specifically about rent and in particular, about landlords.
Do we even need landlords? Is it necessary to have a system of housing where we pay rent to some owner? The answer to both questions is “no.” And we don’t have to turn to science fiction for alternative models. In the 20th century, many countries had socialist revolutions, and all made great headway in abolishing exploitative housing arrangements.
Take the Soviet Union for example, the first socialist state. The revolutionaries faced extreme difficulties from the start. Housing was in short supply prior to the revolution. Immediately after the revolutionaries came to power in 1917, the Soviets were invaded by the capitalist powers, including the U.S. Basic housing construction was the main difficulty, and much of the progress was wiped out during WWII. The Soviets lost over a quarter of all dwelling places during the Nazi invasion. Nevertheless, they defeated the Nazis, set about rebuilding, and were able to ensure that no person was homeless. Most urban housing was communally owned or owned by the state, ensuring that everyone had equal access.
After the 1959 Cuban Revolution, many tenants were made home owners. Most others lived in state-owned housing, and by the mid-60s, were no longer paying rent. To this day, in the “poor” socialist countries of Cuba and North Korea, homelessness is unknown, whereas in the U.S., hundreds of thousands are homeless. The many socialist revolutions of the past century show that when workers take control of society, we can simply get rid of landlords and all the other exploiters. Under socialism, we can abolish rent. We can end homelessness.
There’s no denying that a housing crisis exists, in America specifically. But the problem isn’t a housing shortage. The problem is displacement and speculation. The rich make money gambling on the housing market, investing their enormous wealth (which is produced by our labor) in real estate speculation. They get rich, banks get bailed out, and the working people end up on the streets. Homelessness in other words, isn’t about a lack of homes and it isn’t about not having enough money to house people either. It’s about the landlord class having a visible weaponized threat to intimidate their tenants with: “This is what happens if you don’t pay us rent.”
I would also like to point out that landlords do not "provide" housing either. I don’t know why this isn’t more obvious than it is. Construction workers provide housing. Landlords, in fact, do the opposite of providing housing. They take the houses that were built for people to live in, hold them hostage for rent, and evict anyone who can't pay. And if landlords can’t afford their own property without tenants paying them, then it’s the tenants providing them housing not the other way around.
Imagine how affordable homes would be if it was illegal to rent them. Remember, value is determined by how much someone is willing to sell something for compared to how much a consumer is willing to pay for it. Someone with a lot of capital is willing to pay more for a home if they can turn it into a continuous profit generator thanks to renting it out. This gives landlords the advantage in the buying market and drives the prices up for everyone else. If renting out homes wasn't legal then landlords would have no incentive to buy homes they're not going to live in. Lower demand leads to lower prices. Rent-seeking doesn’t add any national value. It is coerced trade and benefits only one side.
A landlords only function in a capitalist society is to coerce people to work. And real estate, in particular rent, has always been the most powerful vacuum of money from the poor to the wealthy. Rent being nothing more than a tax levied against the poor, by the ownership class, in order for them to have permission to live, and exist, in society.
And most, if not all, of the people I talk to hate landlords just as much as I do, they are just resigned to the fact that they exist, and have immense social and economic power. But it still nevertheless, troubles me when I hear someone say: "Without my landlord I can’t afford a house, therefore this must mean this economic exchange is a universal truth and in no way has any alternative!"
But landlords are important to the housing market only in the way Nazis were important to Nazi Germany; their function was defined by the context in which they existed. Nazi Germany was not the whole status quo of human history, and your landlord wont be either. The existence of the relationship does not serve as justification for its existence.
However, as long as housing is treated as a commodity to be bought and sold by the highest bidder, housing costs will increase and we’ll remain at the mercy of landlords, who, under gentrification, will get to decide who is allowed to stay and who will be pushed out of their homes. Housing should be a human right. And it will serve landlords well to remember the lessons from the French, Bolshevik, and Chinese Revolutions, that the first class of people to be put to death, were in fact, landlords.
Labels: Articles