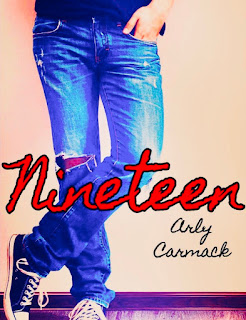 Nineteen by Arly Carmack
My rating: 4 of 5 stars

From the very opening sentence, it’s clear that Cameron Metzger is going to be one of those square pegs that is forever trying to fit into the round hole of life. Yet, according to Heidegger one should never ask why they’re square, but rather, who made the hole round without telling them.
Nineteen, is a book that lays bare the raw talent of debut novelist Arly Carmack, a writer who has the sort of intuitive competence which forces the reader to close the last crisp page of a book and come out the other side as a different person, whether they wanted to or not.
This isn’t, however, your typical boy-meets-girl-falls-in-love-then-separates, kind of bullshit. It’s also not about whether the boy will get the girl. It’s about whether the boy deserves to get the girl, and when was the last time you read a book that even knew that that was a question that could even be asked? The world is not made just so two people who are in love can get married.
Instead this is a story of true friendship, the effects of love, the longing for survival, and the void that exists in every relationship. It showcases what young love and growing up really looks like in a brutal and honest light. How the characters communicate, their associations with each other, their pasts and their futures, along with their pleasures, shines through remarkably well. Although the most fitting thing I can say about this novel is that it doesn’t feel like it’s a debut novel.
It progresses slowly at times and uses some fairly standard characters. But, there’s also a depressing sort of nihilism that permeates the book, which for me, Mr. Melancholy, I always find curiously refreshing. Most of us go through life thinking we’re doing something important, but we often aren’t, causing us to look back with a whole hell of a lot of regret. Which in fact highlights two of the books major themes: that while there is always someone to check on you, there is often no one there to help and that we always seem to be the cruelest to the ones we love.
There’s no real need, or desire on my part, to go into plot points here, as there are perfectly adequate book descriptions available on other sites that have already made those points. Yet, there is a need to underscore, once more, the amazing ability of Carmack to understand precarious things from a young males perspective. How she did this I have no idea. But I do think that she sees things that most male authors wouldn’t have been able to, which will compel nearly all of her male readers into a revisionist stance of their own past and present.
Nevertheless, Nineteen, is not going to be a book that will cause you to weep buckets, like most people I assume did at the end of The Fault in Our Stars, but you will get attached to these characters, just as they are attached to each other.
I’m a fan Ms. Carmack, and I’ll be on the lookout for whatever you write next.
Labels: Book Reviews