Book Review: No Exit: A Play 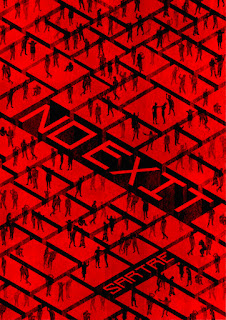 No Exit by Jean-Paul Sartre
My rating: 5 of 5 stars

The idea of being trapped in a room with two strangers and no toothbrushes is not an especially appealing premise. But if this condition is made eternal, then it suddenly becomes sheer torture.
This is the setting of existentialist philosopher Jean-Paul Sartre’s most famous play, No Exit (Huis Clos), first performed in May 1944. The play features three characters, Garcin, Inèz, and Estelle: whom, after their deaths, are escorted by a mysterious Valet to the same room in Hell and locked inside. While they had expected all sorts of instruments of suffering, they are taken aback when they find themselves in a drawing room adorned in Second Empire elegance. This style recalls a sense of order, of tastefulness, of bourgeois decorum that contrasts with the characters’ sinful crimes.
At first, none of them wants to confess the reason for their damnation, nor do they understand why there seems to be a lack of physical pain. Slowly, however, they eventually come to realize that they are actually supposed to be each other’s agents of torment.
After some argument, they decide to confess their crimes, just so they know what to expect from each other. Garcin cheated on and mistreated his wife, and was executed by firing squad for desertion; Inèz is a manipulative and misandrist sadist who seduced her cousin's wife, Florence, while living with them - which drove the cousin to kill himself, and resulted in Florence asphyxiating herself and Inèz by flooding the room with gas while they slept, out of guilt. While Estelle had an affair and then killed the resulting child, prompting the child's father to commit suicide. Despite their revelations, they continue to perturb one another.
Garcin finally begins giving in to the lascivious Estelle's escalating attempts to seduce him, which drives Inèz hysterical. Garcin is constantly interrupted by his own guilt, however, and begs Estelle to tell him he is not a coward for attempting to flee his country during wartime. While she complies, Inèz mockingly tells him that Estelle is just feigning attraction to him so that she can be with a man - any man. This causes Garcin to abruptly attempt an escape. After trying to open the door repeatedly, it inexplicably and abruptly opens, but he is unable to bring himself to leave, and the others remain as well. He says that he will not be saved until he can convince Inèz that he is not a coward. She refuses, saying that he is obviously a coward, and promises to make him miserable forever. Estelle tries to persevere in her seduction of Garcin, but he says that he cannot make love while Inèz is watching. Estelle, infuriated, picks up a paper knife and repeatedly stabs Inèz. Inèz chides Estelle, saying that they are all already dead, and even furiously stabs herself to prove that point. As Estelle begins to laugh hysterically at the idea of them being dead and trapped together forever, the others join in a prolonged fit of laughter before Garcin finally concludes, "Eh bien, continuons..." ("Well then, let's get on with it...").
Yet, it’s the play’s most famous line, “Hell is other people” (“L’Enfer, c’est les autres”), uttered once Garcin realizes that there will never be any escape from being looked upon by Inez and Estelle, that thoroughly captures Sartre’s existentialism: it encapsulates the idea that we constantly feel scrutinized by others, and that the perception other people have of us is crucial in shaping the way we think about ourselves. Making, No Exit, in effect, a play about the "devouring" gaze of the Other and how it restricts our freedom.
Sartre had a tremendous abhorrence for the gaze of others. Because it is through the gaze of others that we are reminded that our validation and identity derives from this gaze. Sartre claims that people relate to themselves and to one another through either looking or being looked at. And that when we perceive ourselves being perceived we come to objectify ourselves in the same way we are being objectified. Thus, the gaze of the other robs us of our inherent freedom and causes us to deprive ourselves of our existence as a being-for-itself and instead learn to falsely self-identify as a being-in-itself. Therefore, under the gaze of the Other, our identities withdraw into the shell of reduction. We no more exist by ourselves, but our lives become entangled in the labyrinthine network of other people’s existence.
But, perhaps the “gaze”can best be understood in psychological terms: "to gaze implies more than to look at – it signifies a psychological relationship of power, in which the gazer is superior to the object of the gaze." The mere possible presence of another person causes one to look at oneself as an object and see one's world as it appears to the other. This is not done from a specific location outside oneself, but is non-positional. This is a recognition of the subjectivity in others. In fact, our perception within the field of the Other is therefore, always and forever, a battle with the Gaze, which casts its powerful net over one’s individuality, freedom and judgment, and fixes and defines them on its whim.
Sartre’s observation: “Hell is other people”, not only becomes then an amusing cocktail party quip, but also stands as a direct confirmation of the power that other people have over us. Other people literally become Hell, a state where torture is not meted out by devils but self-inflicted and inescapable.
Labels: Book Reviews Play Reviews