Book Review: Sympathy for the Devil: Four Decades of Friendship with Gore Vidal 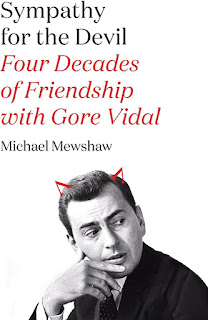 Sympathy for the Devil: Four Decades of Friendship with Gore Vidal by Michael Mewshaw
My rating: 3 of 5 stars

I know I’ve said before that I don’t want an editor or reader, to waste my time with praise, but, of course, I really do. Once, during a writing workshop I attended, one of my fellow classmates had a story go through a brutal round of critiques from the rest of the class. Afterwards he skulked out of the room. Outside he told me that he had expected the class to throw roses at his feet. He was a decent writer, but when he said that, I thought he was the most arrogant son of a bitch alive. In retrospect, however, I see now that I am exactly like him. Actually, I haven’t met a writer yet who isn’t. I guess it just takes a certain amount of narcissism to do what we do.
According to George Orwell there are four great motives for writing, and putting aside the need to earn a living, they exist in varying degrees in every writer, and in any one writer the proportions will vary from time to time, according to the atmosphere in which he is living. One being sheer egoism: The desire to seem clever, to be talked about, to be remembered after death, to get your own back on the grown-ups who snubbed you in childhood, etc., etc. It is none sense to pretend this is not a motive, and a strong one. Writers share this characteristic with scientists, artists, politicians, lawyers, soldiers, successful businessmen — in short, with the whole top crust of humanity. The great mass of human beings are not acutely selfish. After the age of about thirty they almost abandon the sense of being individuals at all — and live chiefly for others, or are simply smothered under drudgery. But there is also the minority of gifted, willful people who are determined to live their own lives to the end, and writers belong in this class. Serious writers, I should say, are on the whole more vain and self-centered than journalists, though less interested in money. If you are at all familiar with Gore Vidal, you know that there is quite a bit of truth in this. Once when asked how he would like to be remembered he quipped: “I suppose as the person who wrote the best sentences in his time.” However, Vidal’s place in the literary firmament has begun to fade, now almost to the point of lettered obscurity. A withering process which began sometime during the embittered years before his death in 2012, but in his prime he managed to achieve a level of fame that few writers enjoy today.
“For more than sixty years he remained a bestselling writer, an influential social and political commentator, and an intellectual force whose work had an impact even on those who never read him,” Michael Mewshaw writes in his alluring memoir, Sympathy for the Devil: Four Decades of Friendship with Gore Vidal.
Famous since his early twenties, Vidal was born into the American Establishment but in countless ways he was estranged from it. For Mewshaw the seeds of Vidal’s eventual undoing were a childhood that was privileged but dysfunctional. “All the building blocks lay close at hand — childhood rejection bordering on outright cruelty, rampant alcoholism, parental promiscuity.” And a homosexuality that he embraced, avidly, by some measures, but never really fully accepted emotionally.
The book serves as a counterbalance to Vidal's own airbrushed self-portrait in Palimpsest, which, “wasn’t so much a memoir as a novel with a thoroughly unreliable narrator.” And provides a candid peek inside Vidal’s domestic life, as well as his fears, vulnerabilities and full-time dependence on his 50-plus–year partner, Howard Austen, whose death in 2003 left Vidal with little more than alcohol for consolation.
Consequently, and as it is with most “hagiographies”, the question of why this book was written raises itself. Mewshaw cops the same plea as many other chroniclers of a now defunct (and famous) pal: The famous dead friend has been misunderstood and he, the memoirist, must set the record straight. Near the end of the book Mewshaw writes that he prefers to remember how “generous and hospitable” Vidal was. “Not at all the bitchy, mean-spirited man his critics imagined.” It’s an odd conclusion to a book that, if anything, makes the opposite case. Mewshaw knew Vidal quite well, as a friend, interview subject, dinner companion and part-time expat neighbor in Italy, but the relationship clearly tested his patience. As he writes, “[Vidal] embodied Goethe’s dictum that ‘the world only goes forward because of those who oppose it.’ And those who oppose it have to expect to take their lumps.”
Moreover, while this book is no doubt well written, and the writer has obvious talent, I didn’t enjoy reading it. The book is primarily filler, extends somewhat stale gossip, and rather too little sympathy. In no way is this book a must-read, a minor-read, or even a useful one. Concepts that are familiar to the average gay man, elude Mewshaw, and as a result, sullies the final portrait. Worse, it gives the book a moralistic tone that is just a touch homophobic. It is also too self-congratulatory, “look at how important I am because of my friend,” and his use of language is a reflection of that. Vidal is dead, who are you trying to impress?
And yet, in spite of all this, and despite its brevity, Sympathy for the Devil, might still be the perfect Vidal biography because it reveals a figure that is still more human, more flawed, more interesting, and more real than the caricature that the public came to accept as the bona fide Gore. A writer, icy or otherwise, couldn’t ask more from a friend.
Labels: Book Reviews