Book Review: HATE INC. - Why Today's Media Makes Us Despise One Another 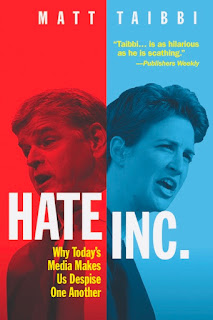 HATE INC. - Why Today's Media Makes Us Despise One Another by Matt Taibbi
My rating: 3 of 5 stars

The media has always had a nice story it likes to tell about itself and its past, when everything was in “richer colors” and “life was more profitable.” This rosy-hued summary is better known by its scientific name, shameless lies. And in his latest book Hate Inc. Matt Taibbi is irreverent enough to dispute this narrative, and call it for what it rightfully is: self-flattering bullshit.
Administering a strident updating of Noam Chomsky and Ed Herman’s classic dissection of capitalist news, Taibbi manages to invert the old media dictum of Chomsky, whom he interviews at length towards the end of the book, and whose basic thesis advanced that management of public opinion in capitalist democracies rarely takes the form of overt propaganda or censorship, but is instead achieved through vigorous policing of what constitutes acceptable opinion such that, as Taibbi puts it, “the range of argument has been artificially narrowed long before you get to hear it.”
This is what people largely misunderstand about the now hackneyed "fake news" issue. News media rarely, if ever, fibs outright. Most "lies" are errors of omission or emphasis. Most of what is "fake" is in the caricature: of their own audiences, and especially of despised groups.
To complicate matters further, news organizations have now not only accepted these limited capitalist brackets of debate, but have actively cultivated audiences completely loyal to only one side of it. News is now like sports coverage: audiences have their teams, the Democrats and Republicans, and it’s the job of news organizations to cheer for one side or the other. Making MSNBC and Fox News, two phony-tough bar belligerents who yell and scream taunts from a safe distance, while their "friends" hold them back to make sure no one actually has to win or lose. In this metaphor, viewers become the "friends" at the bar who must hold their hosts back.
Which means, of course, that the consumers of “news”, on both sides, end up behaving like cultists, self-isolating intellectually, and kept that way with a steady diet of terrifying stories about fellow citizens. Red-staters are told liberals are terror-sympathizers, desperate, out of white guilt, to eviscerate American culture from within. Blue-staters are peppered daily with stories of fellow travelers and traitors in their midst, an incredible example being NBC's effort to paint presidential candidate Tulsi Gabbard as a tool of the Kremlin on the day she announced her run. (Actually a particular highlight in the book is the chapter on Russiagate, which forensically deconstructs the hyper-politicized stylization of information that gave us the Trump era’s equivalent of Iraq’s nonexistent WMD’s.)
Likewise, people need to start understanding the news not as "the news," but as an individualized consumer experience. It’s like the parable of Kafka’s gatekeeper, guarding a door to the truth that was built just for you---anger just for you. And while you listen in annoyance to your favorite political program, you come to resemble a person who thinks they are shaking their fist at power, when in fact you’ve been neutralized as an independent threat, reduced to a prop in a show. The debate you're watching is choreographed. They’ve manufactured fake dissent, in order to prevent real dissent.
Without question, this is what was being parodied in the movie Network, in which an anchorman who loses his mind and begins telling the truth on air is swallowed up and turned into the biggest hit show in the country. The film is a parable of how TV can commoditize and ritualize anything, from profane truth to madness. Mass media makes the act of watching more important than the words. It can take rage and defiance, and in a snap turn it into obedience and submission.
Still, those unfamiliar with Taibbi’s past work in media criticism, may get a misleading impression of the book’s content from both its title and cover. Subtitled: Why Today’s Media Makes Us Despise One Another, and featuring ominous profile shots of both Rachel Maddow and Sean Hannity, Hate Inc. at a casual glance looks like it might be yet another generic screed leveled against partisanship or lamenting the descent of the once-proud enterprise of journalism into adversarial virulence. Instead, what we get is a brilliant analysis and takedown of the current state of our news media. Unfortunately, I believe it will all be for nought as nobody reads books anymore.
Labels: Book Reviews