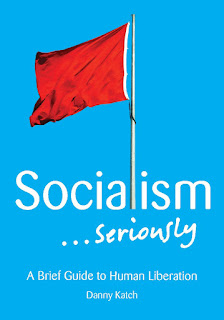 Socialism . . . Seriously: A Brief Guide to Human Liberation by Danny Katch
My rating: 4 of 5 stars

Socialism has never once, in its history as an idea, been “proven wrong.” Instead, every attempt to institute socialism has been met with a brutal and bloody repression by capitalists. Which does not prove that socialism is wrong, it merely proves that capitalism is violent.
I’ll also point out that nobody learns about socialism from a book. We're all born socialists and then become indoctrinated into capitalism. Don't believe me? Go ask a 7 year old if we should give homeless people houses, hungry people food, and sick people medicine. Reading about theory, from a book, later in life, just helps us to unlearn the bullshit.
Enter: Socialism...Seriously: A Brief Guide to Human Liberation by Danny Katch. A small, yet, concise primer on why a society based on progress and equality has always been attractive to those tired of being exploited and undervalued.
As Katch explains in the book, socialism is worth exploring for two key reasons: firstly, most people agree that a system which prioritizes meeting all people’s needs, from food and shelter to culture (i.e. socialism) is more sensible than a system which requires extreme exploitation of resources, high levels of threatened and actual violence, and under which the people who do the work are paid as little as possible while a small minority of owners gain greatly (i.e. capitalism). Secondly, because socialism is clearly still seen by many as a threat, as it is so often used by right-wing politicians as a smear against their slightly-less-right-wing opponents.
There isn’t however, any hard and fast definitions of socialism it just depends on who you’re speaking to. With someone who already agrees with it, I find myself talking about it as a way for people to relate to each other (basically just sharing and pooling resources together instead of being greedy) but if I'm talking to someone who's afraid of it, I find it helps to say: "this is not a big overhaul of government, it's simply the next natural stage in our mode of production, like capitalism was resisted during the days of feudalism even though it's just a fairer version of feudalism, socialism is resisted today even though it's just a fairer version of capitalism.” You could of course argue successfully that socialism is not just a "fairer version of capitalism" but it helps to frame it this way when you're talking to people who think it's just another form of totalitarianism.
However, if you are one of these ridiculous people who looks at the world and says, “Yes, there are enough homes for people, yes there is enough food for people, but if we give it away for free they won’t have earned it and the economy will collapse.” Then you have chosen money (a constructed medium of exchange) over living beings who only want to continue living in peace and safety. And I have no qualms telling you, that is the wrong choice, and that you have been brainwashed by a destructive, exploitative economic system. I point this out, not to be smug, but to make you see what you refuse to see; the America you have always lived in is a fairytale, a facade. You need to stop trying to rebuild the past, which has led us here, and start trying to build something new. Something better.
Because if someone is physically strangling you, you're likely to fight back with everything you have. But when it's a system that's strangling you, people don't respond in the same way. They see that some people are strangled more than others, and so instead focus on how not to be among the ones that are the most strangled. But this is the wrong view. Considering the question before us is: who gets to own what no one has any choice but to use? It is an ancient question that has become, once again, central in our time.
Take the Netflix movie, The Platform: it’s clear that the prison and the platform are a metaphor for capitalism. If only the prisoners would agree to work together and ration their resources—like, say, in a democratic socialist society—everyone would be fed. Instead, it’s a winner-takes-all capitalist society that leaves the people on the bottom dying and eating each other. And while the main protagonist (Goreng) does eventually succeed in convincing the people at the bottom that change is possible, it’s much harder to convince the people at the top to care. The ending leaves it open-ended as to whether or not his message will be enough to convince the people at the top to change their ways. Goreng did all he could. It’s all in the prisoners hands now. But it’s also now in ours as well.
Labels: Book Reviews