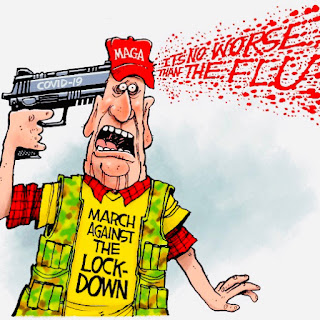 Here we are, once again, being subjected to images of extreme-right wing militia dudes kitted up with AR-15s and Sig Sauers, ill-fitting tactical vests, wraparound sunglasses, goatees, and Hawaiian “Boogaloo” shirts. Usually they’re rallying for the Second Amendment, or the Confederate flag, or white power, or protesting against the latest thing that they feel is impinging on their right to be idiotic, and vowing to defend themselves from the next King George. Or Abraham Lincoln. But, now they’re protesting for their right to go back to work. Or rather, for their right to force other people to go back to work.
These bastards love to scream “freedom” and will do so at every opportunity, as if recreating their favorite scene from Braveheart, but freedom for whom? Workers do not have a choice. Either they are going to be forced back to work or stay home, losing their jobs along with their unemployment benefits, because they refused, i.e. are scared, to return to work. That’s not freedom you ignorant swine. And only in America would “freedom” ever be equated with going back to work. Which illustrates one of the greatest tricks capitalist propaganda has ever pulled; convincing people that "freedom" means something like working for an employer at near starvation wages, as opposed to not having the material conditions of life allow for the pursuit of your own creative potential.
It also doesn’t seem to matter to these shit heels that Americans overwhelmingly favor COVID-19 shutdowns. Nor does it seem to matter that the protests aren’t representative of the workers who’d actually be risking their lives to placate them.
The vast majority of those who want to reopen the economy are business owners. People who are middle to upper middle class. This is in stark contrast to the victims of Covid-19 (who are disproportionately lower class), as well as those who have lost their jobs as a result of the pandemic (who are also disproportionately lower class), as well as those who have been or will be forced to work — or work more — as a result of reopening (the service workers and laborers who are once again, you guessed it, disproportionately lower class).
Which means, that the above mentioned, “reopen” protesters, are merely a privileged, loud and ignorant vocal minority, astroturfed by major conservative benefactors and encouraged by Fox News—much like the Tea Party movement in 2009, which ran roughshod over the Republican Party and became its dominant ideology. In fact, reopen protests are even more cynical than the Tea Party, openly prioritizing the economy over human life. But the choice America faces isn’t “either/or.” The country has more than enough economic power and resources to keep the country shuttered indefinitely, pay workers’ salaries, provide universal healthcare, and fund adequate COVID-19 testing.
But what I find particularly striking about their demands, in the context of a deadly pandemic, is their demand to be free of mutual obligation, which in essence, is their demand to be free to die and threaten those around them with illness and death. Most Americans have rejected this freedom of the grave. But among the ones who haven’t are the people leading our government, which means that this “freedom” remains a powerful — and dangerous — force to be reckoned with.
However, their anger is obviously misdirected. Instead of targeting the media organizations that are trying to keep people informed, or the politicians that are trying to keep the death tolls of their constituents down, they should instead be directing their ire toward the segments of our society that have eroded anything even remotely resembling a robust social safety net over the last 40 years, making us unimaginably vulnerable in a crisis like this while simultaneously funneling all the country's wealth upward to the nation's richest.
In summary: If you need a further example of how housebroken Americans are right now, look no further than the people who are protesting in several states, objecting to what they call “tyranny,” and holding up Revolution-era “Don’t Tread On Me” Gadsden flags to symbolize their resistance to government rule. (They are not ironically, objecting to President Donald Trump’s April 13th declaration that, as president, his “authority is total” over the nation.) They’re also not demanding rent freezes, or UBI, or healthcare. Instead, they’re demanding the right to go out and die to keep making the ruling class richer. To which I say: Godspeed bootlickers.
Labels: Understanding bullshit