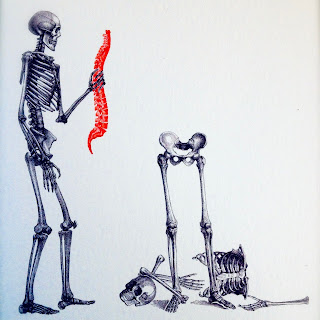 Chiropractic “care”, I’m sorry to say, (actually I’m not sorry at all to say) is little more than the buffoonery of a 19th-century lunatic who derived most of his medical theories from séances.
Imagine, if you will, someone, in 2020, claiming that they could fix someone’s hearing simply by cracking their back. That person would either be laughed out of the medical community or more likely get their own reality TV show airing weekday afternoons. (Pretty sure this is how Dr. Oz got his start).
As the legend goes, chiropractic medicine was born on September 18, 1895, when Daniel David Palmer, a magnetic healer in Davenport, Iowa, met a deaf janitor named Harvey Lillard. Palmer claimed they had a conversation about how Lillard’s hearing could be repaired by adjusting his spine, and with a crack of the back, the janitor’s auditory woes were cured. This was the launching point for the pseudoscience known as, chiropractic medicine. From there, Palmer continued to work on his theories, eventually opening up chiropractic schools that still exist to this day (yearly tuition at the Palmer College of Chiropractic in Iowa: roughly $40,000. Acceptance rate: 100 percent), and the field of chiropractic medicine emerged and hasn’t evolved much since.
Palmer mistakenly believed that misalignments of the spine, which he called “subluxations”, caused a vast range of health problems, even infectious diseases. And over a century later, chiropractic colleges continue to preach this nonsense; here is what the Palmer College of Chiropractic has to say:

“Improper function of the spine due to slight misalignments—called subluxations—can cause poor health or function, even in areas far removed from the spine and spinal cord itself.”

However, subluxations have never once been shown to cause disease. Subluxation is indeed a medical term, but it’s one purposely misused by chiropractors. A subluxation simply means that a joint in your body pops partially out of the socket and, generally, pops back in. But as you might have guessed, and this is going to be obvious once I say it: “Cracking” of the spine doesn’t really mean much. Spinal manipulation usually produces a “popping” or “cracking” sound similar to what occurs when you crack your knuckles. Both are due to a phenomenon called cavitation, which occurs when there is a sudden decrease in joint pressure brought on by the manipulation. That allows dissolved gasses in the joint fluid to be released into the joint itself. Chiropractors sometimes state that the noise means that something therapeutic has taken place. However, the noise has no health-related significance and does not indicate that anything has been realigned. It simply means that gas was allowed to escape under less pressure than normal. Knuckles do not “go back into place” when you crack them, and neither do spinal bones.
Chiropractic beliefs are actually extremely dangerous and far removed from mainstream medicine, as the vocation’s practices have been linked to strokes, herniated discs, even death. Some practitioners have even been known to seriously downplay genetics or germ theory as reasons why you might get sick. And why wouldn’t they? Pesky facts don’t factor into their bottom line. (Never let a good con be undermined with facts, am I right?) While still others have recommended spinal readjustments for newborn infants, saying that this does everything from alleviating “birthing trauma” to stimulating the immune system to the point where the little ones don’t even need to be vaccinated. (Here’s a fun experiment: if you ever go to a chiropractor: ask them what the proper back-cracking procedure is to immunize oneself to zika or malaria).
I’m sure none of this information will deter the 'true believers', (nothing ever does). But if you take into consideration how many times people visit a chiropractor and how many daily manipulations are performed in this country, it does become a public health concern. Maybe it’s low risk, but still potentially a life-threatening one.
Enter: Wade S. Smith, M.D., director of the Neuro-vascular Service at the University of California at San Francisco, and lead author of a 2003 study in the journal Neurology which confirmed a connection between cervical manipulation and stroke. In the study, Dr. Smith says, patients with strokes caused by torn arteries were nearly five times more likely to have had a recent neck adjustment than those with strokes caused by something else, indicating that "recently seeing a chiropractor is an independent risk factor for stroke." (I mean, seriously, the story goes on to talk about people who got so fucked up from having their necks torqued around that they now have to eat their food through a feeding tube).
As for chiropractors being allowed to enjoy the titular benefits of being called “doctor,” that practice dates back to 1922, when the state passed the Chiropractic Initiative Act which laid the groundwork for regulation of the industry and has remained largely unchanged for nearly a century. (Even the best regulation of nonsense, still results in nonsense.)
It explicitly allows chiropractors to call themselves doctors, as long as they don’t claim to be medical doctors. This apparently was very important to early chiropractic practitioners, whose beliefs were, to put it politely, somewhat at odds with established medicine.
Thus, if you ever find yourself wondering: “So when should I go to a chiropractor?” You need to understand that that’s a bit like asking if you should go to a tarot reader as a complement to your psychiatrist. Simply put: There is scant scientific evidence that a chiropractor is your best treatment option for....well, anything. What science will tell you, if your back is ailing, get a massage and go to a physical therapist. Unlike a chiropractor, a physical therapist will address the underlying soft tissue issues that cause pain.
Remember: Chiropractors are not real doctors. (They’re barely real people) They do not have MDs. They are not required to even have so much as a bachelors degree. Yes, conventional medicine sometimes fails us, but Chiropractors exploit these failures just so they can peddle their own brand of pseudoscience, extolling the virtues of an “alkaline diet”, telling you how to manage stress with detoxing, and waxing scientific about the adrenal gland. (Last time I checked, this has nothing to do with the goddamn spine).
But hey, I get it, you’re going to occasionally hear some dipshit claim that a chiropractor helped him de-clutter his alcove or do 87 sun salutations (or something equally as stupid)…but that’s an anecdote, and data is more important, and trustworthy than anecdotes. The data on chiropractic medicine supports that the practice is nothing more than a collection of broken promises and fake medicine. (Dr. Oz is that you again?)
Labels: Understanding bullshit