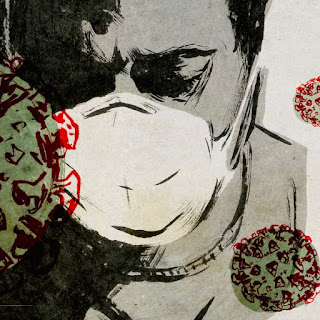 Why do people trust some experts but reject others? Why do so many people distrust medical experts with regards to medical issues, or even climate experts for climate issues, or economic experts for economic issues?
How is it that people now not only doubt expert advice, but believe themselves to be as smart, or even smarter, than experienced professionals? Parents who refuse to vaccinate a child, for example, aren't really questioning their doctors. They're replacing their doctors. They have decided that attending the university of Google, is the same as going to medical school.
Increasingly, in this country especially, laypeople simply don't care about expert views anymore. Instead, many Americans have become insufferable know-it-alls, locked in constant conflict with each other, while knowing almost nothing about the subject they are debating.
There's a lot of blame to go around for all of this. For instance, smartphones and the tablets we carry around all day, cause us to falsely believe we can answer literally any question at any moment. Coupled with a corporate media landscape, that, while trying to tell people what they need to know, must also compete for ears, eyes, and clicks, and so are also forced to ask their target audience what it is they would like to know. But even if we manage to mitigate all of this, we're still all too likely to get our news, and views, from social media, where a silly meme from your aunt Rose in Cincinnati, competes for your attention with actual information.
At this point, the novel coronavirus pandemic has killed tens of thousands of people and utterly reshaped the global economy. Perhaps unsurprisingly then, it has also given rise to numerous conspiracy theories — about the origins of the virus and whom it infects, and even about the virus itself. There are people who believe, for example, that cellular data networks may be spreading the virus (a theory that, as Reason magazine’s Eric Boehm put it, “doesn’t even make sense,” as radio waves do not spread viruses). No shit.
However, conspiracy theories that are generally disseminated by the silly aunt Rose types of the world, don’t hinge on a right/left axis. People are drawn to conspiracy theories not for political purposes, but for emotional needs, like the need for knowledge, the need for safety and security, and the need to feel like the groups we belong to are offering ourselves and our community a positive good.
But what differs with coronavirus conspiracies is how political elites are responding to the virus — often, by encouraging new conspiracy theories that downplay the severity of the pandemic. Imagine if Ronald Reagan had come out in the ’80s and said that AIDS was sent here by Moscow, or didn’t really kill people. That would have been really, really bad because our political leaders can, and do, influence a lot of people and that winds up taking the message far beyond just the conspiracy-minded people to those who trust that individual political leader.
There’s even recently been a “documentary” making rounds on social media titled: “Plandemic” which is hands down, the stupidest shit I’ve seen yet, dealing with the virus. It’s a movie which attempts to spread misinformation and a narrative about the virus, calling it a ploy for the government to take control of our lives. Are you fucking kidding me?
This twenty-five minute vignette features anti-vaccine “Truther” Judy Mikovits, whom like many quacks is quickly cashing in on misinformation about covid-19. She’s portrayed as some sort of brave maverick scientist and truth teller, when she’s really just a disgraced charlatan. And while she may have lost the support of the scientific community, it appears as if she has found a new home in the pseudoscientific conspiracy community.
One of Mikovits’ claims in the movie, is that the reason Italy was hit so hard is because the virus for the flu vaccine it used was grown in dog cells and dog cells have a lot of coronavirus. She also cites the bogus claim that the flu vaccine increases your chance of getting COVID-19 by 36%. Spoiler alert: It doesn’t. She even mentions Hydroxychloroquine, because of course she does.
Mikki Willis, the filmmaker behind this shit show, tried to preemptively court controversy in an earlier Facebook post, writing:

“Dear gatekeepers of truth and free speech, before removing this video, please read these words: The world is watching you...” (Facebook has not removed the video).

It’s a pretty weak conspiracy video honestly. No flashes to secret redacted government documents. No real whistleblowers. Clear target on Fauci as if he is some all powerful super villain. Many vague unproven claims....yawn. It’s total idiocy. If there is in fact a nugget of wisdom to be mined from the “documentary” it’s this: stay in school kids or you’ll end up saying stupid shit like Dennis Prager or Rush Limbaugh on a weekly basis in front of a camera.
There’s also a video circulating around featuring Drs. Dan Erickson and Artin Massihi, who own five urgent care centers in California, who called a press conference to release their conclusions about the results of 5,213 COVID-19 tests they had conducted at their centers and testing site. In the video they claimed their results showed that the virus had spread further in the area, undetected, and thus wasn’t all that dangerous. But public health experts were quick to debunk the doctors’ findings as misguided and riddled with statistical errors — and an example of the kind of misleading information they are forced to waste precious time disputing. The most important piece of information, the thing everyone should have paid more attention to, the thing that actually tells us all we need to know about them, is this: “own five urgent care centers”, they were simply struggling business owners trying to drum up business.
We need to find our way back from this ego-driven wilderness. Historically, people return to valuing expert views in times of trouble or distress. But this isn’t what we are seeing right now. We are all too willing to argue with our doctors until our fever is out of control and puss pores out of our eye sockets. Let's hope it doesn't come to that. But that's where we're headed. And unless we start accepting the limitations of our own knowledge, then each of us is failing in our obligation to participate in our democracy as involved, but informed, citizens. But as a wise man once said, it's easier to fool people than to convince them that they have been fooled.
Labels: Understanding bullshit