Art Review: The Sin (The Story of a Salacious Painting) 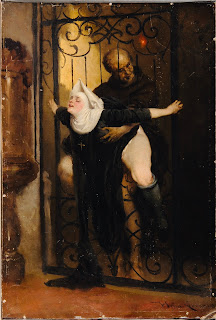 Heinrich Lossow was a noted German genre illustrator, as well as painter, who enlivened editions of Shakespeare, as well as other novels, and at one point was even the curator of the Schleissheim gallery near Munich. First training under his father, he would later go on to study under Karl Theodor von Piloty, before then traveling through France and Italy perfecting his craft along the way. Yet, Lossow was also a prolific pornographer in his spare time. Which brings us to what is perhaps his most well known painting: The Sin.
Causing a scandal in it’s day, the painting depicts a nun and monk engaged in carnal activity at what is perhaps the most well known orgy to ever take place at the Vatican, The Banquet of Chestnuts, the account of which was carefully preserved in the Latin diary of the Protonotarius the Apostle and the ceremonies of Master Johann Burchard. 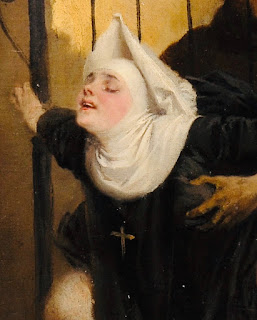 According to the chronicler, a banquet was given at Cesare’s apartments in the Palazzo Apostolico. Fifty prostitutes, or courtesans, were present to entertain the guests of the banquet. As Burchard describes in his diary, The Holy Prepuce:
“On the evening of the last day, Sunday October 30th 1501, Cardinal Cesare Borgia, son of Pope Alexander VI, hosted a banquet in the Papal Palace where fifty prostitutes were in attendance for the entertainment of the guests. All of whom danced in the afternoon with servants and other people present, first in their clothes and then naked.
Following the supper, lamp-stands holding lighted candles were placed on the floor and chestnuts strewn about, which the prostitutes, naked and on their hands and knees, had to pick up with their mouths as they crawled in and out among the lamp-stands. The burning flames illuminated the wide eyes and delighted grins of the watching guests as the women crawled around on all fours, before finally picking up the chestnuts with their nether regions, sometimes two at a time. The Pope watched and admired their noble parts. It wasn’t long before the dinner guests got involved, throwing down barrettes, brooches, and even gloves for the dancers to pick up.”
Those with more ambition then decided to burn off dinner by getting down and dirty with their choice of courtesan, quickly turning the feast into a scene that would have made Caligula blush.
“Prizes were then offered—by the Pope himself—silken doublets, pairs of shoes, hats and other garments—for those men (including cardinals and priests) who were most successful, (i.e., had the most ejaculations), with the prostitutes. Tunics of silk and other fineries were handed out to the winners. Servants kept score of each man’s orgasms, for the Pope greatly admired virility; and measured a man’s machismo by his ejaculative capacity.”
It would appear that at an hour when the Pope should have been at prayer, he was busy pouring himself a fresh glass of Montepulciano d’Abruzzo and enjoying the show with his two of his favorite children, Cesare and Lucrezia Borgia. 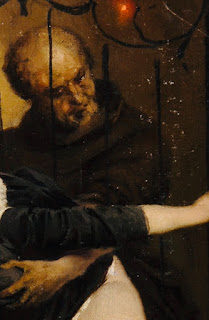 However, many modern scholars have cast doubt on the veracity of this story. Its internal implausibility is well noted, as is the fact that it is mentioned only in Burchard’s memoirs.
Nevertheless, the truth of the night in question, perhaps, lies somewhere in the middle and is subject to the moral threshold of the society examining it. While Burchard’s account of the Banquet of Chestnuts may have been toned down by 19th and 20th-century translators who found the whole event too shocking to detail, the fête in question is an excellent example of history’s malleable nature and its ability to reflect the condition of the those telling the story.
But titillating as it may be, the Banquet of Chestnuts in not a story easily dismissed by history. Pope Alexander VI is widely regarded as one of the most controversial religious figures of the Renaissance period, while his surname Borgia has become synonymous with scandal, nepotism, and incest. And for those who suspect Pope Alexander VI was actually guilty of such licentiousness and duplicity, the vision of his death may seem apropos.
When he died in 1503 at the age of 72, his body lay in state for many days. The August heat quickly took its toll on the remains, and according to an Italian theologian, “It was a revolting scene to look at that deformed, blackened corpse, prodigiously swelled, and exhaling an infectious smell; his lips and nose were covered with brown drivel, his mouth was opened very widely… therefore no fanatic or devotee dared to kiss his feet or hands, as custom would have required.” People often say we die as we lived, which in this case would suggest the Pope was more than a little rotten on the inside. Either way, it’s well known that he was one of the most sexually active religious figures in all of European history and had a dubious record as a moral man. It is also well known that one evening in late October, he threw one hell of a party. Conceivably, the sexiest party in all of history.
Labels: Art reviews