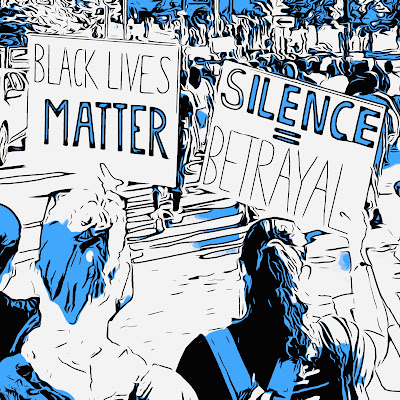 We are all having "hard conversations" about racism and police brutality right now, or at least I hope most of us are, and I’m sure that you’ve noticed many detractors, to put it politely, often using the same intolerant "talking points.” So I decided to compile a list of some of the more noxious ones and offer a sort of guide to help you successfully rebut a few of them on your own, if you ever happen to come across them, which, let’s face it, you’re absolutely going to.
“Black people commit more crime”
If you have a higher number of police in black neighborhoods than in white neighborhoods, especially within a corrupt system with arrest quotas, then of course black crimes will be far more documented than white crimes.
“More white people are killed by cops than black people”
There are 6x more white people in American than black people, so yes, by sheer numbers they get killed more by police. However, black people are shot by cops at a rate 4x higher than white people. (Bonus points: ask them why they don’t think that cops killing people, of any race, is a problem).
“All Lives Matter!”
All lives cannot matter until black lives matter, too. (Don’t attempt to explain this any further, protect your sanity)
“White people have been oppressed too!”
Yeah, mostly by other white people. And even if they were oppressed, it was due to reasons that had nothing to do with their skin color (anyone remember the holocaust?)
“How come (insert race here) doesn’t riot or protest or loot?”
Couple things: 1. You’re perpetuating a model minority myth, so stop doing that, 2. They probably do it’s just not well reported, and 3. You’d be against that too, so what’s your point?
“What about black on black crime?”
You do know that black people don’t kill each other because they’re black right? (Also this is only ever brought up to distract people from police brutality).
“Blue Lives Matter!”
This isn’t a real thing. You can stop being a cop, you can’t stop being black. Getting hurt, shot, or killed while on the clock is an occupational hazard, which cops sign up for. Black people didn’t.
“Many of those killed had prior criminal histories”
Doesn’t matter, it’s rarely ever relevant in the moment, especially if someone is handcuffed, tased, and subdued. Their prior criminal past isn’t going to magically attack you. (Note: Many of the cops doing the killing now, have prior on the job murders on their record).
“White people are killed by cops too”
No cop has ever killed a white person just because they were white. It’s also assured that they won’t be brutalized like black people are while in custody. Here’s a question for you: How come mass shooters, who are generally almost always white, are taken in safely but unarmed black men and women are almost always shot dead?
“Why can’t they just peacefully protest or protest in a way that doesn’t disturb anyone?”
I don’t know, could be because they are shot at, tear gassed, and arrested. Ever heard of Colin Kaepernick? Fired. MLK? Assassinated. Also, the point of protesting is to create sustained disruptions to the status quo, forcing people in power to create change.
“Not all cops kill or brutalize people”
Sure. Here’s the problem though: if they ever chose to, they wouldn’t face any consequences for it because of the broken policing system.
“How can that cop be racist? They’re (insert race here)”
You don’t think that working in a broken system built on systematic racism will impart racial biases onto an employee of said system? If they weren’t racist before they almost certainly will be after putting on that badge.
“Well, I don’t see color.”
You may mean well by saying this, but what you’re actually doing is invalidating the experiences of anyone who isn’t white. You can’t discuss and change problems if you refuse to acknowledge they exist in the first place, nor can you support those whose skin color and cultures differ from your own. We are all human and should strive to be kind, yes. But in a society filled with overt racism and injustice, we are not all equal, and we must listen to each other’s experiences. We also can’t forget to value the things that make us unique or celebrate the beauty in diversity, especially when those differences are often used to perpetuate oppression. You truly need to “see color,” hear people’s different stories, and honor them by working against racism.
A huge part of being an adult is not just taking responsibility for yourself, but actively working to dismantle racism when you see it — in other words, talking to the people in your life who still make ignorant comments in response to the news or who hold prejudicial beliefs. We must confront these nonsense ideas whenever, and wherever, we are confronted with them. To do anything less is to accept them. The time for silence is over.
Labels: Notes from a shit stained reality