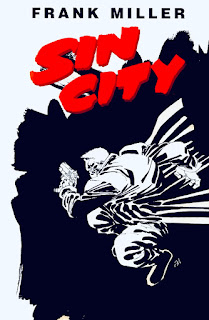 The Hard Goodbye by Frank Miller
My rating: 4 of 5 stars

Much like his classic, The Dark Knight Returns, helped to redefine the Batman franchise forever, Sin City has changed the way we view graphic novels forever. Both in terms of art and story. Making Frank Miller the now accepted master of the dystopian anti-hero, as he has contributed more to elevating the American comic into the form of the novel that we know and love today, than anyone else.
Along with Mike Mingola (of Hellboy fame) Miller is also one of the few American creators whose artworks echoes the ligne claire (clear line style) of great Franco-Belgian graphic novels like Largo Winch by Philippe Francq and Jean Van Hamme.
Often Miller doesn’t even show you a character, buildings or action. Only positive and negative space. Which immediately attracts the readers attention as light and shadow dance with one another directly on the page. Sort of like a tabloid serial illuminated by flashbulbs. It’s what I imagine an art museum in Quentin Tarantino’s subconscious looks like.
You might think this simplicity would take away from the overall experience but it doesn’t. It actually lends the novel a very unique and stylized look. A look which is unquestionably an avant-garde visualization of the pulp noir imagination, and it’s use of language likewise owes much to the hard-boiled pulp novelists of the 1950s, perfectly intertwining artistry with an action packed noire detective story without a detective.
The Hard Goodbye, tells the story of Marv, a bulldozer of a man whose face is as scarred and broken as the many men he’s busted up over the years, so when he winds up bedding a gorgeous blonde goddess by the name of Goldie he feels like he’s hit the lottery.
However, this happiness is short-lived when he wakes up to find Goldie dead next to him. Clearly, she’s been murdered somehow but the killer was quick, silent and didn’t leave any tracks. On top of that, whoever killed Goldie called the cops and they are eager to pin the crime on him, but Marv isn’t the type of guy who will waste time explaining to the authorities that he had nothing to do with her murder.
Although he didn’t know her well (or at all, for that matter), Marv appreciated Goldie’s kindness toward a brute like him so he takes it upon himself to find out who killed her and get revenge. He drops by his parole officer for some meds (Marv tells us he sees and hears things that aren’t there) and then begins to head into Sin City’s worst dives for information. Actually, he tends to beat the information out of people and it seems to point him into even stranger territory.
Marv is quite possibly one of the most perversely appealing fictional characters I’ve ever run across, barring Jean-Baptiste Grenouille. Unlike the latter, however, there’s a side to Marv that’s tender, even sweet. Frankly, he reminded me quite a bit of Don Quixote. OK, so the good Don wasn’t an overgrown lug who wasn’t satisfied until his victims screamed, but Marv’s worship of a woman he barely knows, his refusal to hurt dames, his relentless quest for her killers, the confusion over what’s real and what’s not and his willingness to take on a task despite the overwhelming odds because it’s the right thing to do, made me think of Don Quixote more than once. Marv is no doubt a psychotic character, yet one with an unwavering moral code, and goddamnit, I liked him for it.
In short: The Hard Goodbye is a beautiful work of art. It's deservedly famous for its graphic style; as mentioned, a style which sometimes fails, but succeeds more often than not. Every frame makes a contribution, as the story marches from page to page, with no time or room for drifting. Sin City is a filthy, dangerous and menacing place, and the illustrations conveys this atmosphere and tension flawlessly. It's destined to remain a classic. Is it uncompromising and extreme? Yes, but it’s also utterly fucking brilliant.
Labels: Book Reviews Graphic novel reviews