Book Review: Mitch, Please!: How Mitch McConnell Sold Out Kentucky (and America, Too) 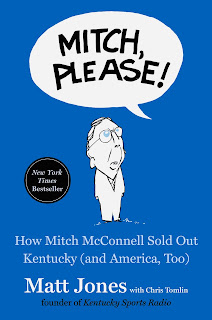 Mitch, Please!: How Mitch McConnell Sold Out Kentucky (and America, Too) by Matt Jones
My rating: 4 of 5 stars

U.S. Rep. John Yarmuth, has known U.S. Sen. Mitch McConnell for four decades. He’s known him for so long that he, and a more-reasonable McConnell, were even political allies early on. But his view has changed during McConnell’s tenure in the Senate, as he told fellow Democrats at a 2013 dinner: “I can be really brief tonight and just say — Mitch McConnell sucks.” As a Kentuckian, I can vouch for this.
Addison Mitchell McConnell Jr. is the second Kentuckian to lead his party in the Senate, the longest-serving U.S. senator for Kentucky in history, and he is also the longest-serving leader of U.S. Senate Republicans in history. Yet, for a man who supposedly represents the people of Kentucky, he has done everything but that and in many instances he has actually acted against what would have been in their best interests. And by employing a sharp political scalpel, administering a tendentious but effective combination of description and vivisection, Jones eviscerates McConnell at every turn. Presenting a perfect case study as to why there must be term limits on all of our public servants.
Visiting all of Kentucky’s 120 counties, and speaking with a wide array of locals—from right to left—Jones and his companion, Chris Tomlin, who mostly contributes snarky footnotes and humorous barbs, find themselves uniformly welcome on their travels (except, oddly enough, in one church); and by the end even manage to strike up a friendship with the “tracker” whom McConnell’s team sent to follow them around in search of career ending improprieties. But, if you’re worried about this being partisan hackery, don’t be. Even Republicans can learn how their standard bearer forgot about the people that elected him at the expense of the state he now represents.
What struck me most about the book however, was it’s format. Yes, its social commentary; yes, it’s a unique travelogue, but it’s also a profoundly personal reflection of one mans decision on whether or not he should enter into a life of public service. And I related to this aspect of the book, more so than any other, simply because, much like the author, I too have struggled with this same decision. Although, unlike Jones, I ultimately decided to take the plunge into the corrupt cesspool that is Kentucky politics, once vying for a seat on Whitesburg’s City Council.
Though he’s no literary match for chroniclers like Calvin Trillin, Jones does have a quite remarkable ability to evoke place, to bring to life a whole world in a single unexpected image, to pull a perfect sentence out the air with the ease of a child netting a butterfly. His style, though un-fancy, is a style which conveys much enthusiasm and passion. Even if he struggles, terribly, at times trying to find new things to say about each location. But, to be fair, how many writers have been able to take a place and weave a thousand details and feelings and moments into a single near-definitive portrait?
Yet, beyond all of the obvious anecdotal and political dimensions, the real story here is the story of Kentucky itself, and any American who seeks to understand places like Kentucky, in addition to our atrocious senator, should give this book a chance. It’s a rare occurrence to come across such an important political book as this one, that is both easy to read and full of good natured humor. And I applaud the authors for providing us with the opportunity to celebrate our great state with it’s many quirky characters and forgotten stories or, in my case never before known stories, as each bears witness to how politics, as so many of us as like to ignore it, is directly intertwined with everyday life.