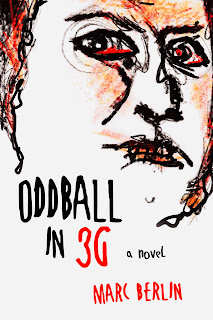 Oddball in 3G by Marc Berlin
My rating: 4 of 5 stars

People often get basic psychological questions backwards. Why do people take drugs? It’s not a mystery. The mystery is why they don’t take them all the time? Why do people suffer from anxiety? That’s not a mystery either. How is that people can ever be calm? We’re both breakable and mortal. A million things can, and do, go wrong, in a million different ways. We should be terrified out of our skulls at every second. But we’re not. The same can be said for depression, laziness and criminality.
Yet, a further, and perhaps an even more foundational question, is this: How is that even though thousands of people experience, and are largely the result of differing sets of pathogenic circumstances, many still somehow manage to live normal lives? While still others become “synthesized” by those same circumstances, culminating into the unique figure we find residing at the heart of this book?
Much like any other millennial, Robert is a peculiar thirty-four year old, suffering from anxiety attacks and the stress of being unemployed, and recently single, while also worrying about his elderly mother, whose house it seems is always in perpetual need of repair. But once his neighbor and casual acquaintance is attacked by a group of hired muscle, one thing leads to another, and abruptly Robert’s life seems to be spiraling out of control. What comes next is a fairly straightforward tale of revenge, with one bad guy after another falling before the unstoppable force that is Robert Kreiger.
In a way, this book feels like Berlin’s take on a superhero/villain origin story — no costumes, no inspirational catchphrases, just lots of blood and trash bags full of severed parts. We learn a great deal about Robert in the first chapter with brief depictions of his background and interests, which become further developed as the narrative progresses. Although, as a character study there is not much to get here. Robert reads like an aberration, present solely to make the reader consider their own definitions of sanity. To explore it further than this is to invite chaos and, well, that’s exactly what we end up with.
It’s clear from the beginning, that Robert is going to be a protagonist with a desperate need to make some sort of connection--to share or mimic the effortless social interactions he sees all around him, but does not, or possibly can not, participate in. This consummate isolation is actually one of the books most powerful aspects, and conceivably is also one of the reasons as to why so many people connected with Travis Bickle in Scorsese’s, Taxi Driver. The buried message in both narratives is that of alienated men, who are unable to establish normal relationships, and so become loners. Juxtaposed with Oddball’s generous number of noteworthy instances of violence, and Robert and Travis both become perfect metaphors for our society. They may not be easy to look at, but they represent the true dark side of humanity that many prefer to ignore. And so, if anything, Oddball is going to shake people up and bring certain critical issues to attention, whether thats violence or the need to treat mental illness or the need for civility and for people to start talking with each other instead of at each other.
However, while the author wants credit for touching on these issues, he doesn’t really know what to do with them. Mental illness of course plays a huge role, but Berlin just sort of lets it sit there. He doesn’t have anything really interesting to say about it. But he does still manage to raise a very discomfiting question: What if one day the dispossessed decide to fight back? And I don’t mean with a clipboard registering people to vote?
Overall, I found the writing very entertaining and I was immediately drawn into this underworld of alienation, loneliness, haplessness and anger. The minority of colorful characters likewise helps to drive the amusing plot, as do the everyday events of city life in America. It also contains some very well-executed dark humor; for example: "Looking at myself in the rearview, I discover my eyes now have the irrational look of a person who’s just dumped a hooker at Walden Pond State Reservation then ordered her to stab herself in the arm." At this point in the book, Robert had done exactly that. Which showcases the genius Berlin brought to the character, there is zero spoon-fed sympathy. We are not forced to like Robert — or even hate him. But Robert’s unpredictable behavior, nevertheless, makes him completely engaging.
In short, the book struggles to understand why innocent people turn into madmen after they can no longer keep it together: rather than feel depressed by this, the reader will actually end up thanking Berlin for connecting them to a new desire — not to run to the nearest exit to save their own ass but rather to stand and fight, all the while knowing, they had the power to do so all along.