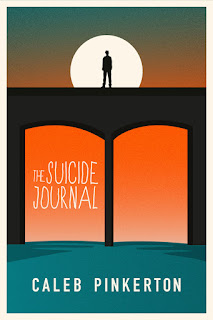 The Suicide Journal by Caleb Pinkerton
My rating: 4 of 5 stars

Cal is out of touch with life. He's either running to catch up or waiting on others to catch up to him. Due to his personality, he simply sees and feels things that others don't. He just doesn't always seem to understand some of the implications of what he sees. He is a deep thinker in the Holden Caulfield vein, both socially awkward, but both also fiercely intelligent and Pinkerton displays a great sensitivity to the character, with an even greater sensitivity for convincing dialogue:

“Have I done something to offend you?”
“No, not really,” he said. “It’s just...” His words hung in the air as I heard the gears of his mind grinding towards an answer. I wanted to make him say it. To make him uncomfortable. To finally put up some resistance. But I couldn’t.
Even then, with nothing to lose, I couldn’t.
“It’s ok, I get it,” I said, offering him the reprieve he needed. “Maybe I’ll see you around.”
“Yeah, maybe,” he said and hung up the phone.
And that was how I lost my best friend.

Told from Cal’s point of view, this novella is written in a series of journal entries, as the author takes us through a succession of vignettes from Cal’s life centering around his decision to kill himself and the reasons he has come up with as to why. I admit that I was a bit skeptical of this format at first as I felt this might become a little tedious, but instead it had the opposite effect, becoming a rejuvenating, yet contemporary, way of telling a familiar story, a story which draws you in to the life of a haunted and confused young man.
As odd as it is to confess, this has actually been one of the most uplifting books I've read this year and it covers a lot of penetrating issues without glaring at them through a judgmental lens. I also really appreciated the fact that this book doesn’t overhype any part of life. It is not trying to sell you on anything and I can’t begin to tell you how goddamn refreshing that is. The language is simplistic, yes, but it still manages to hold layers upon layers of meaning (again, much like Catcher in the Rye.) And it has earned its space on my shelf for two lines alone, even if I hadn't really enjoyed it: "I missed the old pain I used to feel. The pains of a normal life” and “Doubt has always been a dominant force in my life.”
However the emotional power of the last act is weakened by the flood of new information. The key revelation near the end explains a lot, but it comes so late that all it can do is explain. If it had come earlier, it would have had to have been dealt with, and those scenes might have been considerable. The book might have been stronger as simply the story of a family trying to heal itself after a tragedy, with the focus on Cal and his sister.
Nevertheless, I have no reservations whatsoever in stating the following: I now consider Pinkerton as one of our most under appreciated talents, a writer whom I believe is poised on the edge of mainstream success. He’s going to get there one day, and nobody’s going to cheer harder than me when it happens. (I mean, I guess he might cheer a little harder, but I’ll be a close second.) I’m thankful that he decided to share his imagination and immense talent with me and look forward to the day when even more people share in the joy of a new Pinkerton release. In the meantime, grab yourself a copy of The Suicide Journal, a book which, I’m sure, readers will be discovering and enjoying for years to come.
I hesitate to say much more than this because I feel like there would be no point in doing so. I read this book obsessively. I went to a bar and ordered a beer and sat down with it and sometimes looked up and took a break and listened to the conversations around me. Then I ordered another beer and read some more. It did not matter to me that I ended up crying alone in a bar. It was merely how the world was and I was living in it. Sometimes that happens. You come across a book that you’re not ready for and it reminds you exactly of who you once were and all that you still hope to be. Which is one hell of an accomplishment.