Art Review: The Ugly Duchess aka (The Grotesque Woman) 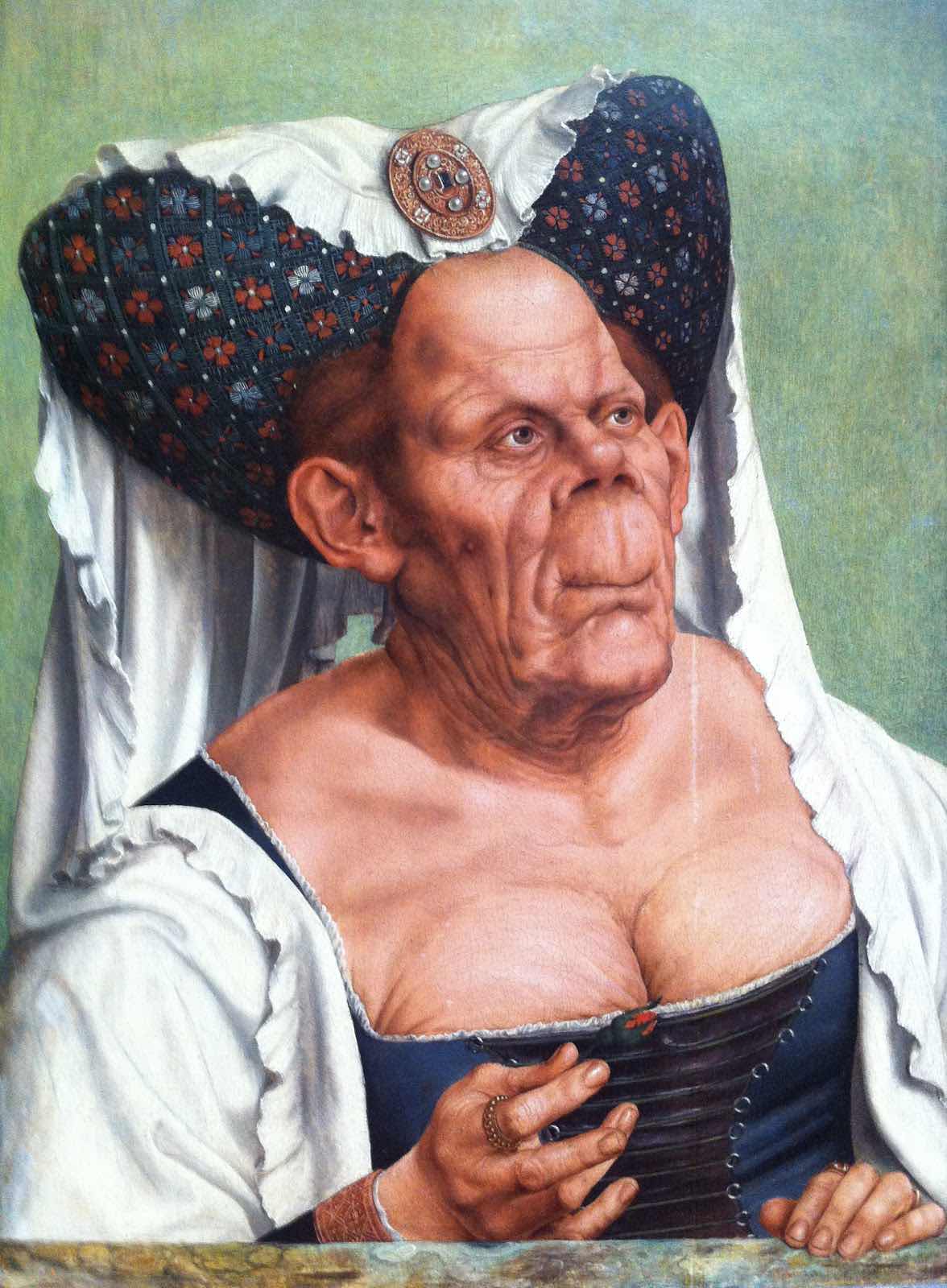 I’ve always been intrigued by this painting. It’s fascinating. It has been meticulously and lovingly painted. But, as you look at it you might think, why would someone go to so much trouble to paint such a grotesque image?
The Ugly Duchess is Quentin Matsys’ best-known painting. Measuring 62.4 by 45.5 cm and rendered in oil on oak panel, it is one half of a diptych, along with Portrait of an Old Man and was painted sometime around 1513, when culture and art were flourishing during the Renaissance.
In the portrait, we see that the woman is clearly “ugly” yet, she does not seem lewd, nor does she seem made up. In Matsys’ portrait - perhaps just because of the oils - she looks like a real individual, especially in the eyes. And so there have been many questions as to who this woman was, who drew her first (assuming she is the same woman), and why she was painted. Was it a commissioned portrait of an individual, or a grotesque head done for fun? Is the grotesque women meant to depict a real person? 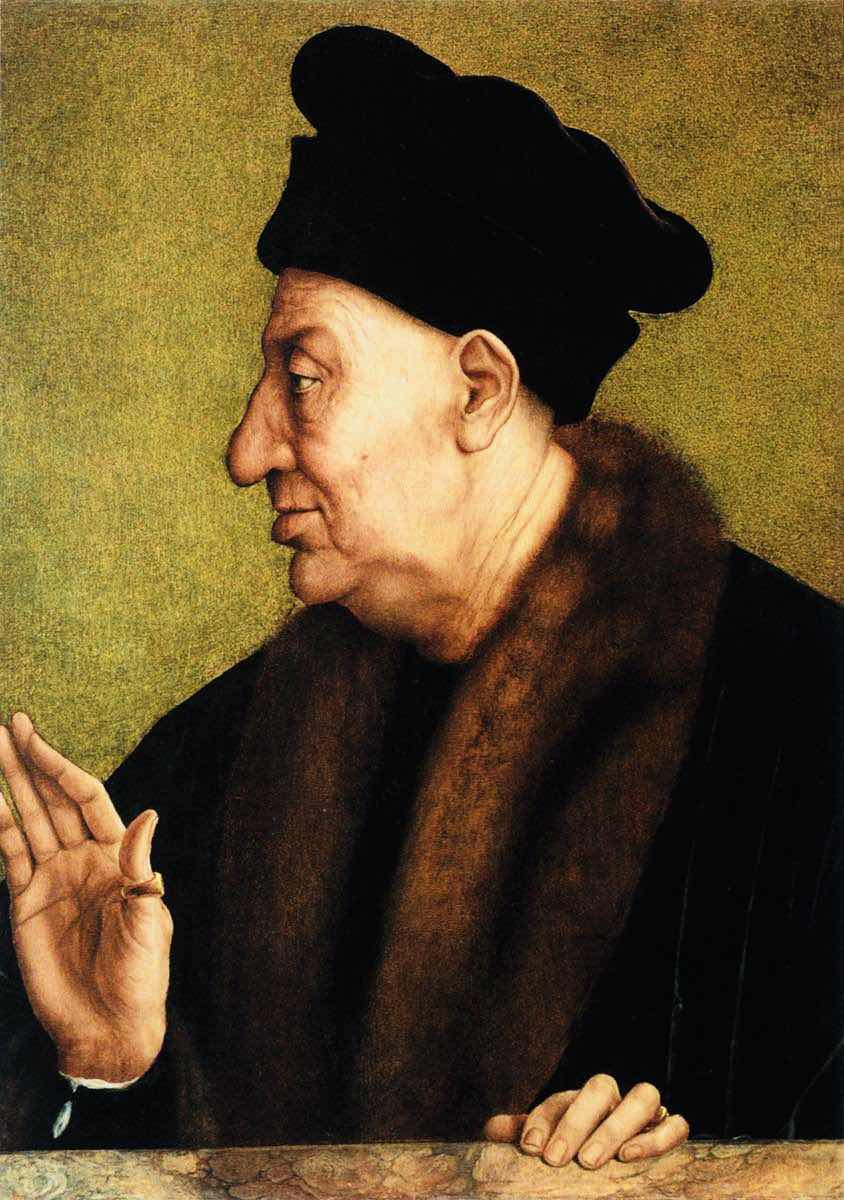 Portrait of an Old Man, the second half of the diptych.
Given that Matsys was a highly paid artist at the time tends to lend credence to the idea that the sitter may in fact have been a real person; either a political figure or an important noblewoman. Widely believed to be Margaret, the Countess of Tyrol, who was also known as “the Ugly” or “Satchel-mouth”, even though she died 150 years before the painting. It’s speculated that the sitter could have also been some form of novelty act, traveling the various courts of the time as an object of fascination and earning money from her disfigured appearance. This apparently common practice is supported by her extravagant clothing, which is not in keeping with traditions of the time and would have been considered ridiculous. As she wears the aristocratic horned headdress of her youth, out of fashion by the time of the painting. The unbloomed bud in her right hand coming to symbolize that she is trying to attract a suitor in vain; further exhibiting her as a figure of fun.
Still other claims allege that the Flemish painter was influenced by Erasmus’ essay In Praise of Folly which was first published in 1511. In his essay, Erasmus satirizes women who “still play the coquette,” “cannot tear themselves away from their mirrors” and “do not hesitate to exhibit their repulsive withered breasts,” criticizing automatized beauty standards which were deemed unnatural or frowned upon. Beauty in the Renaissance era functioned as an outward sign of one’s inner self. Beauty was associated with goodness, and ugliness with vice. Paradoxically then, females – as the original temptresses – were either beautiful and pure, or ugly and lecherous.
The significance of this work can also be confirmed by the revealed discovery that the Duchess was the inspiration for the creation of John Tenniel’s Duchess in his illustrations for Lewis Carroll’s Adventures of Alice in Wonderland. 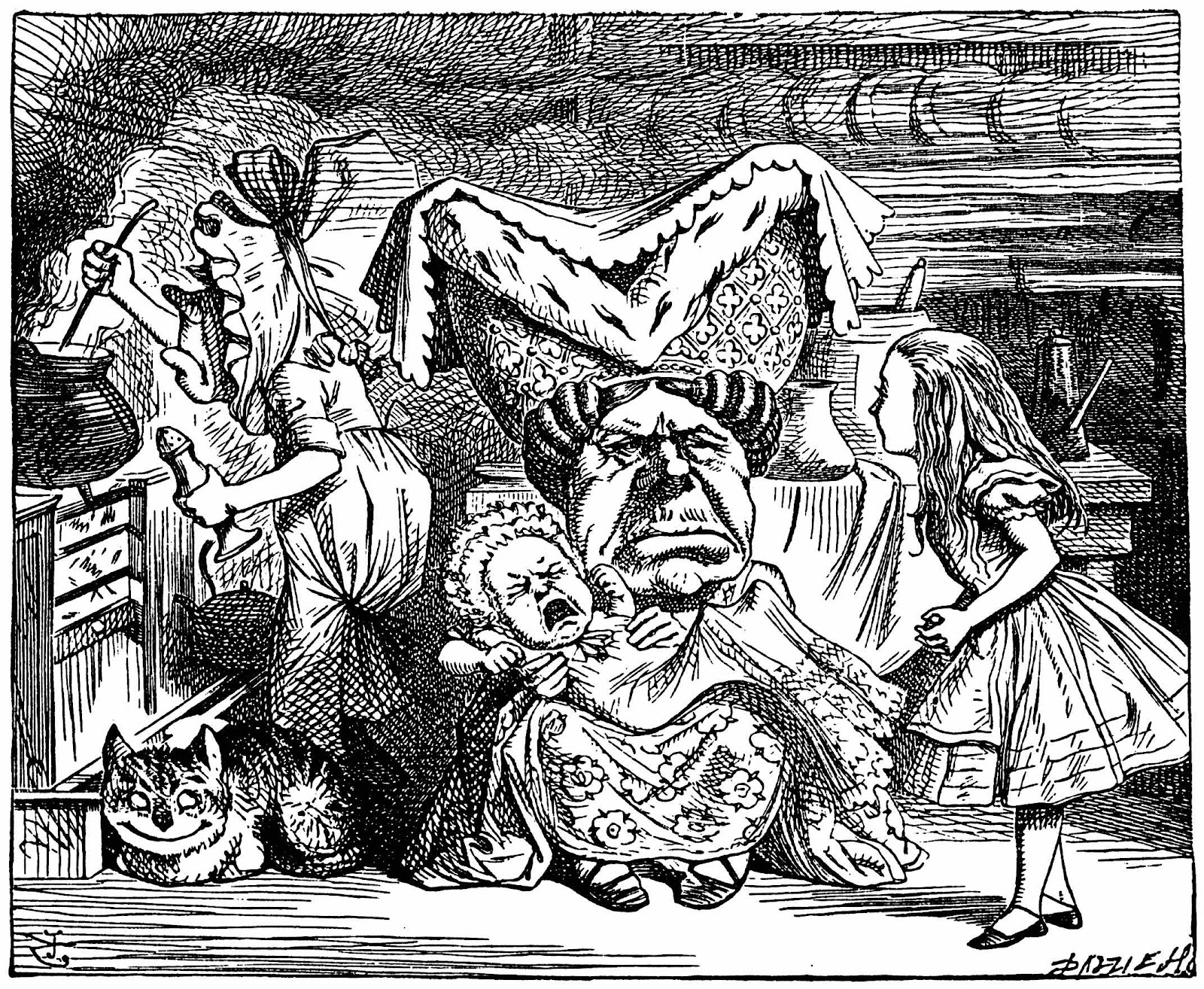 John Tenniel’s illustration of the Duchess from Alice’s Adventures in Wonderland, 1865
Another important piece of research about this painting regards the assumption that Matsys copied DaVinci’s work because, reportedly, his paintings were very similar to DaVinci’s drawing. However, this case was solved as soon as a team of art experts discovered that it was actually Leonardo who copied Matsys. Leonardo despairing of finding true beauty after struggling with his Vitruvian Man, decided to turn more to grotesques and caricatures. 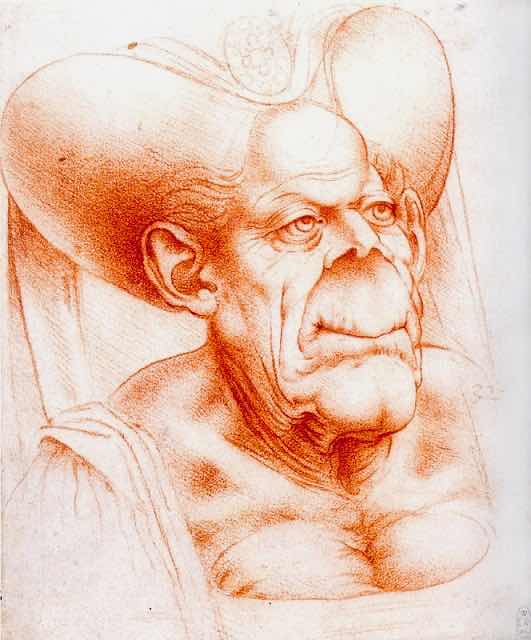 Grotesque Head – Leonardo da Vinci (c. 1480-1510) Red chalk on paper, 17.2 x 14.3 cm. Windsor Castle, Royal Library
But again: did the poor lady really look like this?
Michael Baum, a medical professor of surgery at the University College of London, has an explanation for the unfortunate facial features of the Duchess. The professor, along with his student Christopher Cook, researched the famous painting and came to the conclusion that the sitter may have had a rare bone disease, known as Paget’s disease - an abnormality of the metabolism which enlarges and deforms the bones.
Whether or not she was based on a real individual however, is irrelevant to my appreciation. Because I would argue that she falls into the tradition of the caricature, placing her squarely at odds with beauty. Notice, how despite her ugliness she is not revolting. Caricatures, by creating a harmony out of the disproportions of ugliness, neutralize the bad associations that ugly females had. Albeit at the same time as it mocks and dehumanizes its subject, caricature elevates ugliness to a kind of beauty. It is a really interesting phenomenon, documented succinctly in Umberto Eco’s On Ugliness.
Nevertheless, and as art critics have stated, The Duchess is a painting that one either loves or hates. One thing we do know for sure, one that unites all of us, and despite the fact that we now “know better” than to gawk at the suffering of others, there will always remain a “magnificent absurdity” to this paintings popularity.
Labels: Art reviews