Book Review: Go Tell It on the Mountain 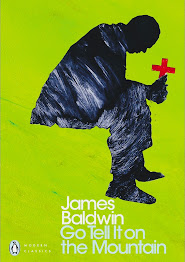 Go Tell It on the Mountain by James Baldwin
My rating: 3 of 5 stars
In talks and essays, Baldwin laid out some of his ideas about what he thought made an unsuccessful novel, citing problems like too neat a frame, sentimentality, and facile lessons and solutions. I’m not sure the name of the novel he was referring to, although, he claimed, it was both “unwritten and probably unwritable”, yet he could have very easily been talking about this one.
Written after Baldwin gave up being a youth preacher and left the church to become a writer, he worked on this book for more than ten years, including while he was living in Greenwich Village and Paris, and only managed to finish the book in 1952, after he'd moved to Loèche-les-Bains, a village in the Swiss Alps. “Mountain,” Baldwin said, “is the book I had to write if I was ever going to write anything else.” Which is something I can understand completely.
Written as a semi-autobiographical novel, Mountain tells the story of one day in the life of the poverty-stricken 14-year-old John Grimes, mostly spent roaming the streets of New York and reflecting on the various demons ruling over his life: his violent preacher stepfather, his church, and the racist society into which he had the misfortune of being born into. And captures an essential aspect of life in America, its contradictions and seductions, that bittersweet mix of love and hate that so many feel towards the country.
The book is divided into three parts: In part one, we share John's terror as he becomes aware that his desires and goals lie outside of the narrow expectations of his family and community. In the second part, we learn of the sorrowful experiences back South and up North that forever scarred John's father, Gabriel, and his mother, Elizabeth, even though they hoped their union would wash away the sins of their past. In part three, John surrenders himself to religious ecstasy, still seeking a way out of his dilemma.
And so, even though the majority of the novel takes place over the course of a little more than day, it covers an immense amount of backstory. Leaving you exhausted throughout, breathing a heavy sigh of relief when you can finally put the book back on the shelf. It is great writing, yes, but it is mercilessly emotive and present: there is no down time with Baldwin.
Initially entitled: “Crying Holy”, Mountain is considered to be Baldwin's greatest novel, yet I struggled to engage with it. Parts of it read as if it were being delivered from the pulpit; a 226 page sermon. It’s very much written in a style similar to the Bible, particularly the King James Version. Many of the passages use the patterns of repetition identified by scholars such as Robert Alter as being characteristic of Biblical poetry. Baldwin actually makes several references to the Bible in Mountain, most importantly to the story of Ham, Noah’s son who saw his father naked one day. Noah consequently cursed Ham’s son Canaan to become the servant of Noah’s other sons. Baldwin also refers to several other people and stories from the Bible, at one point alluding to the story of Moses leading the Israelites out of Egypt, and drawing a parallel to that exodus and the need for a similar exodus for African-Americans out of their subservient role in which whites have kept them. And John's wrestling with Elisha evokes the story of Jacob wrestling with a mysterious supernatural being in Genesis. And while Baldwin was most likely an atheist at this time, he seems to have remained passionate that religion still has an important role to play in people’s lives. Which is one of the things I loved most about the book. It never made any direct comments on whether religion is good or bad, it sort of just let the characters play out in messy reality.
Much like the books author and protagonist, I too was raised in a very religious home, by well meaning parents, and yet I always felt like something of an alien, whilst there. This was not me. I did not pine for apocalypse. And I eventually left. But to this day, I often still wonder what those first twenty years of faith, of “belief” were constituted of. I still ask John’s same question. It’s a profound question. What is the difference between “belief” and coming to believe you believe? Like John, I was of the latter camp, and, fed by his confidence (Baldwin’s, too), I left. I chose the here and now, to explore and sanctify the physical world, daily. I made my decision. I would not be like my father, or my father’s father. I would have another life. “Oh, he’ll come around.” One relative or another has said, referring to my religious departure. But what they’ve failed to consider, let alone understand, is that some people are destined never to return.
Labels: Book Reviews