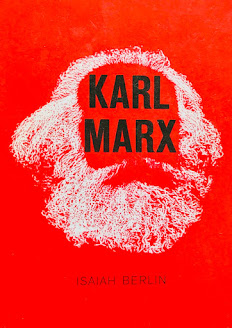 Karl Marx by Isaiah Berlin
My rating: 3 of 5 stars

Marx’s age was a pivotal, tumultuous age. A time punctuated with big, bold and dangerous ideas that would inevitably drag the rest of the world kicking and screaming into existence. And so, it takes a lot of courage, not to mention a strong will, to write a biography of Karl Marx, especially if the writer has dared to go through all 40 volumes of his writings and correspondence.
Most of the reviewers of this book that I’ve seen, however, seem to think that since the lack of Marxists in departments of economics, history and philosophy is somehow proof of the inadequacy of Marx’s theories, which left one reviewer to absurdly wonder: “why the rest of us should bother with Marx’s ideas now that the Berlin Wall has fallen.” (Which is the equivalent of wondering, since America has never had a female president, why bother with algebra). And so I feel that the time has never been better for a return to Marx, as all parts of the ideological spectrum have distorted his ideas in the most ridiculous of ways. He is forever being stupidly linked with Stalin, by both Stalinists and apologists for capitalism. So this is as good a time as any to set the record straight.
What I loved best about Berlin's analysis was that while personal details were critical to the narrative, Marx's relationship with the ideas that came both before and after him were far more important to the author. We learn not only about Marx, but about Hegel and Engels, Lafargue and Duhring, Saint-Simon and Feuerbach. And it was rather refreshing to read how nonpartisan Berlin is with his analysis of the man's philosophy. Instead of writing as a fawning Trotskyist or a fuming anticommunist, he is merely writing as someone whose first allegiance is to the intellectual approach, albeit his own pluralistic, skeptical, emphatically liberal-democratic intellectual approach. And it is to Berlin’s credit that he treats Marx’s ideas with great respect. He doesn’t insist that Marx’s analysis in Capital is flawless, but sees it as a work of the imagination, its purpose an ironic one, juxtaposed with grim, well-documented portraits of the misery and filth which capitalist laws create in practice.
Berlin likewise represents, very well, the thinking in many British academic circles about Marx on the eve of World War II. In 1939 when this book was first published, communism existed only in the USSR and many observers thought that it was very unstable and might ultimately be eliminated. Ten years later, Communism had spread to China and ten or so additional European countries. Everywhere it was very solidly implanted. In other words, the world has a much different view about the posterity of Marx than at the time Berlin wrote his book. And yet, Berlin's book, while excellent, no longer represents the current academic debate around Marx.
Nevertheless, Berlin still managed to write an extremely readable book, even though it’s a relatively short one, which is why I recommend it as a place to start for those who are becoming interested in Marx and Marxism before turning to Marx’s writings—or perhaps as a companion to a reading of Marx’s works in more or less chronological order. Much that can appear hard to understand without the contexts of times, places and personalities becomes easier to comprehend when those contexts are provided. This is the exact type of book that has given Oxford University Press such an august reputation.
I was however, hoping to learn a bit more about the economics of Marxism, but instead ended up learning more about Hegel, I’m afraid. Which is ultimately the reason for not giving the book a 5 star rating, as the book is otherwise very engaging and, unlike most books about German philosophers, clear in its prose and purpose.
Yet in spite of being readable, Marx is still not an easy book to read. There is no air-brushed Marx in its pages. It portrays Marx as a courageous revolutionary, a brilliant thinker, a sophisticated political strategist, a charming conversationalist, a Victorian gentleman, an unreliable provider for his family, a careless spender of other people’s money, a man all too willing to rely on his most loyal friend (Engels) to cover up his shortcomings (at earning money, writing articles, and meeting deadlines) and, at times, someone who simply did not seem to think very much about the consequences of what he was doing for himself and those he loved most dearly.
I also think it’s important to point out that since in history class we are all taught the same comforting doctrine of progress: Horrible things happened in the past like slavery and the Black Death, but the world is now a more gentle and enlightened place. Still, it is in this world today that more than seven million people die from hunger each year, even though it has never been more obvious where to find the money that could save them. Remember: Marx is forever telling us more - never less - of what it means to be human. Which is why I consider Marx to be primarily a philosopher of freedom, a man who sought to make the world rather than be made by it. And as Friedrich Engels wrote in 1883: “We are what we are because of him: without him we should still be sunk in a slough of confusion.”
Labels: Book Reviews