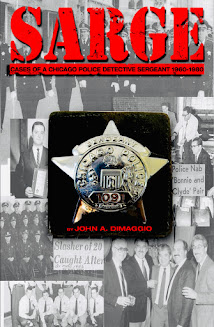 Recently published by the late John DiMaggio, Sarge, was a long time in the making. “He wrote it over many years, both while he was working and after he had retired and was living in Las Vegas,” says the author’s daughter, Debra DiMaggio, who was the primary force behind getting Sarge into print (and who also was kind enough to send me a review copy). “He asked me and others to help get it published. I’m a divorce attorney and although we reached out to a few friends, we didn’t have contacts in the publishing and entertainment industries at the time. When dad passed away in 2008, my brother sent me the typewritten manuscript and I added the photos. From there, contacts started to develop organically.”
Eventually, the manuscript made its way into the hands of Raymond Benson, an internationally acclaimed author and the first U.S. author recruited to carry on Bond creator Ian Fleming’s literary franchise after his death, and from there he helped to refine the text and shepherd it into publication. The result of which is a taut, action-driven police docu-drama that will leave you both turning the pages and occasionally stopping to reflect on the Chicago that once was. I know I found myself, several times, stopping and researching the people and places described in the book, as I wanted to know as much as possible about our infamous city.
DiMaggio, I soon learned, was also a fairly competent writer, and this memoir is both funny and sad by turns. He captures the first strange days of the rookie, the daily maneuvering of politics (something people are forced to pay an especially close attention to if they want to survive in any office environment), and the numbing horror of witnessing the “evil” things people do to each other day in and day out. His writing is engaging, emotional, and genuine. There is however, some content that is incredibly difficult to read wholly because of how heartbreaking those experiences must have been, not only for the author, but for the victims as well.
Though admittedly, I didn't think I would enjoy this book as much as I did, it’s just not what I normally read. Likewise, I was unsure how the author would translate the reality of the job onto paper in a readable and entertaining way. I know it’s not easy to write a memoir like this. In fact, I'd say it’s probably extremely difficult. To describe the important parts of one's own life in a way that's relatable and meaningful to the total strangers who will inevitably read it. Additionally, within the genre, it must be a very difficult challenge to write about a world unknown to so many readers and accurately convey the intimate horrors of any form of devastating emotional distress. Yet, DiMaggio has done a terrific job on all three counts. Which is quite a remarkable feat.
Moreover, his message, if there in fact is one, is that we should take greater care of our fellow human beings. The compassion DiMaggio exhibits is both solid and tangible. People mattered to him. There is also a message in here that is directed solely to our lawmakers, politicians and influencers. Because DiMaggio is correct when he writes that most politicians don't understand the operational complexities of policing. And in our own times that has never been truer.
Nevertheless, this book is an honest account of an honest life and I appreciated every word. DiMaggio’s vivid descriptions, coupled with his vulnerabilities, draws you into his world leaving you incapable of experiencing anything other than a palpable feeling of empathy for the man he was. He also made me think and that’s never a bad thing.