Book Review: Too Much and Never Enough: How My Family Created the World's Most Dangerous Man 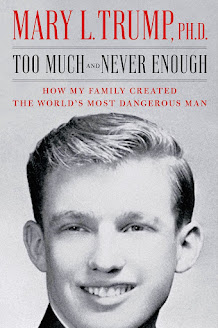 Too Much and Never Enough: How My Family Created the World's Most Dangerous Man by Mary L. Trump
My rating: 3 of 5 stars

Like America, Donald Trump claims to be unique, exceptional, a shining self-creation, just short of a god. This book, by his now estranged niece Mary Trump however, demolishes this myth in spectacular fashion.
Too Much and Never Enough, lays bare Trumps total lack of redeeming qualities. Part memoir, biography, and clinical case study, the book hits all the right notes. It is deadly serious, achingly sad, grave, chillingly surreal and though deeply psychological, reader friendly and even humorous at times. For those who are wise enough to heed its warnings, it is also a cautionary tale of how the tsunami of relational dysfunction washes over families generation after generation and how those in its path become its victims. And learning what makes the president tick is likely to provide readers insight and enlightenment, but little pleasure or satisfaction. Like all of us, Trump is perhaps doing the best he can in his position, but that is far from good enough for the rest of us. The author insists that he is incapable of change, so there is no choice but to make change happen to him come November.
Nicknamed “The Great I-am” by his brother Freddy, Trump is, without a doubt, a modern day version of Jim Jones. Both are narcissistic, sociopathic, lunatics who have/had no problem with killing their own supporters. So broken is Trumps brain, and the brains of everyone around him, that it was agreed that the president would look tough if he had a militarized police force tear-gas and rough up unarmed peaceful protesters in a public space so that he could walk through a park and stand next to a church holding up a Bible like it was a birthday gift he didn’t particularly want. Former Wisconsin Governor Scott Walker practically creamed his Dockers over an ensuing shot of the frowning president walking resolutely toward the church. The only other people who fell for the stunt were conservative B-listers who were nakedly trying to get jobs in the White House, or at least Cameo. Trump ended up looking like a fool, and everybody who wasn’t angry with him was laughing at him.
He’s just so astonishingly stupid. But of course, Trump doesn’t think of himself in such terms: “Actually, throughout my life, my two greatest assets have been mental stability and being, like, really smart,” adding: “I went to an Ivy League college … I did very well. I’m a very intelligent person.” Yet, one of his professors at the University of Pennsylvania’s Wharton School of Business and Finance has remarked that he was, and I quote: “the dumbest goddamn student I ever had.” More accurately, Trump is a thin-skinned, narcissistic, and vindictive bastard. As dozens of Republican foreign policy experts put it: “he is unable or unwilling to separate truth from falsehood. He does not encourage conflicting views. He lacks self-control and acts impetuously. He cannot tolerate criticism." Okay, but what about emotional intelligence?
This is where Trump shines. He knows how to manipulate people. He has an uncanny ability to discover their emotional vulnerabilities – their fears, anxieties, prejudices, and darkest desires – and use them for his own purposes. To put it another way, Trump is an extraordinarily talented conman. He’s always been a conman. He conned hundreds of young people and their parents into paying to attend his near worthless Trump University. He conned banks into lending him more money even after he repeatedly failed to pay them. He conned contractors to work for them and then stiffed them.
Granted, he’s never been a particularly astute conman. (Had he been, his cons would have paid off). But he’s been a great political conman. He conned 62,979,879 Americans to vote for him in 2016 by getting them to believe his lies about Mexicans, Muslims, African-Americans, Barack Obama, Hillary Clinton, and all the “wonderful,” “beautiful” things he’d do for the people who’d support him. (And he’s still conning nearly every one of them).
Nevertheless, and out of all the titles Trump has held: CEO, president of Trump Management, etc., he still remains nothing but a parasitic landlord, much like his father; who tries his damndest to pass himself off as a property developer. He embodies every weakness America has. Every petty thing. (He’s the type of guy who still talks about that one touch down he had in high school forty years ago. The type of guy who peaked in high school and who’s only shot at “success” was only ever going to be “running” his daddy’s company. I went to school with a few of these dullards myself).
And while initial excerpts from the book made it appear to be a mean-spirited compilation of the president’s greatest bloopers, it is actually an in-depth, insightful, intelligent analysis of how he came to be who he is today. Readers seeking a presidential roast might be disappointed, as anecdotes showing the president at his worst are as heart-wrenching as they are humiliating. Sadly, no one can make him look as small as he manages to make himself look. Curiously enough, I do have much greater feelings of sympathy for the man now than I did before, but fuck him nonetheless. He needs to be treated in a mental hospital, not sitting behind a “resolute desk” in the Oval Office.
Questions will undoubtedly be raised as to why the author chose now to air her families history. Earlier it might have been more helpful, changing the course of our current trajectory. But rather than berate her for not having warned us sooner, and by publishing the book now—four months before the most critical election of our lifetime—we should be thanking her for helping us, the electorate, understand how we have been preyed upon and played by a man who never grew up. If she is bitter, it fails to eclipse other emotions. And even if she is, it still does not preclude her from telling the truth.