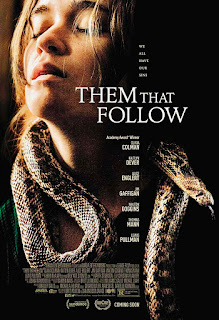 Directed by: Britt Poulton and Dan Madison Savage
My rating: 4 of 5 stars
In 2014, Kentucky pastor Jamie Coots died after being bitten by a rattlesnake during a service at his tiny Middlesboro church. It was the tenth time the Pentecostal leader had been bitten during his tenure as a snake handler, and the last time he refused medical attention for a poisonous bite. At the time, his son Cody told the local CBS affiliate: “When it’s your time to go, it’s just your time to go.”
Snake handlers believe a bite will result in one of two things: death (obviously, but that is never a black mark against the victim) or recovery. And if you live through a snake bite, it’s a sign that your faith is so powerful that God is compelled to heal you; your dedication is both the reward and the reason for coming out the other side.
This decades-old practice continues on in a handful of churches, set deep in the Appalachian mountains, places just like the one where Coots received his final bite. Places where strange and sometimes horrifying things still transpire in a part of the world that people can’t always see from the highway.
Such is the faith that guides the kind of Pentecostal snake handlers who populate Britt Poulton and Dan Madison Savage’s Them That Follow, devotees of Christ who interpret the King James Bible to literally encourage each other to “take up serpents; and if they drink any deadly thing, it shall not hurt them.” (I’m no theologian, but isn’t there also a passage that says: “Thou shalt not tempt the Lord thy God?”)
Yet, despite having a premise seemingly made for endless secular mocking, Poulton and Savage treat their setting and characters with great care and attention. These are people molded and shaped by their faith, a place that is sustained by the small band of followers who gather to worship and, occasionally, try their luck by diving into a box of wild reptiles.
At the heart of the film we find Mara (Alice Englert), a pastor’s daughter plagued by a transgression that threatens both her faith and her relationship with her father Lemuel (Walton Goggins). A key flashback hints at what will soon be revealed as Mara’s secret — a big one, even if it is a typical one — but Poulton and Savage manage to avoid played-out tropes when it comes to building Mara’s story.
Mara becomes engaged to Garrett (Lewis Pullman) a fellow member of the church, but has been secretly impregnated by an ex-church member named Augie (Thomas Mann), and the big question is whether she's ultimately going to escape from the clutches of her father and his people or succumb to the clearly repressive and superstitious life that she's known since birth. It’s not that Mara wants out of her small community, however, it’s just that she can’t help wanting more, a complication no amount of praying can help (much as she fervently believes otherwise). And her palpable confusion is only exacerbated by men and women who only deal in absolutes and certainties.
Despite the abiding nature of their faith, however, there appears to be very little joy in the community. Cinematographer Brett Jutkiewicz washes out their world in dark shadows, cloudy grays, and a flat palette that telegraphs desperation without being heavy-handed. Houses are dim, damp, and crowded. Even outdoor scenes are claustrophobic, with even the trees pushing in a little too close.
And while the film constantly teeters on the edge of redneck-sploitation it never succumbs to it. Alternately settling into a low-key lament for poor people trapped in impossible circumstances, evolving primarily, into a movie about monsters, only the monsters are parents. Parents who won’t hesitate for a moment to jeopardize their own offspring’s lives in the name of God — or more accurately, in the name of their insane, cultish, and literally criminal devotion to their conception of God.
This is a beautifully crafted film that takes the audience into a bizarre reality that is rarely ever given any attention. And while I can appreciate that someone’s faith is their faith, and no matter how bizarre it might seem to others, they should be free to practice that faith without impediments. Unless of course, their faith involves rituals and beliefs that could seriously injure or possibly even kill someone. Psychotic behavior cloaked in religion is … well, psychotic behavior. Which makes the subject matter of the film undeniably arresting. But rather than sticking to incisive subversion, the film opts instead for expected resolutions that make for a tidy ending, but do little to answer lingering questions. In the end, it’s all still a matter of faith, unfortunately for the characters, and by extension ourselves, it’s a faith that doesn’t always answer back.
Labels: Movie Reviews