Book Review: Against the Web: A Cosmopolitan Answer to the New Right 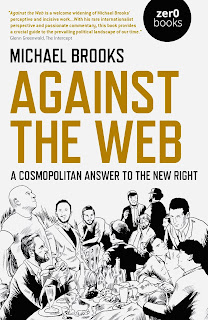 Against the Web: A Cosmopolitan Answer to the New Right by Michael Brooks
My rating: 3 of 5 stars

Michael Brooks’ much anticipated book, Against the Web: The Cosmopolitan Answer to the New Right arrived at my doorstep several days prior to his untimely death on July 20th. So I read this book in a state of both grief and enthusiasm.
Admittedly I didn’t know Brooks that well, but the few interactions I did have with him were always pleasant and I learned a great deal from him. He was hands down one of the smartest political and analytical minds we had. And I absolutely would not be where I am today were it not for his inspiration and encouragement. I only wish I had gotten to know him better.
Brooks was likewise one of the left’s most ardent critics of the “Intellectual Dark Web” (IDW), a jokey psyop branded by the forever boring toad Eric Weinstein which captured a cluster of pundits united by “free speech” and, in effect, reactionary politics. First formed in 2018 as a stylized constellation of varied rationalist classical liberals and conservatives with anti-left agendas. Even though the IDW really had no idea who or what the left was/is, as evidenced by their ridiculous posturing, and at the time of this writing, has in fact been declared dead. All that remains now of their ridiculous and obvious ecology, is the hysteria that surrounded them. Which has mostly subsided, though some reactionary leaders and followers remain unrepentant. Nevertheless, it’s time for a post-mortem dissection, and reconfiguration, of their discourse. Which is exactly the reason Brook’s wrote this brief, yet concise little book.
IDW ideology is expressly, nothing but a rebranding of old-style cultural conservatism. And it’s easy to point out. They only ever speak of cultural issues, never policy issues. They prefer instead to dwell on their own victimhood at the hands of regressive liberals. As Brooks observes in some of the opening chapters, these reactionary figures, have projected a narrative of cultural victimhood going back to the earliest days of William F. Buckley Jr and the National Review. This in particular, Brooks says, has been key to their popular appeal: by masking their conservative politics with a rhetoric of reason, open mindedness, and free inquiry, members of the IDW have been able to brand themselves as “unclassifiable renegades” despite holding what are obviously right-wing views (the New Atheist movement — in many respects the IDW’s forerunner — employed an identical tactic). Against the Web thus sets out to be a case study in the way that reactionaries have begun to repackage their project of defending traditional hierarchies. Sam Harris’s supposed defense of enlightened liberalism can now be exposed as nothing but run-of-the-mill cultural chauvinism; Jordan Peterson’s ramblings about mythological archetypes, lobsters, the chaotic feminine, and the “postmodern neo-Marxist” left as ahistorical fiction; Ben Shapiro’s laughable narrative of American greatness as little more than an exceptionalist fairy tale.
Still, and even though it’s easy for critics like Brooks and myself to acknowledge what people like Peterson, and the IDW as a whole, are right about, we are also very tired of doing it. We share many common values in enlightenment principles like reason and free speech, but we very obviously execute and advocate for them quite differently (and I would say better) in the political space. But the request to entertain the positive traits of the IDW is often a trap to solicit concessions and ignore the critique.
And so, while in many ways this book may feel like a victory lap; it’s still a race we haven’t quite won yet. We still need to win politically, and we must lead the public discourse in better directions. And at a brisk eighty-two pages, this book manages to cover a lot of ground all the while doubling as a handy reference guide to the most popular reactionary figures of the present moment and their bestselling intellectual hokum. The book also serves as a timely warning about the dangers of reflexively dismissing the IDW’s popularity, or surrendering to their often confused and alienated audiences.
Unlike many on the left, however, I still have a fair amount of respect for a few of these intellectuals, Ben Shapiro and Dave Rubin excluded, and to varying degrees some of them have been very influential in my own intellectual development. But by no means do I aspire to be counted among this freewheeling group of country club philosophers any more than I’d want to be lumped together with liberal Democrats. (I’d also like to point out that if you consider Ben Shapiro one of your sharpest minds—you've got a really stupid movement). Which is why Brooks spends the necessary minimum amount of space steel-manning his opponents before critiquing them, and at the same time, mocking them ruthlessly with his trademark humor.
The usual suspects will of course cry "Ad Hominem" whenever they see someone smarter than them milking humor from their nonsense, but don't be fooled. Brooks isn't just funnier than the opposition. He's a lot smarter and more insightful. It won't take you longer than a few sentences to figure that out, and no more than a couple of hours to read, but you’ll be left thinking about the book long after you put it down.