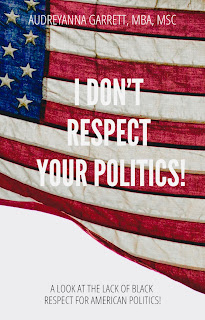 I Don’t Respect Your Politics! by Audreyanna Garrett
My rating: 4 of 5 stars

At a time when one video after another has surfaced, forcing us to acknowledge, once again, that many unarmed African-Americans are regularly gunned down by the police, Garrett desperately wants her readers to confront the sources of that violence in our nation’s longstanding culture of white supremacy. But she also knows how many political arguments and sociological studies have fallen on deaf ears. And so rather than a treatise, we are treated to a fiery sermon, and an unabashedly emotional, personal overture. The result, is one of the most frank and searing discussions of race I have ever read. Yes, there’s some controversy in what Garrett states, but it will also open a lot of eyes. To get her readers to that point, Garrett chides as deftly as she uses outrage and sorrow, but her point never wavers: we will not fix this country until we get to the roots of racism.
Many white readers may wince, upon reading about their own indifference to black suffering named with such precision, and some, desperate not to face their involvement in America’s systems of racial oppression, might abandon this book altogether. But that would be to miss an essential lesson. For again and again Garrett makes it clear that more than white guilt, she seeks action, and more than condemnation, she wants change. She wants readers to awaken from their slumber of ignorance about “what it means to be black in America.” Reading her praise for James Baldwin, I couldn’t help thinking that the same is true of Garrett herself: “I love America more than any country in this world, and exactly for this reason, I insist on the right to criticize her perpetually.”
Nevertheless, there will still be those readers who will insist upon rejecting Garrett’s central premise. The type of readers who are far too often frightened, indifferent, or ashamed, to look a woman like Garrett in the eyes. Even sympathetic readers might mistake this extraordinary work for merely a catalog of white sins. But Garrett is all too familiar with these claims of innocence and the knee-jerk defensiveness that will surely greet this book, and so sets out to conquer such denial not only with difficult truth but also, astonishingly, with love. She relays these truths with an open, yet stern gentleness that I felt was more powerful and not readily found in so many other writers. Which is why this book matters. And if you're reading it any other way, I think you're missing a profound experience. Because I've never been shown, nor made to understand, the experience of a life so unlike my own as I have with this book.
Garrett, however, is not an optimist; but neither is she a cynic. She justly postulates that to be black in America is to be automatically stigmatized and viewed by society (and the state) with suspicion and, often, as less than human. And throughout the book she recounts several rueful manifestations of this stigmatization from her own past, helping to illustrate where, and how, we continue to fail as a nation. All the while underscoring a powerful, if forgotten, truth: that giving a voice to those who have been too long marginalized in our politics, particularly women of color, can only help strengthen our democracy.
This is not a book that will leave you quickly. And you should be prepared to pause nearly every other sentence and absorb what is being said. The book is meant to change your thinking. Granted, the average reader may still not fully be convinced, but they can hardly remain unmoved by Garretts’s fiery prose. Her writing is prolific from start to finish and her book is aptly titled and extremely well written. And in response I can only very humbly say: Amen.