Book Review: A Time and A Place 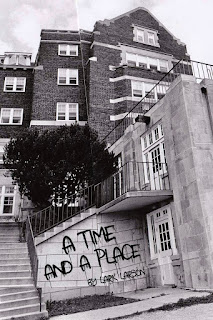 A Time and A Place by Lark Larson
My rating: 4 of 5 stars

It’s rare for words alone to make a man throb and ache for release. But that’s exactly what Larson has managed to accomplish with her debut novel A Time and a Place.
I hardly know where to begin. It's an odd task, reviewing purely erotic work. A good quarter of the time, the book works solely as pornography (and I use the term in a descriptive sense, not a judgmental one); the rest of the time it’s a rumination on the nature of desire and pleasure and the experience of living a life that is specifically arranged to let desire and pleasure have their way with you. It’s titillating, dryly funny at turns and sometimes exceedingly puzzling. It’s also a delightfully immersive read, all at once playful, campy, explicit, erotic, and provocative. And provocative it is. This book would have made Caligula blush.
Throughout the book Larson remains unapologetic about her adoration of cocks, and lots of them, preferably all at once. And she never adopts that half-defensive, half self-congratulatory tone of so many other women writers who fancy themselves as sexually free; her sentences never scream, "Look what a groovy libertine I am!" Larson’s sex scenes are not incidental, either, they are the meat of the plot, the crux of the conflict, the key to at least one, and possibly all, of the central characters. “If you want to speak about sex in a novel or any "ambitious" writing, today, in the 21st century,” writes French author Catherine Millet, “you must be explicit. You cannot be metaphorical any longer."
I'm not sure Larson’s writing is that ambitious, but she has certainly understood the part about not being metaphorical. Not long into the book, her descriptions of tangled limbs, spelunking tongues and many, many stiffened cocks achieves a kind of somber formality; yet as you grow accustomed to such details, they become less and less explosive, although not necessarily less erotic. In that respect, Larson’s vivid descriptions of various arrangements and tableau carry on the tradition of Sade. And her freedom with the language recalls Henry Miller, although her prose isn’t quite as polished.
This isn’t a titillating read masquerading as an intellectual treatise however: It's rather, unapologetically both. But what's refreshing about it is Larson’s raw confidence, which works like a charm: We hang on every word. Her sensuality is written on the page not in blurred curves and soft moans, but in a sign language that recognizes the beauty of a good stiff cock, and in the sense of fulfillment and heightened self-knowledge that comes with taking charge of it.
And yet, buried within the text we find a contrasting message. We think we want sex. But maybe it’s not always about sex. Maybe it’s intimacy we want. To be touched. Looked at. Admired. Smiled at. Laugh with someone. Feel safe. Feel like someone’s got our back. That’s what we crave most of all. But then again, sometimes you just want to have your brains fucked out. Larson understands this impulse, perhaps better than most. Which is why her style reads as if she's late for a meeting with a sex scene. Her voice is quite different from anyone else I’ve read in the same genre: meticulous, inventive, radical and conflicted. And Goddammit I've been infected by it. After 238 pages of it, you will be too. I'm going to read it again. God help me. I can’t help myself.