Book Review: Bullet Points and Punch Lines: The Most Important Commentary Ever Written on the Epic American Tragicomedy 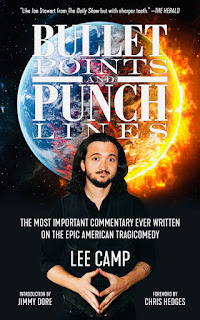 Bullet Points and Punch Lines: The Most Important Commentary Ever Written on the Epic American Tragicomedy by Lee Camp
My rating: 3 of 5 stars

It’s often hard to report on U.S. politics and government with a straight face. It’s even harder to report on the usual reporting on U.S. politics and government with a straight face. So much of it is beyond the reach of parody. Yet it also opens up opportunities to shock people with basic facts. Facts like: the stock market going up is not a good thing. Wars don’t expand human rights. Muslim terrorists are not in the top 1,000 threats to your health. Russian Facebook accounts are not in the top 10,000 corrupting influences on U.S. elections. The amount of money the Pentagon spends every year is $100,000 times $100,000 times $100 plus more than you can truly comprehend. (Also, Michael Bloomberg is not an impressive or serious person).
I’m old enough to remember comedians like Jon Stewart who would regularly interview war criminals and oligarchs on TV asking questions like: “How did you get to be so awesome?” and then excuse themselves with the line “I’m just a comedian” or with the apparently serious claim to be taking a stand against ever taking a stand. Camp’s form of comedy however, is different. He takes a stand on everything. With the understanding that calling it comedy doesn’t give him a license to wimp out. Rather, it gives him a license to exaggerate to make a point more powerfully. And in his new book, Bullet Points and Punch Lines, he takes on America’s bullshit with both humor and, well....outrage.
Written and published long before Covid-19 spread across the world, and before we were facing a future of great change, Camp offers us a reminder of how crazy the system we’ve been living in, along with witty analysis of what really needs changing, might just help us focus on the kind of world we want to see develop, and steer us away from a return to the ‘normality’ which our media and elites have constructed around us.
His routine generally consists in taking a story from the news, mostly from independent outlets like The Intercept or the Grayzone, and usually a story that no late-night talk-show comedian would ever touch, and uses the story to educate — and does so with what I think of as simply appropriate annoyance and mockery but what most people would call satire, sarcasm, and similar dirty words. Undermining the normalization that our ruling elites rely on to fool us. Making this book highly informative as well as entertaining, but of course what one most hopes is that his approach is able to reach a different audience from those that already have some general notion of what planet they are living on.
In order to truly know what is going on in the world right now, one must turn to the comedians. The ruling elite with their lapdogs in public office, their sycophants in the media, their foot soldiers in the security agencies, and their stormtroopers in law enforcement, hold the rest of us in utter contempt. If it weren’t for the courage and determination of Camp and a handful of other truth-tellers such as Jimmy Door and Chris Hedges, we would know nothing of the deceptions, propaganda, and fairy-tale narratives spun and spewed 24/7/365 to keep everyday citizens disoriented, distracted, dysfunctional, and powerless. Worst of all, we would have no inkling that a government which serves all of the people, a society which makes it possible for all members to benefit from the vast riches and opportunities of the richest nation in history, and a future which respects the talents and potential contributions of everyone, not just a privileged few, is not just possible, but begs us all to “keep fighting” for what we genuinely believe in.