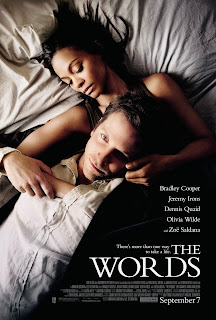 Directed by: Brian Klugman and Lee Sternthal
My rating: 5 of 5 stars
Almost every word Hemingway wrote in the years immediately prior to 1922 was lost by his first wife Hadley, who packed the pages in a briefcase and subsequently lost them on a train. (The manuscripts were never recovered). There’s hardly an American lit student alive who hasn’t heard this story.
Hemingway's lost prose lives on, in a sense, in Brian Klugman and Lee Sternthal’s The Words, which is a movie that contains multiple references to Hemingway, not just the story referenced above, but also the commemorative plaque to Hemingway Rory (Bradley Cooper) and Dora (Zoe Saldana) view during their honeymoon in Paris. Roger Ebert in his review for the film, likewise points out the similarity between the name of the character "The Old Man" and Hemingway's novel The Old Man and the Sea. (He also points out the strange commonality of the name Dora among the wives of so many twentieth century novelists).
And so at first glance The Words may seem like a film about literature, but it isn't. Although Clayton Hammond (Dennis Quaid) reads from a novel, there's no suggestion that we're dealing with the Son of Hemingway, or even the Cousin Of. The film ingeniously avoids quoting more than a few words from Hammond’s Hemingwayesque novel. Still, the movie does slyly leave open the possibility that his novel is the story of his own life.
Most of the movie is about novelist Rory Jensen. Who, along with his wife, are convinced that greatness seethes within him. Rory's wise old dad (J.K. Simmons), who writes the checks that keep Rory at his desk, cautions his son, however, to know his limitations. But The Words is an all-American story made in Hollywood — the earnest Big Ideas debut of two screenwriters, both fans of Ernest Hemingway and John Fante, those tragic titans of literature who, directly and indirectly, push their way into the action. So it's not limitations that are on the table so much as the recognition of genius, and this is where Rory's troubles really begin. And in a battered old briefcase picked up by his wife in Paris, Rory finds the manuscript of an enthralling tale penned long ago by a young writer about his sacrifice of the woman he loved for his art.
Frustrated by his own failure to publish, Rory passes off this manuscript as his own. A glitzy new-school editor (Zeljko Ivanek) pounces on it; success follows, along with the literary high life Rory had always dreamed of (Charlie Rose, black-tie award dinners, the works). The glory is tempered only by the occasional quick twinge of existential unease. And so it takes a while for Rory to notice the Old Man (get the reference?) who's been hovering around the margins of his sleek new life, and who eventually confronts him in Central Park, where Rory is enjoying a quiet moment resting on his laurels on a park bench. The Old Man (Jeremy Irons) isn't looking for justice, however, or even a cut of the royalties, nor is he looking for a public apology. He simply wants Rory to understand that he has stolen another man's life and work. Fair enough, but here the movie veers off into extended flashbacks to a World War II Paris full of cobbled streets and sepia tones, where a peculiarly bloodless drama plays out in which the Young Old Man (Ben Barnes) neglects his grieving wife (Nora Arnezeder) — they've just lost a child — to work on a story that just pours out of him. And lest this theme is lost on you, it's repeated twice more in a blaring, triple-layered structure in which another writer (Dennis Quaid again in excellent devious form) folds the Old Man's story into Rory's, only to have his own unsavory past laid bare under pressure from a lovely, skeptical graduate student (Olivia Wilde).
The Words attempts to draw parallels between the different stories, but too much connective tissue is missing. On the whole, there's a sense that the project started life as a longer and more complex examination of love but was considerably reduced along the way. The element that survives is Rory's ethical dilemma regarding publishing another man's work under his own name, especially when that man comes forward. That aspect of The Words is effectively developed and well handled. We can feel Rory's guilt and understand the uneasy excuses he concocts to placate his conscience. On the night he receives a prestigious award, there's little happiness for him. He laments that: "it was only supposed to be a small book."
Yet, overworking its heavily romanticized tragedy (last time I checked, most writers reconcile marriage and work with no more trouble than the rest of us) The Words founders on a spurious dichotomy between love and art. Which is a pity, because the movie is smart and persuasive in the casually incremental way in which plagiarism becomes an option for people like Rory — and perhaps for anyone. He's just copying good writing to start with, then quietly, only slightly furtively, the stolen property is gradually rationalized in his conscious mind, until he can't see the train wreck for the tracks.
At its best, The Words asks: "How shall we live?" — a good, honest question about ethics rather than love, and well worth asking in an era whose cultural conversation is often dominated by "How can I win?" (At its silly worst, it's all about those men who undervalue the missus). But it’s also a meditation on literary merit, artistic ambition, authenticity and conscience, set in New York's publishing world, featuring stories within stories and propelled by an unreliable narrator. Which aims for a tone of postmodern ambiguity about how these three competing stories fit together to form one coherent truth: Never love words more than the people who inspire them.
Labels: Movie Reviews