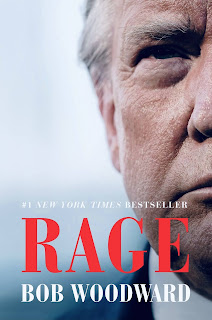 Rage by Bob Woodward
My rating: 3 of 5 stars

When you’re actively working for the president of the United States, you can’t just come out and publicly say, “This guy is a complete and total moron,” however accurate or obvious the statement may be. Yet, for more than a year now, we’ve been hearing from people in Trumps inner circle – GOP lobbyists, Republican pundits, even a few Republican members of Congress – that Donald Trump is a remarkably stupid person. (Need it even be said that the challenge in interviewing Trump is not getting him to talk, but gleaning anything meaningful from the conversation?)
Even so, and much like any other truly stupid person, Trump prefers to think of himself as rather brilliant. Especially at identifying the intelligence of those around him. He has claimed that George W. Bush is “a stupid moron” and that Barack Obama isn’t that smart either, but instead “highly overrated” – and a poor speaker to boot. (A broken clock may be right twice a day, but it still can’t tell the time). And he continually rants about the weakness of other people even as he demonstrates his own. Perhaps this lies at the root of his monumentally dumb decision to grant Bob Woodward 18 interviews. (Trump clearly thought he had the ability to charm an associate editor of The Washington Post).
But hold on. I have to catch myself here. It would be dangerous to underestimate Trump. I don’t want to characterize him as merely stupid or inept, because stupidity and incompetence are the plausible denial of malice. Trump is actively destroying the underlying fabric of the country and if Biden is elected he will inherit a skeletal government in such disarray that it will have to be rebuilt from the ground up. (Remember this in 2024 when the GOP will inevitably claim Biden, along with his fellow Democrats, didn’t “do anything” for four years). And my heart goes out to every hard working American that has been screwed by this half-witted autocrat. (To those struggling and still supporting him; keep supporting him and you can continue to suffer under his thumb).
Woodward isn’t the first author or journalist to portray Trump as a threatening, deceptive, paranoid narcissist who’s in way over his head. But he is the first to render Trump proving the point from his own mouth, over and over again, apparently without knowing it, which makes him more threatening still. And the gasoline the president pours on himself is, even by his standards, remarkable. For that, Rage is a treasure trove.
But what profound insights did these conversations yield exactly? You’ve no doubt read or even heard the biggest scoop: Trump knew back in January that the coronavirus was much deadlier than the flu, that it spreads through the air, that it kills not just the elderly but young people too. Yet he told the public, time and again, that all was well, that the germs would soon vanish—and, even now, he encourages thousands of barefaced supporters to attend jampacked rallies, makes fun of Joe Biden for wearing a mask, and pressures the Big Ten colleges to resume their football schedules for his entertainment. Contrary to what was thought at the time, Trump didn’t just ignore the scientists or wave away their advice on how to handle the pandemic once it took off. No, he understood their analysis and forecasts perfectly well. He just decided not to do anything about it—and, worse, he encouraged others not to do much either. Before we could only speculate that Trump was personally responsible for the deaths of hundreds of thousands; now we know it. What Trump thinks is justified is, in this context, mass murder.
Overall, however, Rage is not hard-hitting journalism. The only “news” was on the coronavirus and that had already came out. (And all of it was in the prologue so reporters with advance copies could easily reference it). The book also has no coherent theme, analysis or continuity between chapters. Had Woodward narrowed things down a bit, forming a more cohesive story, it would have served the subject matter better. The closest Rage comes to a structure is a talk-by-talk, blow-by-blow of those precious moments, beginning on Dec. 5, 2019, with a conversation that lasted — Woodward proudly informs us — 74 minutes. Likewise, the book would have been better had it had a tougher tone. (Woodward was just too deferential for me, even going so far as to give Trump advice). With a title like Rage, you might imagine King Lear-like diatribes against Democrats, or some Trumpian version of Nixon talking to the portraits, third martini spilling onto the West Wing carpet. And you might also rightly imagine the stenographer of that rage rendering it with a clarifying fury of his own. But the book just doesn't quite get the rage endorphins going in the same way Woodward’s first book did. (Although, it could be the case that the current administration has simply dulled my rage receptors with it’s constant overload of bullshit).
Nevertheless, and after having allowed Trump to defame and disqualify himself, Woodward concludes the book with the observation that Trump is the wrong man for the job of president; (I’d also add that someone who is so thoughtless, so unfeeling, and so orange-tinted, doesn’t even qualify for membership in the human race). Moreover, and in the same way the Inuits are said to have dozens of words to describe snow, it’s now time for Americans to delineate all the many different ways that Trump is dumb. And if Woodward’s new book teaches us anything about the character of the 45th president of the United States, it’s that we don’t yet have the words to describe the multiple variants of the vacuum inside his head.