Book Review: We Live Inside Your Eyes 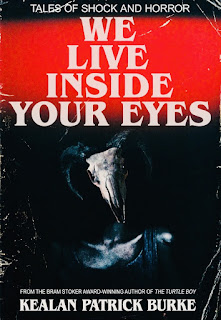 We Live Inside Your Eyes by Kealan Patrick Burke
My rating: 2 of 5 stars

I’ve long considered Kealan Patrick Burke to be something of a throwback. I imagine him as one of those long-ago pulp writers churning out stories by the fistful, back when magazine racks were brimming with periodicals hungry for readers. And like them, Burke never seems to run out of ideas, always finding fresh approaches to the tropes of his chosen genre.
To understand what I mean, look no further than his latest collection We Live Inside Your Eyes, which is a batch of “scary” stories that run the gamut from haunted houses to things hiding under the bed.
I flew through this collection of stories, not because I loved them, but because I was trying to find one that didn’t disappoint me. You see, the problem I have with Burke, and in particular this collection, is that he never seems to know how to end a story. There’s also no urgency in any of these tales. Neither are they thrilling. Of course, they don’t need to be, but they should at least have compelling enough characters or, hell, written with some semblance of competency. His anthology reminded me a lot of Clive Barker’s Books of Blood (Vol 1) which I also thoroughly hated. Both were boring with no development. Sloppy, endless adjectives strung together to emulate actual stories. Descriptions that lead to nothing and nowhere.
Burke also has some pretty awful and irksome writing habits. He consistently writes poorly—and I don’t believe it’s accidental. This book is filled with extremely short and choppy prose, cluttered with too many commas. (Josh Malerman also writes short choppy sentences, but to a poetic effect). The whole book was in dire need of editorial intervention—about half the words on every single page were superfluous, repetitious, and added nothing but clumsy and awkwardly awful clunkiness. (I don’t need a description of people’s faces every single time they happen to utter a word).
I will however say, that his story The House on Abigail Lane was worth the price of admission. It’s literally one of the finest haunted house stories I have ever had the pleasure to read. It has an almost perfect setup; wonderful. I suspect it would also make a terrific film in the right hands. It’s by far the best story in the collection. But this is a bit like saying it’s the best turd in the bowl and the ending, again, was, in a word, stupid.
Towards the end of the book Burke provides the reader with a few Story Notes in which he supplies commentary on the stories populating his compendium and in which he also makes the following statement:

“There are over a million words of unfinished stories in my files. Over a million. Most of it will never be seen by human eyes, but every now and again I’ll go in and have a peek at what’s there.”

After now having had a “peek” I can honestly say: He should have left these stories on his hard drive where they belong. Better yet, he should have taken that same hard drive out into an open field and “Office Spaced” the shit out of it while the Geto Boys wail: “Die muthafuckas, die muthafuckas!”
I don’t mean to be crass. (Yes I do) It’s just that as I’ve gotten older I’ve come to realize that short story collections aren’t really my thing anymore. I struggle with them. I’m not sure why. Of course, there are a few (very few) authors that I will go out of my way to read anything and everything that they put out, short story collections included.
Nevertheless, this collection does invoke a writer with a great imagination, one filled with beautiful and vivid imagery and each story attempts to have great depth. And I am in awe of Burke’s creativity. But for fucks sake man, figure out how to end goddamn story!