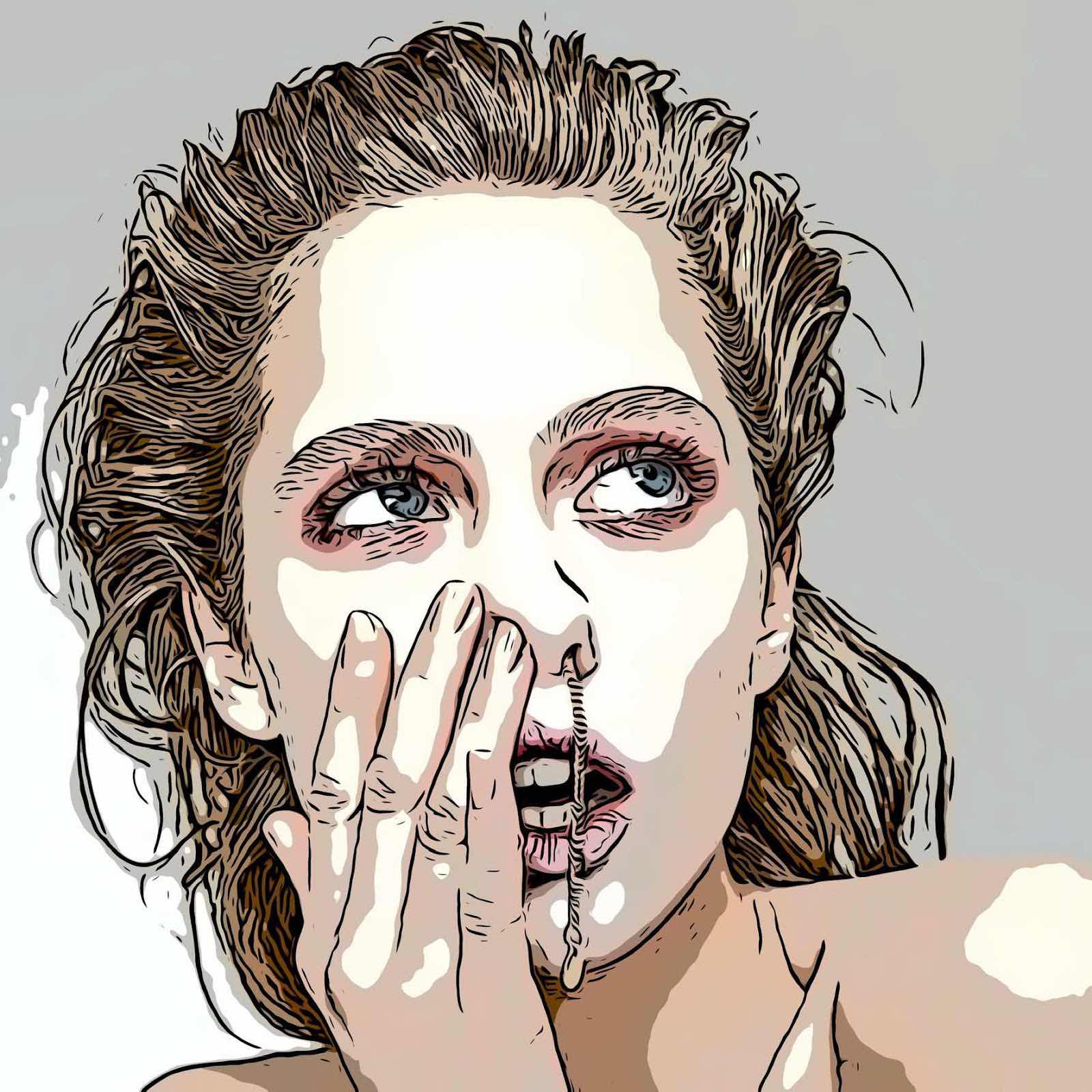 Interloper
I caught a wasp this morning, pinned
between a plastic drinking glass and a napkin,
carried her outside like a prisoner, like a queen.
It’s funny, I’m really not that person. Insects
that make it into the house don’t make it out,
especially if they have stingers. But something
about her crawling every inch of the kitchen
window, seeking a crack that would set her free,
made me catch and release. Eventually, the cat
would have killed her, toyed with her maybe,
ripped wings and legs off one by one.
But I let her go, set the upside-down glass
on the patio table, tipped it over and darted back
inside, gave her a chance to flee without seeking
revenge. Slid the glass into the dishwasher,
the napkin into the trash. The window’s clean,
a clear view of the deep purple flowers on the tree
next to the deck, and I could understand her
confusion, how the world she knew seemed so close
but she couldn’t find her way back to it, the pane
a near-invisible obstacle, meeting every desperate stab
with firm resistance. I’m not old, but I’m getting sentimental
with age, I think, crying at the ends of romance novels
and fumbling with gentler feelings. I used to think
myself above everything, and now I just want to be
in the thick of it all, the corny and trite, the unoriginal,
We repeat the same words because they’re true. We hold
hands because the feeling of closeness never gets old.
If it does, heaven help me. Or hell or whatever nothing
lies beyond. Prayers were part of the former me,
but the farther I get from faith, the closer I feel
to everything.
Synergy, or: Codependence
Last night I buried
my face beneath
your jaw, tried
to memorize every
line of your body
with my eyes closed.
Almost cried, nostalgic
for something right
in front of me. I can’t
be without you, like
a fool, like a lunatic,
and I’m not sorry.
Every night I was
gone, I thought
of you, the warmth
of your body, your
hand reaching out
in the night
to make sure I’m still
there. I’ve never
learned to say
what you make
me feel, vast
and longing, growing
deeper all the time,
till I think it might
swallow me up
like a whale,
and I have never
wanted so much
to be devoured.
Do Not Talk to Me About Heaven
cramped, dark room, her body
fluttering above my head.
still there, her hand seemed to wave
fingers traced the swelling—
lungs, heart, feet, hands, head.
phrases circled—too far, too much,
too severe, no chance.
awake until four a.m. writing letters
in the dark.
five months. hidden on a side street.
wish the darkness was total.
emptiness stepping into
the silent hallway. a sudden chasm.
left town for two days, came home
empty-handed.
bleeding, milk leaking, tears
in the shower, in bed, sitting on the floor
in the corner, staring out
at blossoming pink flowers
in the backyard.
not a mother, that’s the problem. new
self built around this thing created
from nothing, creature that made me sick
and turned my thoughts and carved
a space in my heart to nestle into.
do not talk to me about heaven
sometimes smile and pretend as though
there is anything on the other side
of this, as though the old me
will suddenly stand up and take my life
from my hands.
inside shrinking, shuddering, curled
into a position not unlike hers
the last time. dig a hole and slide
into it. keep digging.
catapult bricks through windows,
set buildings on fire, tear down
walls
and scream.
Ode to the Fast and Furious Franchise
Never loved cars but worshipped action
since age eight (one of the few good things
my father gave me). But more than that—
the feeling of building a family from pieces,
from the ground up, not by blood, or just blood,
but stumbling across one another, pulling strangers
into a bond that stretches across decades and counting.
Knowing no one’s ever really gone, but could return
at any moment, engines revving and eyes liquid-bright.
The simple stupidity of it all, the unreality, but also
the beating heart of every flying car and heist, every
illogical jump and flight to space in antique diving suits.
I do this for you because I love you, because we
have found our way into a family by touch, by tone,
stronger than any ties. If you call, I will answer.
And deep down I just want to feel that certainty,
that the ones I love would cross borders and tunnel
beneath crumbling earth for me, because I would
do the same.
Remnants
We saw a dead bird on our walk
the other day. A blue jay once, now
a lump of blood and feathers.
There’s something exhausting
about death, in all its permutations.
I never learned to accept it, only
to see the end as yet another beginning,
a land to be conquered. I come, after all,
from a long line of thieves and murderers,
more focused on the glory of victory
than how it is seized. My dog sniffed
the dead bird with curiosity, but I see
every death as a tragedy. Every squirrel
crushed on the road, every corpse
of a deer along the highway, each silent
ambulance and plain obituary—I feel
nothing casual. I grew up running
from death, leaning all my weight
into the hope of forever, but these days
eternity feels far more terrifying than quiet.
The next day, the bird was gone. Stolen
by a stray cat or cleaned up by the caretaker
in his red truck, who knows. Only a spot
of blood remained, dried and nearly blended
into the concrete. 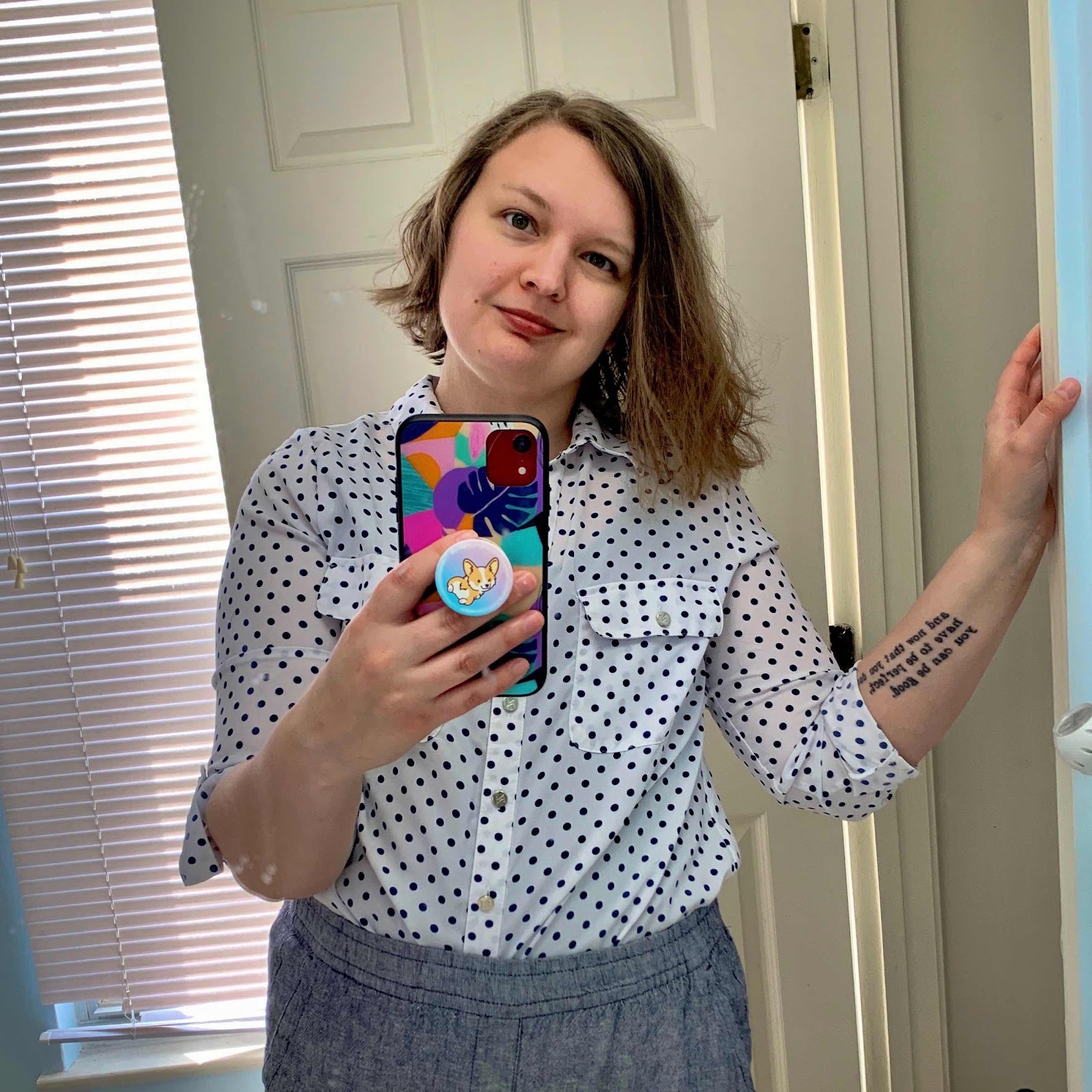 Savannah Cooper (she/her) is a leftist bisexual agnostic and a slow-ripening disappointment to her Baptist parents. You can almost always find her at home, reading a sad novel or cuddling with her dogs and cat. A Pushcart Prize nominated poet, her work has been previously published in Parentheses Journal, Midwestern Gothic, Mud Season Review, and multiple other publications.
Poetry